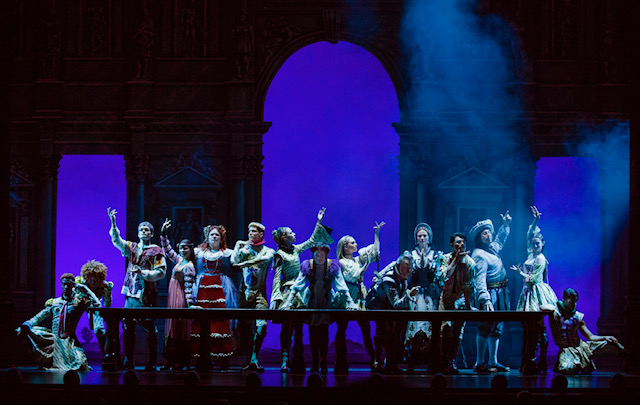 If Something Rotten and Mamma Mia had a love child, Head Over Heels might be it. It’s a high-spirited, saucy jaunt radiating with positivity. If the music alone doesn’t hook you, the underlying theme of love and acceptance should.

The musical is inspired by Sir Phillip Sidney’s Arcadia, a seldom read literary work written for Phillip’s sister towards the end of the 16th century. This stage version, which also takes place in Elizabethan times, reimagines Phillip’s work for a modern age. Here, after an oracle foreshadows impending ‘doom’ for Arcadia’s royal family, the king and his royal court flee the kingdom. Ending up quite literally right back where he started, the king comes to the realization that the only way to save his precious homeland is through unconditional love, thereby creating a more utopian Arcadian ‘beat’ wherein he, she, and they are treated as equals.

The show had its world premiere at the Oregon Shakespeare Festival in 2015, and after an out-of-town tryout in San Francisco last spring, it opened on Broadway.

Having been with the show since its inception, Bonnie Milligan is making her Broadway debut as the beautiful princess Pamela. A vocal powerhouse, her standout performance is nothing short of a comedic tour de force. If her hilarious rendition of “Beautiful” at the top of the show is not enough to convince you of that fact, then her undeniably fearless and show-stopping display during “How Much More” surely will.

Peppermint, best known for being the first runner-up on the ninth season of ‘RuPaul's Drag Race,’ is also making her Broadway debut, playing the non-binary oracle Pythio. She has the distinction of being the first transgender woman to originate a Broadway role, and from the moment her character slithers towards center stage, she commands the room with wit, wisdom, and prowess befitting a comedienne extraordinaire.

And returning to Broadway as Arcadia’s sharp-witted queen is stage veteran Rachel York. York exudes elegance and poise with a steady droll that balances out the show. Notable too is Taylor Iman Jones as Mopsa, Princess Pamela’s lady-in-waiting, who dazzles with her rendition of  “Vacation.”

Although this show truly runs on girl power, the men have their moments too. Jeremy Kushnier as the self-absorbed, philandering king is devilishly fun to watch. And Andrew Durand taps into his feminine side and shows off his knack for timing as the poor, lovesick shepherd Musidorus.

Director Michael Mayer keeps the show moving at a steady and frenetic pace, and Spencer Liff’s high-energy choreography fuses together jazz and clubby vogue elements that connect the songs to the storyline concretely.

Then, of course, there’s the music. The infectious beat of the 80’s girl group the Go-Go’s literally and figuratively pulsates throughout the theater. For me, hearing those songs again was akin to revisiting an old friend and had me unapologetically bopping, singing, and smiling ear to ear well into the next day. It also doesn’t succumb to the same formulaic approach as other jukebox musicals, which is refreshing.

As I began writing this review and combing through my notes, I was struck by an adage my father often says, which is, “A little nonsense, now and then, is relished by the wisest of men.”

Yes, Head Over Heels is farcical, silly, and just plain ridiculous at times, but underneath its veil of poetic verse and tomfoolery, it’s overflowing with heart.

It also has the audacity to envision a world in which all people can peacefully coexist and live happily ever after, and for me at least, that’s a vision of nowness worthy of an enthusiastic, get up and go green light.

Head Over Heels is now playing at The Hudson Theatre, 141 West 44th Street, New York. Performance times vary; check the website at headoverheelsthemusical.com. Find more information about current plays in the Chicago area on our Current Shows page and at theatreinchicago.com.