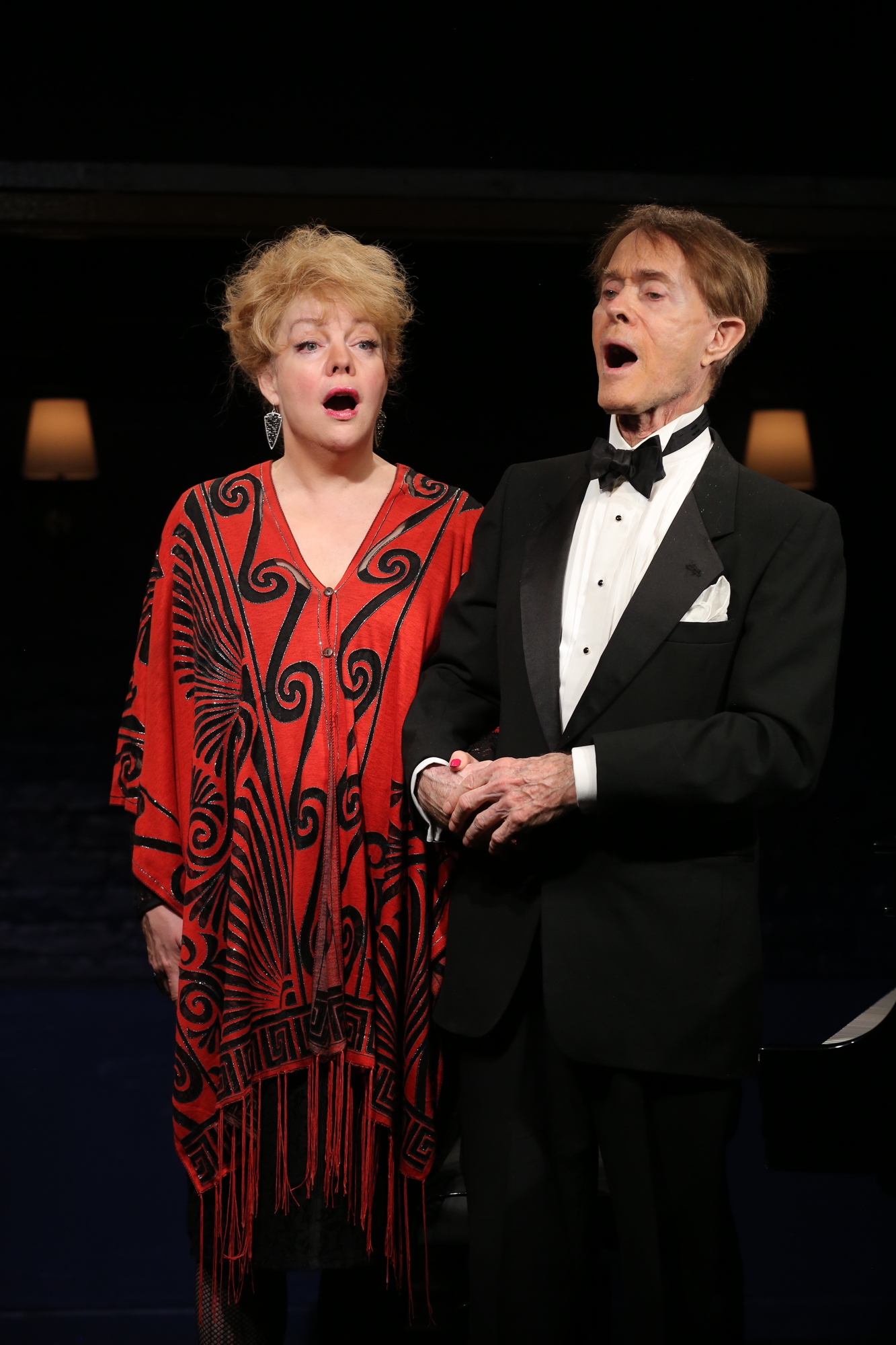 In this highly intimate cabaret show, beautifully gift wrapped in James Morgan’s sleek black, silver and blue Deco set and deliciously bathed in Michael Gottlieb’s theatrical lighting, the eighty-year-old tuxedo-clad Ross plays himself, early and late Coward (1899-1973), all the male roles, and of course tickles the ivories for which he is justly famous.

The beautiful KT Sullivan, Ross’ co-star – dressed to the nines in a loosely flowing sparkling red dress and looking younger than springtime – gets to play her continuously smiling and lovable self, other women, and a few of Coward’s more famous friends like Marlene Dietrich.

More than once both performers, thanks to Coward’s deeply knowing lyrics, bring down the house. Though laughs come aplenty, his nostalgically infused lyrics, not about to play second fiddle, continually remind us of lost loves and the inevitable fading of youth.

Alone and in duo, Ross and Sullivan perform some two dozen Coward songs, read a number of letters and first night theater opening telegrams (remember those days?) both written by and received from his fans, famous friends, as well as (yes, you might have guessed it) letters both to and from his mother.

Some are truly funny, some sad, and a healthy handful, cleverly masquerading as innuendos, are deliciously risqué. More to the point, all showcase Coward’s personal style on stage and off which an article in Time Magazine aptly described as “a combination of cheek and chic, pose and poise.”

Speaking of famous friends, Barry Day, the creator of Love, Noël floods the script with a bucketful of prominent personages. Quite a few are people that Coward both wrote plays for and acted on stage with. Yesteryear luminaries such as Yvonne Printemps, Gertrude Lawrence, Mary Martin, Marlene Dietrich, Elaine Stritch, Lynn Fontanne, Virginia Woolf, Edna Ferber, Bea Lillie, Winston Churchill, and the Queen Mother are vividly brought to life, some with a single line or two.

While a number of Coward’s songs like Mad About The Boy (sung by both Ross and Sullivan) , If Love Was All (Sullivan), and I’ll See You Again (again, sung by both), are considered American Songbook classics, many of the show’s songs are rarely heard nowadays, as poignant and as beautifully worded as they are. Mercifully Ross and Sullivan are giving them new life.

One of Coward’s most loved signature songs is Don’t Put Your Daughter On The Stage, Mrs. Worthington. As sung by Ross, it is a drop-dead show stopper. A rather long story-telling song, it starts out deceptively as gentle advice being given to the mother of a young would-be actress and ends up with Ross, verging on hysteria, imploring the mother not put her daughter on the stage.

Sullivan is a show-stopper incarnate. Obviously, with her extensive theater, TV, and cabaret background, she knows exactly how to both capture and hold an audience forever. Though the script is light and airy and peppered with some dry spots, a couple of scenes allow her acting and singing chops to shine. In two mini-scenes, too short to be more than a teaser, she laughingly channels Dietrich and Garbo. Both bring laughs.

Two knockout numbers allowed Sullivan to trumpet her formidable singing and acting chops. Her rendition of Why Do The Wrong People Travel had the audience rolling in the aisles, as did her ten-minute monologue in which she plays a pushy Coward fan. Her brilliant comedic fan channeling – recognized by every one of us whoever asked for an autograph or offered a compliment to an actor – triggered a three-minute round of applause. The monologue is a hoot. And knowing what the audience was craving, she happily milked this scene to a fare thee well.

The play ends, as it begins, on a wistful note with Ross and Sullivan singing another Coward classic, I’ll See You Again. It is a promise that I am hoping is fulfilled sooner than later.

Love, Noël: The Songs and Letters of Noël Coward opened Off-Broadway on August 1, at The Irish Repertory Theatre at 132 West 22nd Street, NYC.  It closes on August 25, 2019. Devised and written by Barry Day, it has a running time of 1 hour and 30 minutes without an intermission. For more information, or to buy tickets check out: www.irishrep.org or call 212-727- 2737.