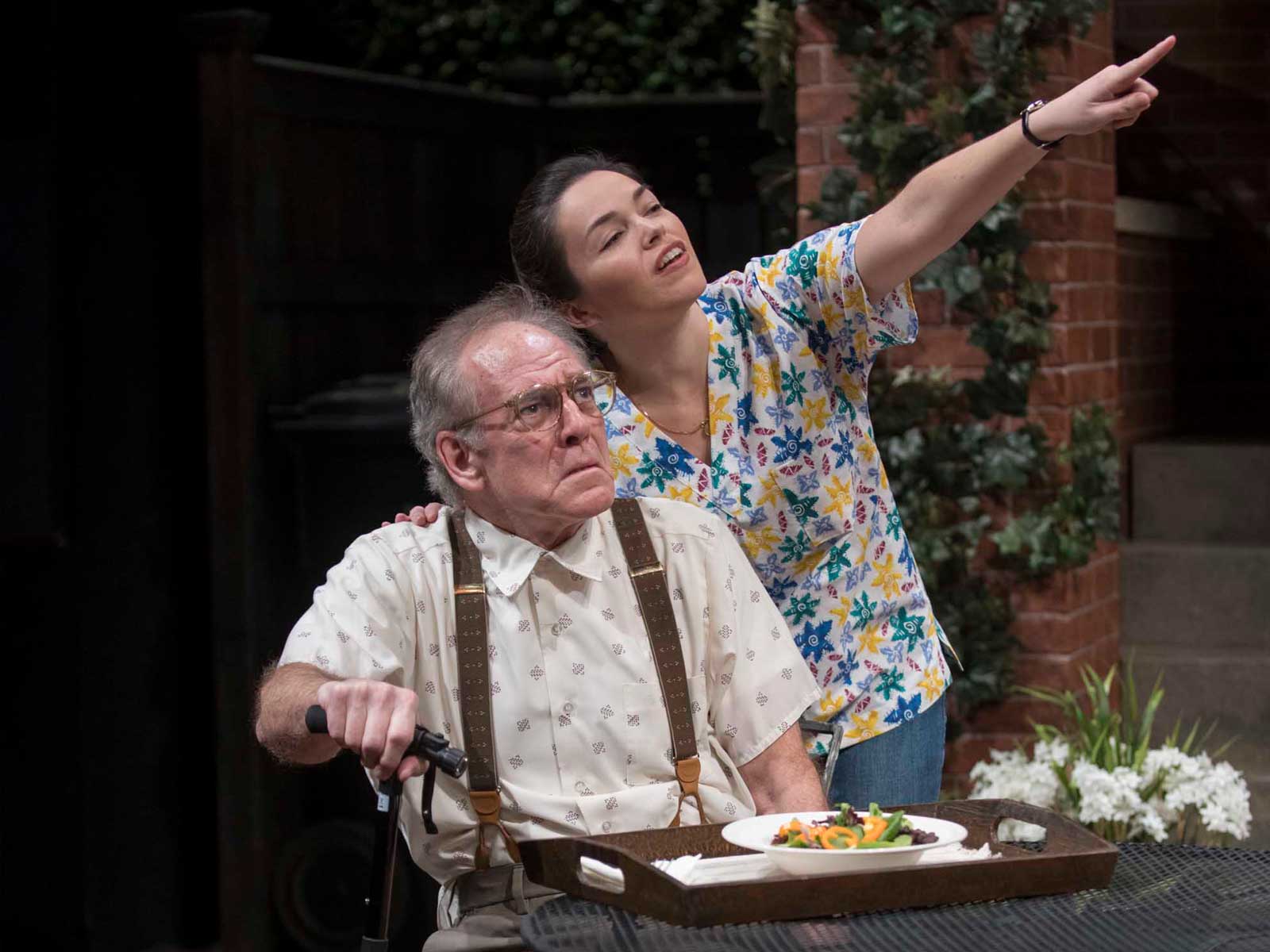 At a time when immigration is front and center in the national conversation, it is wonderful when a play comes along that tackles the issue without hitting the audience over the head. Milwaukee Rep’s latest World Premiere play (performed in the Quadracci Powerhouse), Catherine Treischmann’s funny, poignant One House Over, is at its core the story of three immigrants in one Chicago backyard in 2010 during the height of the promise of the Obama era. The three are Milos (Mark Jacoby), a nonagenarian Czech man who came over to escape Hitler; Camila (Zoë Sophia Garcia), a young undocumented Mexican woman who wishes she could return to Guadalajara; and her husband Rafael (Justin Huen), who dreams of being an Italian chef though his own undocumented status prevents him from ever traveling to Italy. These people are brought together when Milos’s baby boomer daughter Joanne (Elaine Rivkin), exhausted from taking care of her cantankerous father while trying to make a living teaching violin, hires Camila as a live-in aide. A medical crisis brings Joanne to hire Rafael to help take care of her, and the multiple intersecting strands of the story are defined. Set in the backyard of a gorgeous Chicago bungalow (designed by Kevin Depinet), Treischmann’s play wisely does not add anything excessive to these pieces. She is clearly aware that with the immigrant characters, the divorced woman who has retreated from life, and a typically nosy neighbor (Jeanne Paulsen), she has all the ingredients she needs for both drama and comedy as long as the cast and director are up for the challenge. This cast, along with director Mark Clements, handles the layered dynamics brilliantly. There may not be any artificially huge conflict here, but the small, interpersonal ones (along with Camilla and Rafael’s constant concern about deportation) are more than enough to keep the audience engaged and make a 2:45 play seem much shorter. Joanne is so spiritually broken that she has to go out into her yard at night to smoke marijuana in order to feel anything at all. Rivkin plays her at first as a rather confused person, hiring an aide for her father without really even knowing what that entails (the lack of certainty perhaps reflecting her own uncertainty about putting off her dad’s care to someone else). As the play goes on, though, Rivkin allows us to see how truly empty Joanne is becoming. She is incapable even of getting to know her neighbor Patty on anything more than a superficial level. She has no clue how to interact with Camilla and little awareness that the Mexican woman is replacing her in the heart of her father. The only time she can release her own inner tensions enough to interact well with another human is in sharing some pot with Rafael, and even then she seriously misreads the level of intimacy with which he will be comfortable. Joanne is desperate for love but has forgotten how to go about finding it. Her deep sadness is her defining characteristic, but neither Rivkin nor Treischmann or Clements allows her to manifest this and become morose. She is existentially lost, needing someone to rescue her but incapable of seeing that equally lonely Patty might be the perfect one to do this.

The center of the play, though, is the three immigrants. Even at his most contentious, Jacoby instills Milos with so much humanity that we can actually like him when he does things like faking trauma in a deliberate attempt to get Camilla, to whom he has yet to warm, in trouble. Gradually, though, he does warm to her, and she to him as well. Treischmann puts an early kibosh on any thoughts of a May/December romance, which is a good thing; it would have been far too much of a cliché. Better is what happens as the two begin to care for each other as human beings and Camilla starts to see him as another lonely soul whose need for love and attention is not being satisfied. When the old man makes a pass at her, she shuts him down so gently that it’s clear she is beginning to care for him. There are more kinds of love, and Camilla begins to find a platonic one with her charge, especially as she recognizes more and more that his own daughter doesn’t feel it. Though Rafael came across to the US as a small child and thus has no immigration tale to tell, both Camilla and Milos share harrowing stories of getting here. Milos, who had a “golden ticket” out of Prague to America via Italy, found himself a victim of an entirely unnecessary gestapo beating at Innsbruck. Camilla counters this story with a tale of a terrifying journey crammed with forty other people into a refrigerated truck. Neither of these people takes what they have for granted even if Camilla harbors a desire to go back to Mexico to be with her father (who was deported after being hit by a drunk driver). One of her most poignant moments comes when she acknowledges that she will never have a baby in America because those in power might deport her and separate her from her (citizen) child. Treischmann never gets heavy-handed here; we care about Camilla and Rafael because they both are fully rounded characters. Both Garcia and Huen infuse their creations with very human shades of gray rather than any simple definitions. We understand their central concern about being deported even though they are in no real danger as far as we can tell. Instead of any deep darkness, then, we are left with a series of simply human interactions, real and far more powerful than any artificial conflicts might have given us.

As directed by Clements, the show moves along at a quick pace despite its unusual length. Ultimately we are given access to so many intimate moments and so much humor that the audience finds itself entrenched in the relationships and characters. All aspects of the production (starting with that set) are superb. Jesse Klug’s lighting is outstanding; Joe Cerqua’s original music sets the tone for everything we see; Rachel Laritz’s costumes are wonderful. (The robes Joanne wears into the yard for her midnight marijuana adventures are beautiful, as is the suit that Milos wears to his 90th birthday party.) It’s all strong work.

One House Over wants us to wonder about ourselves as people and as neighbors, both at the micro and macrocosmic levels. It examines how we fulfill our obligations to each other as well as examining the obligations a country has to its people, and it does so with great humor. That single small backyard contains all of the laughter, dreams and pain of five people who are, it is clear, not at all that unusual. There is nothing great or heroic here. There is no intense love story. There is nothing even hinting at thrills. What there is, though, is a small slice of life we can all recognize even if we have never lived it, and in that empathy perhaps we might forge a better life for ourselves.

One House Over’s run is finished. Find more information about current plays on our Current Shows page and at theatreinchicago.com.