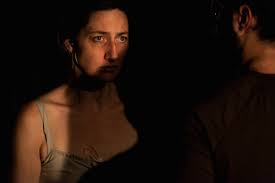 This review has been updated to include a paragraph about lighting and music.

Entering the new Theatre Y and Red Tape Theatre space at The Ready for their stunning production of Federico García Lorca's seldom-performed "tragical poem" Yerma is like being transported into another world. Chairs for the audience encircle the black box theatre, its floor strewn with mulch. Low, quiet night sounds, including the soft chirping of crickets, can be heard in the distance. And everywhere are actors, already present in tableau: men seated, shirtless, behind the audience, and women standing, wearing only bedraggled, filthy shifts and each carrying a chair, in the center. Among the women is one single empty chair: the chair that belongs to the play's central character, Yerma.

We are somewhere in rural Spain in the era before Franco in a small town with very specific beliefs, we will come to discover, about the relationships between men and women and about the role of fertility in a woman's life. Throughout this stylized, expressionistic play, directed by Jeff Award-winner Max Truax from a new translation by company member Héctor Alvarez, the audience is immersed in the life of this town and the life of the protagonist in ways that are not always comfortable but are always powerful.

Yerma is Spanish for "barren," and that is the issue that the title character (played with blistering intensity by Katie Stimpson) has to face in a village that places a premium on its women bearing sons. Yet it becomes clear through the play that the real fault lies with her husband Juan (Cody W. Beyer, a focused and steady force for much of the play amid a mass of loud, chaotic movement and chanting). Juan is simply not interested in children; he wants nothing more than to work his farm and tend his flocks and know his wife honors him. That, to him, is the epitome of manhood. Somehow he fails to see that it is slowly tearing Yerma apart.

She even allows her eyes (though nothing else) to fall upon a handsome shepherd, Victor (winningly played by Brendan J. Mulhern). They have long talks, eliciting the gossip of the neighborhood, and although they are completely innocent of any real wrong, Juan becomes increasingly upset with Yerma whenever Victor happens to be around, even going so far as to bring in his male relatives to watch over her. (In Lorca's original these are his sisters; the gender change underscores the notion that women cannot be trusted.)

As Yerma fights against her "barren" status, she tries more and more desperate measures, including pagan fertility ceremonies and rituals. At one such

ceremony, she is offered the chance by an Old Woman (Barbara Button) who has been watching her all along (and literally carrying the weight of her life—her chair—on her back as she does so) to leave her husband and come into her family, where a much more fertile and child-oriented man would await her, but Yerma is not disloyal; she is as conscious of propriety as anyone else, no matter how frustrated she might be.

Throughout the play, Truax's fierce and passionate staging allows the audience to see and experience the emotional interplay of the townspeople. The stark difference between the dirt-covered, shirtless men, almost always moving explosively, violently, and in unison—dangerous, sensual gods—and the much gentler women in their barely-there dresses, moving independently and smoothly across the stage, is constantly right in front of us. And the difference, too, between Juan and the rest of the men is also right there before our eyes: alone among them, he moves slowly and and quietly, wearing a neat, clean shirt and bearing a closely trimmed beard, signs of someone who cares more about himself and appearance than about anything else. This powerful contrast with Yerma's more-desperate-by-the-minute psychological need for a son has to come to a climax, and Truax stages Lorca's final, tragic act as much as a sexual one as a violent one.

The acting is uniformly strong here, but the night belongs to Stimpson. Wan and thin in a shift that is, at first, far cleaner than any of the others, her character's needs are written all over her face. And Yerma's contradictions—the love/hate relationship with Juan, the need for Victor but the understanding that she can never go there, etc.—seem probably as much a cause of her anguish as her barrenness. The one moment when she allows her sexual nature to come out is as powerful as it is brief; that is it cut off so curtly says everything about her misery, and as Stimpson sinks to the floor in pain her loss of hope is palpable. It is a wonderful performance.

And it is helped by some of the most effective lighting design and original music that Truax could wish for. Jeff Award-winning composer Nicholas Tonozzi here has enveloped the proceedings in music that captures the blend of emotional experiences that the director is putting onstage, punctuated by songs for Stimpson that are plaintive and soul-searching. Taylor Ovca's unusual lighting design also pushes mood above everything else, with its single low-hung lights and shadowy effects.

This play is probably not for everyone. For one thing, the unusual expressionistic nature of the staging might put some people off. And Lorca himself is not in everyone's tastes. But for those who can appreciate it, Theatre Y and Max Truax have staged something unforgettable here. And they have christened their new space in a powerful and uncompromising way that offers much hope for the future.

Yerma is now playing at The Ready (presented by Theatre Y and Red Tape Theatre), 4546 N. Western, until December 6. Tickets are available from Theatre Y. Find more information about current plays on our Current Shows page and at theatreinchicago.com.