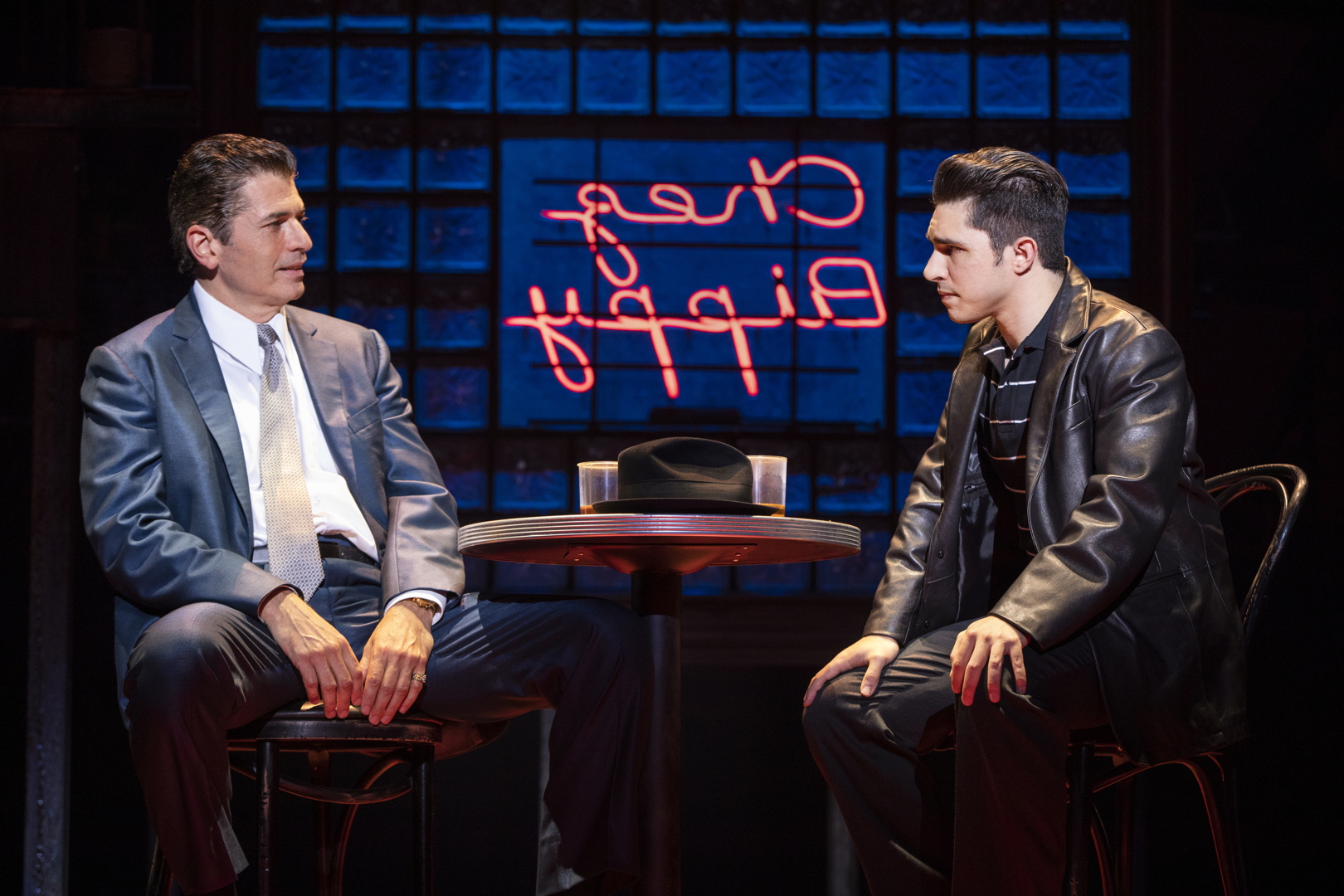 There are probably some movies less likely to be made into a musical than A Bronx Tale. (Heathers comes to mind, but that one is a musical as well.) Still, Chazz Palminteri’s one-man show turned Hollywood movie turned musical is unusually violent for all of the singing and dancing, featuring murders (with the loudest “gunshots” you’ll ever want to hear) and an explosion and multiple deaths, some of which occur onstage. So why then does it work so well? As one of the songs says, it has “heart,” a sincere character named Calogero (it’s Sicilian, he explains) who grows up in the heart of crime family country in (of course) the Bronx. Calogero (called “C” and played by Joey Barreiro as an adult and Frankie Leoni as a nine-year-old) becomes (much to his bus driver father’s chagrin) a kind of protected ward of the local mobster Sonny (Joe Barbara) after refusing to “snitch” on him following a murder he witnessed.

Sonny is a ruthless crime boss but he has a sincere soft spot for the boy, taking him under his wings and teaching him what he can while acknowledging that C has to make his own choice in life between using love or fear to bond himself to others. Sonny, obviously, uses fear to keep his gang, consisting of people with names like Frankie Coffeecake and Jojo the Whale, in line. (He says he follows the guidelines set down by “Nicki Machiavelli.”) It’s the choice he has made, but whether it is the choice C makes is up for grabs. C worships Sonny, but he is at heart more like his father, who tells him that Sonny’s harsh world is not what he wants for his son. At seventeen, though, C only sees the pride and success of being part of Sonny’s crew.

At least, until he meets Jane. In a riff out of Romeo and Juliet (or, probably more appropriately, West Side Story) C falls for a girl who causes rifts between him and his racist friends and his father Lorenzo (Richard H. Blake). Jane (Brianna-Marie Bell) is Black, a girl from several blocks and another universe away, but the two meet at school and find themselves deeply attracted to each other. (They share a song, “Out of Your Head,” in which they question their own sanity in their feelings.) For his part, Sonny advises his young friend to go for it, telling her that he can’t afford to miss out on a potential love just because she is not of his race. It’s wonderful and real advice; Sonny is not any kind of stereotypical mobster (if you couldn’t figure that out when he started quoting philosophy.) He understands that the life choice C will/must make will not mirror his own. C is far more a lover than a fighter.

The songs here, by Alan Menken and Glenn Slater, are for the most part designed to keep the plot moving. Some of them, though, are quite memorable, including Lorenzo’s “Look to Your Heart” and Sonny’s “One of the Great Ones,” which I found myself humming on the way out of the theatre. Directors Robert DeNiro (yes, that one) and Jerry Zaks manage to blend the grittiness with the bouncy music (and Sergio Trujillo’s choreography) in such a way that the violence seems earned and not gratuitous. Beowulf Boritt’s set design makes liberal use of scrim and works brilliantly. In fact, all of the design team here—especially Howell Binkley, Gareth Owen, and William Ivey Long—has done a remarkable job of transferring this show from Broadway to the road, where it fits nicely on the Nederlander Theatre stage.

But ultimately the show wouldn’t work as well as it does without the right cast. Barreiro, Barbara and Blake create a very believable central triangle of characters, as father and mentor seemingly fight for C’s soul. Blake is very sympathetic as Lorenzo, who only wants his son to succeed in life and not try to cut corners the way the mobsters do. Barreiro is a strong main character; we want things to work out for C because the actor is such a contrast with the other denizens of Sonny’s life. And Sonny himself, a bit of an enigma, is perfectly portrayed by Barbara. The character may be a bad guy, but he’s not a “bad” bad guy. And Palminteri’s story does not allow for easy judgment, either: after all, it’s Sonny, not Lorenzo, who understands the need for C to romance Jane. Bell is all teenage exuberance as Jane, meeting a potential boyfriend, talking about him to her friends, and dancing joyfully about it all. (Barreiro is more stoic, but then C is narrating a story that takes place in his past, so he knows where it is heading.)

A Bronx Tale is violent, yes. But it is also a musical with a heart. It never hits any wrong notes for the world it is set in, but it wants to show us that such worlds can indeed be escaped if you really want to. Maybe it takes a special kind of person to do so, but Lorenzo makes it clear from the start that his son is that kind of person. After that, it’s all about the choices we make.

A Bronx Tale is now playing at the Nederlander Theatre, 24 W Randolph St, until Mar 24. Check the website for specific dates, times, and tickets. Find more information about current plays in our front page recs and attheatreinchicago.com.