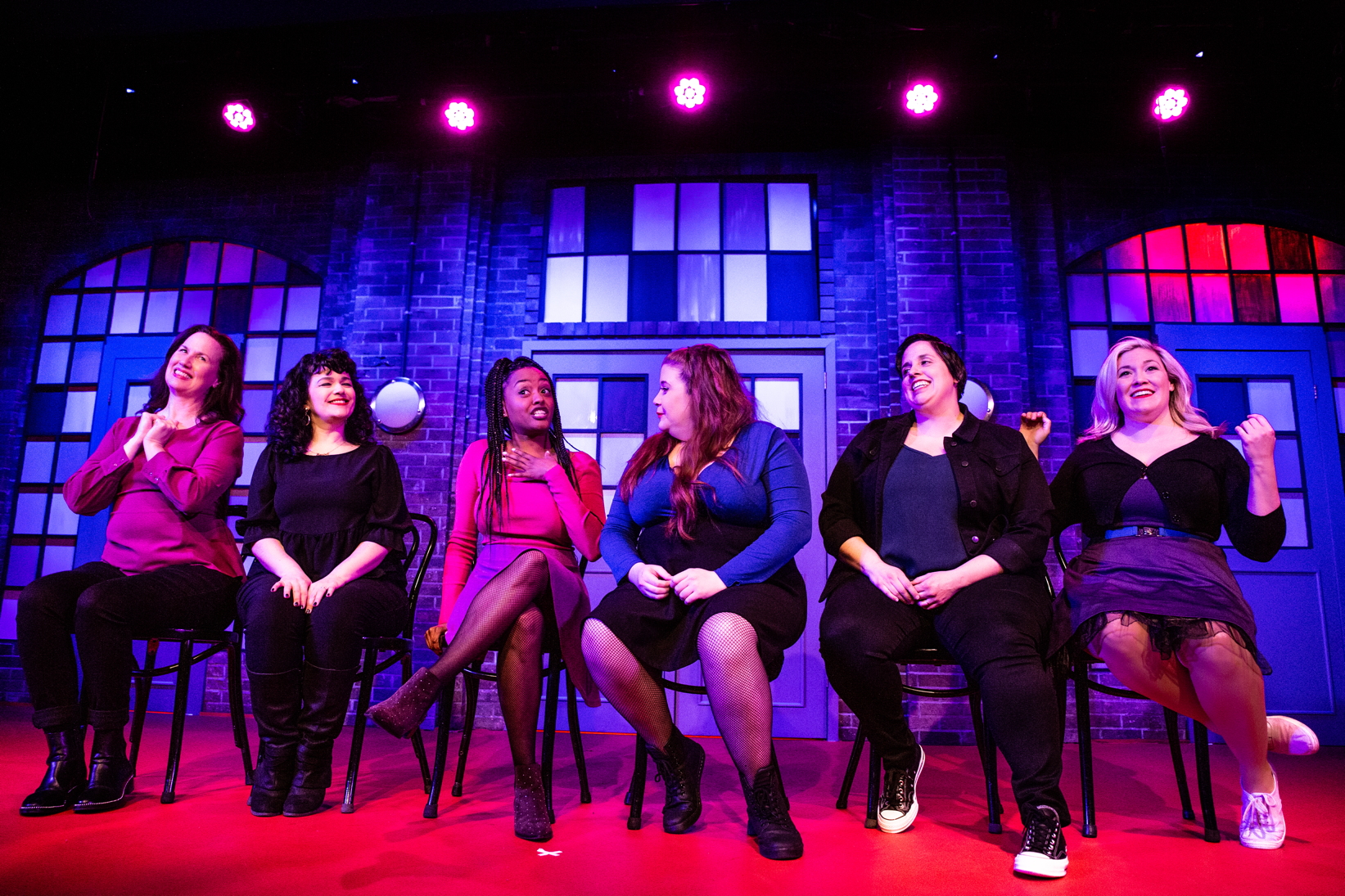 Six women stand triumphantly on the stage of the UP Comedy Club.

“Are you ready to change the world?” one asks the crowd, receiving an enthusiastic response. And that is precisely what is happening in Second City’s hilarious, amazing She the People: The Resistance Continues. Half of the cast and half of the show has been updated in this revision of the comedy improv masterpiece, and it is every bit as fresh and uproarious as anything the famed comedy troupe has put onstage.

Mary Catherine Curran, Sayjal Joshi, and Kaye Winks have joined original show members Carisa Barreca, Alex Bellisle, and Katie Caussin for two hours of sketch comedy leaning deeply into what director and head writer Carly Heffernan says is a show that “satirize(s) the woes of being a woman in this wild world while empowering the audience to take a stand and make real change.” (And it really does that: there is actually a bit in which the audience participates in a phone call to Illinois’ woman senator Tammy Duckworth, imploring her to work on a worthy cause. The night I went it was trans rights, and the audience chanted “Trans rights are human rights” for the senator to hear.)

Most of the show, of course, presents its feminist leanings (one sketch actually tackles the common misinterpretation of that word) in short, funny sketches in the well-known Second City formula. Joshi plays a woman Presidential candidate who is constantly getting advice from her handlers to smile more, but not too much; to be less “shrill”; to act “young but not too young” or to “relax, but not like Weekend at Bernie’s.” All six actors play accomplished professional women acting like ditzes at a male strip club (while speaking about all sorts of matters in highly elevated language) and coarsely cheering on the performers. (“When women act like this,” one of them says, “it’s a bachelorette party; when men do, it’s Congress.”) There is a song about the uterus. (“If I wanted the government up in here, I’d f*** a Congressman.”) And there is a bit about the most important part of a woman’s anatomy (the brain, duh!)

The show is full of sketches about privilege, body positivity, the ridiculous roles women play in commercials (just think Cialis), being a young mother (“maybe your baby is gay!”) and turning into your own mother. It also covers ground like immigration, the tendency to say “I’m sorry” way too much, and even Beyoncé.  One of the best bits of the night has Barreca, at a birthday party, so wasted that she won’t stop dancing no matter what kind of music the DJ plays. (Barreca is a heck of a dancer.) Another standout has Curran attempting to do a “Six Degrees of Kevin Bacon”-like connection between an audience-selected celebrity and historical events. (On the night I was there, she succeeded in proving that Rami Malek was responsible for JFK’s assassination.)

This is a raucous, crude, pointedly political, outrageously gut-busting show, and this cast is clearly having a heck of a time delivering it. And with so much new material they are ready for people to come for a second or third time. The chances are that, even if you’ve seen it before, you’ll lose yourself in laughter this time around. And in an era in which women are still struggling to be viewed as equals while the government continues to actively seek to control them, laughter is about as important as it ever has been.

She’s the People: The Resistance Continuesis now playing at the UP Comedy Club, Piper’s Alley, in an open-ended engagement. Check the website for specific dates, times, and tickets. Find more information about current plays in our front page recs and attheatreinchicago.com.