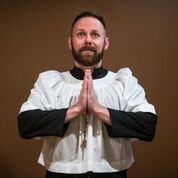 Probably the most difficult thing to do on stage is a one-man (or woman) show. In any normal play, you have other people to play off of or times when you are out of the focus or off stage entirely; you are not the sole source of energy. In a one-person show, everything is on you; you put yourself in the spotlight and the entire show literally lives or dies on your performance. And it gets a lot more intense when you wrote the show too: now it isn’t merely your performance that is out there, but your words. And then there is a triple whammy: what if the play you wrote and are performing solo is about your life? So you have to give all sorts of respect to a performer like Garrett Allain, whose Altered Boy is now playing at the Pride Arts Center’s Buena Theatre: this young man only five years out of Louisiana’s community theatre scene is putting every bit of himself onto the stage for his audiences. And some of it works brilliantly. However, overall the evening lacks cohesion and consistency, two critical components of any production but especially important in an evening of storytelling.

Actually this is not just an evening of storytelling. Allain calls it “storytelling, song, dance, and video,” and each one of these components features significantly during the hour-long show. In fact, Allain begins with a song about his own lack of self-confidence (an odd topic for a guy doing a one-man show on his first time out) and his desperate need to be “liked” on Facebook or “woofed” on Scruff. And by the end of the song he has opened up to his audience far more than any similar-length monologue might have done. Alas, it is also at the end of the song when he goes into the medley of scenes that comprise the “Childhood” section of his show and we start to see that there will be little rhyme or reason for what follows what. (The show consists of three more parts: “Church,” “Cherch or Faggotry,” and “Gams.” These titles alone might indicate the randomness with which subject matter is explored here.) Among the topics covered: professional wrestling (in a too-long sequence in which Allain, as a child version of himself, “challenges” pro wrestlers using gay puns), acting (his first official role was in second grade as Bird #2), cajun food, his nervousness reading an essay aloud in third grade, his mother (whom third grade Allain tells us warned him about certain words that are “a type of stereo”), being gay (including coming out to his conservative Louisiana family), wanting to become a priest, growing up in the south (apparently some types of stereos are true?), Christian day camp (in a series of high-energy, rap-inspired pieces that would have worked better had the raps been better parodies), and, oh yes, being an altar boy. You’d think that a play called Altered Boy would spend a whole lot more time lampooning the time he spent being an altar boy, but the truth is that Allain hardly touches it. He puts on a surplice a few times and kneels at an altar and he talks about a priest he got to know, but there is almost nothing at all about being an altar boy or for that matter about how his time doing that “altered” him. And it is this lack of focus that ultimately hurts his show. For all of the individual bits that do work well—”Gams” is a small masterpiece—there is just too much where the pacing is slow or the moment just doesn’t come together. One especially choppy bit has him interacting with a video version of himself: the timing is tricky, and he didn’t make it work on opening night. (Perhaps this will get better as the show moves on.)

This is where his director, Jeff Bouthiette, needs to step up. He has the play blocked well, but he also needs to help Allain to tighten it where it needs tightening and perhaps to reorganize it a bit to make the storytelling flow better. Allain is a very likable and enthusiastic performer who is clearly willing to do anything at all; he needs a firmer hand at the helm.