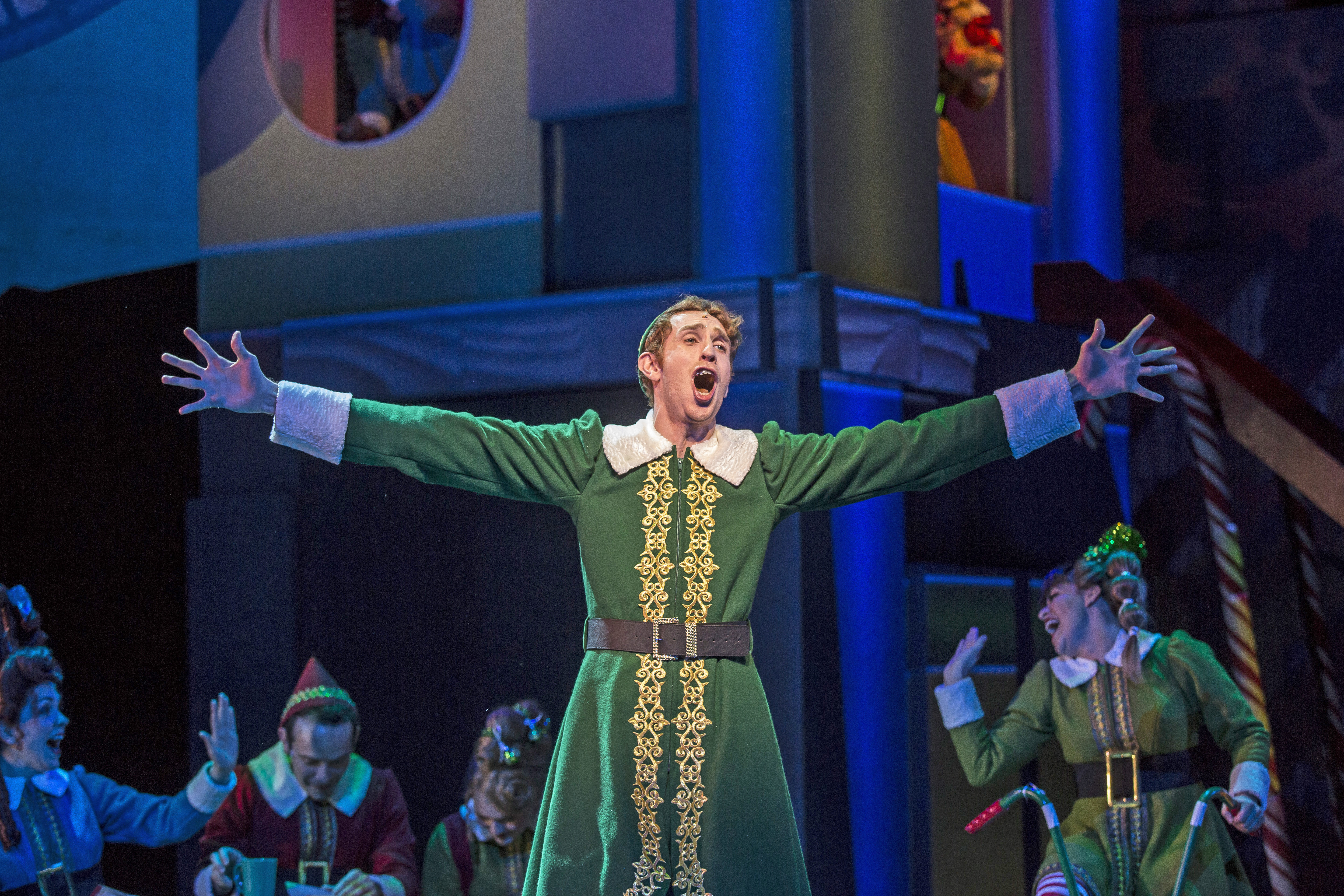 The magic onstage at the Paramount Theatre’s Broadway-quality production of Elf the Musical doesn’t even wait for the show to begin. Parents with young children will surely appreciate the projected elves that pop up in almost all of the set’s “windows,” drinking hot chocolate, winking, or waving at the audience. Watching for them is surely a game that will entertain early-arriving young ones. But it’s when the lights go down that the real magic begins; I’d call it Christmas magic if it didn’t sound so cheesy, but why not? This is a sparkling, shining show that pulls its audience away from whatever baggage they walked in with and, by the end of its very first number, “Christmastown,” immerses you in the spirit of Christmas. Director Amber Mak, who staged last season’s multi-award-winning Disney’s The Little Mermaid, has a show this time that will leave its entire audience believing in Santa Claus. With infectious songs by Tony Award nominees Matthew Sklar and Chad Beguelin (who composed Disney’s Aladdin on Broadway) and a book by Tony Award winners Thomas Meehan (Annie, The Producers, Hairspray) and Bob Martin (The Drowsy Chaperone), this show is sheer entertainment from start to finish. The show opens with Santa Claus (Roger Mueller) deciding to tell us a Christmas story and settling on the tale of Buddy the Elf, familiar to most of the audience from the 2003 film upon which this musical is based. Buddy, of course, is no ordinary elf. Played by the hyper-talented 6’4″ Kyle Adams, he towers over all of the other elves in Christmastown, and there is a reason for that, as Santa explains to him: he’s human. This devastating news shatters his entire sense of self, but begins an adventure that quickly finds him in New York City searching for Walter Hobbs (Michael Accardo), whom Santa has identified as his true father.

Familiar bits from the film are here as well, and like the film the musical makes a lot of hay from Buddy’s complete naïveté. (“Congratulations! You did it! You’re the best in the world!” Buddy says after seeing a sign on a hot dog cart proclaiming exactly that.) There are plenty of new bits, too, including a whirlwind introduction to NYC in Times Square that leaves even the loquacious Buddy speechless. But through it all, the central characteristics of the overgrown elf remain true: he is always smiling and spreading Christmas cheer. Of course, a giant elf in New York City does attract attention, but the sheer force of Buddy’s happy personality (with a little North Pole magic thrown in) always gets him out of trouble. And where else would a huge elf end up other than Macy’s Christmas Department? When Buddy discovers that everyone there is grumpy and worried about getting home late instead of enjoying the fact that they get to set up a mini-Christmastown, he is stunned. Of course, he turns that around in one of the show’s best production numbers, “Sparklejollytwinklejingley.” By the time everyone leaves—laughing and happy—Macy’s looks like Christmas.

And it is not merely a few decorations, no matter how elaborate, that does it. No, Jeffrey D. Kmiec’s entire set transforms itself, as it does throughout the show over and over again, thanks to a brilliant lighting design by Greg Hofmann and an imaginative use of projections by Joseph A. Burke. Burke’s projections, especially, turn the gray walls of the set’s castle-like edifices into Christmastown, Times Square and other locations in New York including Rockefeller Center and a lot of different views of variously lit buildings. (The transformation from Christmastown into Times Square all by itself is worth the price of admission; it’s just great.) Meanwhile, Kmiec’s set contains drops and roll-ins that instantly transform it into interior spaces or Central Park or whatever is needed, and the lighting is spectacular. The result? From the very beginning, no matter what is happening, the set seems to be an extra character in the proceedings; it seems alive with an energy of its own, pulsing with light and color, changing moods instantly if appropriate, reflecting everything that is happening like Aladdin’s Genie, and the effect is just as magical.

The acting, singing and dancing are uniformly wonderful throughout as well. Adams brings such a perfect innocence to his role that, despite his towering height, he often seems the youngest one onstage (no mean feat in a cast that includes several children). Accardo is the perfect grumpy, overworked dad, under pressure from an overbearing boss to turn in a new Christmas book idea and too myopic to realize he has one right under his nose. Lara Filip and Oliver Boomer are engaging as Buddy’s stepmother and half-brother, respectively, and the scene in which they write a letter to Santa together at Buddy’s behest is lovely and poignant, though it starts out humorously. (“You’re asking your 12-year-old son how to write a letter to Santa? What does that say about this family?”) As they set to writing, though, they find that there is only a single thing they both desire: “Make (Walter) part of our lives / Not just passing through / If you can do that, Santa / I’ll believe in you.” The whole cast sparkles, but special mention has to go to Emily Agy, who stepped in for a pregnant Rashada Dawan, who plays the feisty office manager Deb at Walter’s place of business, on opening night, and Jonathan Butler-Duplessis, whose lovably surly Macy’s manager is a highlight reel to himself.

Of course, there has to be a love interest, and she comes in the form of Jovie, a gruff Macy’s elf played by Samantha Pauly. At first Jovie wants nothing to do with Buddy and his “elfishness,” but he manages to grow on her. He takes her on a date that includes ice skating at Rockefeller Center. (Yes, there was ice skating on stage) and gets the completely closed-off young woman who refuses ever to sing to join him in a Christmas Song. “Just sing a Christmas song / It’s like magic if things go wrong / Just spread some Christmas cheer / By singing loud for all to hear.” She is so blown away by what she has discovered in herself through him that she finds herself falling for him, which leads to the wonderful “Never Fall in Love (With an Elf)”: “A row of self-help books / Line my bedroom shelf / Well there’s one rule those books forgot / You never fall in love with an elf.”

There is so much more magic in this play that I can’t possibly mention it all, and I wouldn’t wish to spoil it anyway. And I know I’ve used that word a lot, but what other word describes a play in which there are Broadway quick-changes and ice skating on stage? And the set is a character? If you know a better one, let me know. Maybe “sparklejollytwinklejingley.” That just might do.

Elf the Musical is now playing at Paramount Theatre, 8 E. Galena Blvd, Aurora, until January 7. Performance dates and times vary; check website. Tickets are $38-74 and are available from Paramount Theatre. Half-price tickets are available. Find more information about current plays on our Current Shows page and at theatreinchicago.com.

One thought on “Paramount’s “Elf” Is Simply Sparklejollytwinklejingley”