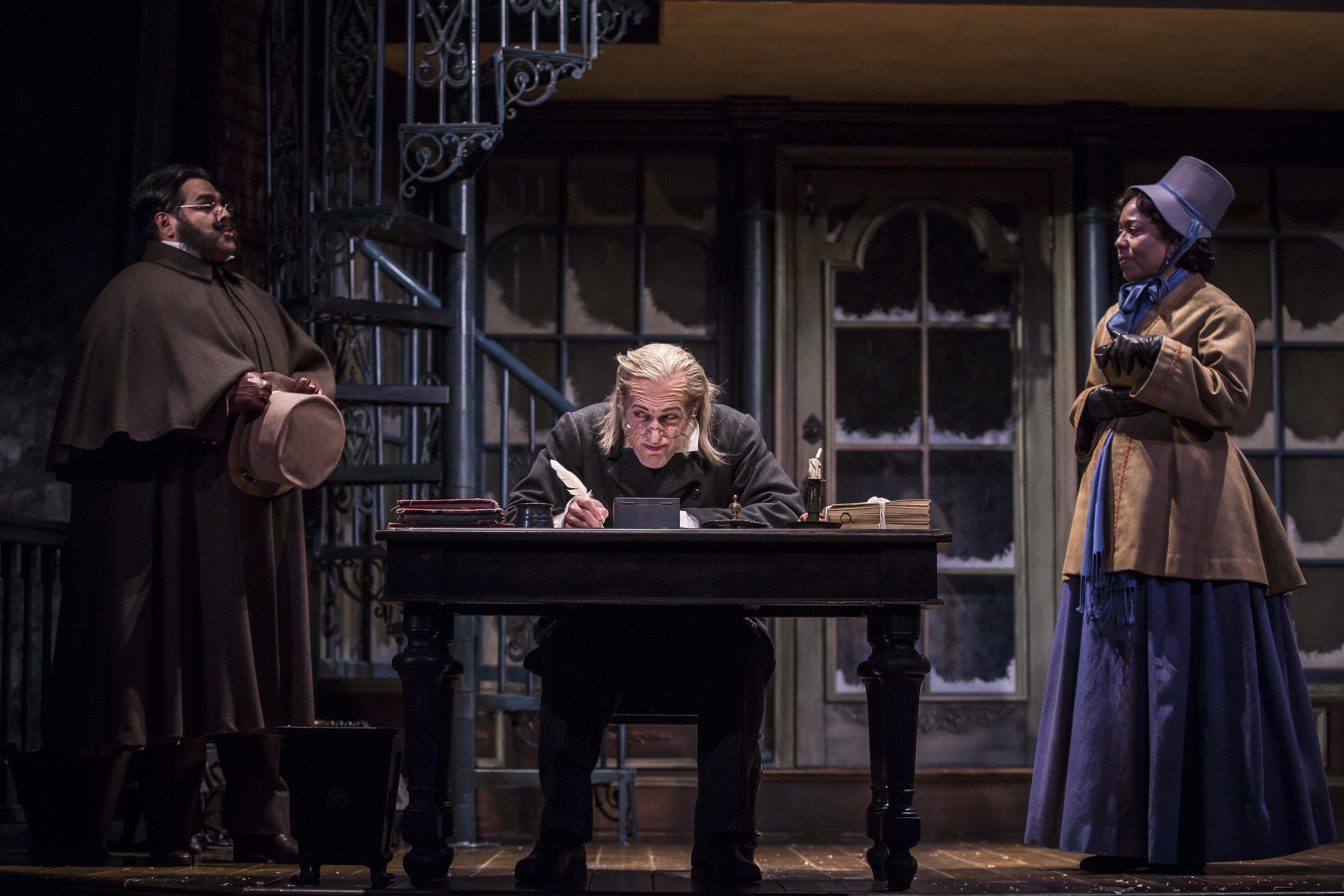 Over a million and a half patrons have seen the Goodman Theatre’s annual production of A Christmas Carol since it first opened forty years ago. For many, it was their first experience with live theatre, and there could hardly be a better one. For all of those years right through to today, the Goodman’s Carol remains the gold standard of Christmas shows: a brilliant telling of the perfect seasonal tale. There are a few surprises in store for the fortieth anniversary. After last year’s cross-gender casting of a “niece” for Scrooge (Frida, played by Ali Burch this year and still somehow referred to as “Fred” by her husband Abe (J. Solomé Martinez) despite the fact that the spelling of her name renders this illogical), a lot of media attention has gone to the casting of the first girl (Paris Strickland) as Tiny Tim. She carries off the part quite well, making an utterly adorable urchin, and her unassisted walk across the stage, for which director Henry Wishcamper gives her all the time in the world, is powerful and poignant. (Burch’s reunion with her uncle somehow has more power in a cross-gender casting as well. The Goodman may be on to something here.) But the truly wonderful innovation of this evening is the new Ghost of Christmas Past. In Molly Brennan, they have found a brilliant performer for the role, and she brings joy and fun to the flying that has long been a trademark of the part. Brennan’s aerial acrobatics give the Ghost a new and more exciting personality, especially during the introduction scene, which is enhanced by some great lighting effects by Keith Parham (whose lighting throughout the show is fantastic) and takes full advantage of Richard Woodbury’s sound design for enhanced vocal effects. Her costume, too, which I think is also new this year, is a wonderful pink and black affair that screams Punk Fairy; Heidi Sue McMath must have had a grand time designing it.

Other than these significant alterations, this version of the Goodman’s show is as it has been for several years now, since the last major set and script revision, which is to say it is outstanding. From the moment when Kareem Bandealy steps onto the stage as the Narrator and utters Charles Dickens’ famous opening lines, “Marley was dead, to begin with. There is no doubt whatever about that” (and Bandealy finds glorious new ways to uncover the humor in Dickens’ lines each season), this show is uniform in its smart pace, beautiful staging, stunning visuals, and sparkling performances. Those who have never seen it will be amazed by Todd Rosenthal’s set design, which includes a two-level counting house for Scrooge, a decaying and out of proportion manor for Scrooge’s home, a simple cottage for the Cratchits, and several other locations. Those who have seen it will enjoy revisiting these exciting sets, which still can manage to surprise. Take the arrival of Marley’s Ghost, for example. Everyone in the house knows it’s coming, yet half of the audience still jumps from their seats when we get our first sight of him. And Joe Foust’s Jacob Marley has only gained more depth over his six seasons in the role. When he speaks of understanding too late that mankind should have been his business, there is honest pain in his voice for what might have been. Foust and Wishcamper understand that the role of this ghost is to be terrifying but also to be instructive, and Foust accomplishes both. Lisa Gaye Dixon is in her third season as the Ghost of Christmas Present, and she has really made this part her own. Far from the jolly Father Christmas of some previous incarnations, her version has an edge almost from the very beginning, and she is more than willing to put Scrooge in his place or throw his own words back in his face. (About Tiny Tim: “If he be like to die, he’d better do it and decrease the surplus population.”) Dixon’s Ghost doesn’t hold back when Scrooge needs to be yelled at, and he needs that a lot. Newcomer Breon Arzell, who also plays a bright and enthusiastic Dick Wilkins, plays the Ghost of Christmas Yet to Come. Those two roles could hardly be more different: Wilkins spends his scene readying for a party and trying to convince his dour friend Ebenezer to stop working on Christmas Eve and join in the festivities at the Fezziwigs, played by Jonah D. Winston in his second season and Penelope Walker in her thirteenth. Walker especially has a wonderful time trying to help drag Scrooge out of his doldrums, but he doesn’t quite get there until he meets future love interest Belle, played by Sadieh Rifai, whose exit scene is as heartbreaking as her entrance was heartwarming. In his other role, the Ghost, Arzell is ten feet tall and clothed in Death’s shroud as he sullenly and theatrically points to the dark future Scrooge has built for himself. Arzell clearly has a good time with both roles.

The Cratchits, who have come to be seen as central figures of A Christmas Carol because of Tiny Tim, are played this year by Ron E. Rains and Michele Vasquez. Rains, now in his eleventh year as Cratchit, is an old hand at this. He can find more wonderful physical humor to play out in Scrooge’s counting house than seems possible, then turn in a moving, touching moment at Tim’s future “death.” Vasquez is new this year, and something about the pairing re-energizes the whole Cratchit family (which of course consists of child actors from Chicagoland, most of whom, like Strickland, are also new this year). Of course, when it all comes down to it, no matter how wonderful the tech is (and it is), no matter how solid the rest of the cast is (and they are), no matter how great the live music onstage is (and it is), A Christmas Carol comes down to Scrooge. Larry Yando is in his tenth season playing the character, and he seems to find new ways to have fun with it each time around. (He really takes advantage of all the new flying bits.) Any actor playing this role has several tasks. At the start of the play, he needs to be funny without losing any sense of being a mean, nasty soul. Yando has found so many little glances, pauses, variations on line readings, etc. to accomplish this a hundred times over. A great bit comes as he is heading home and he ends up in one of those moments when someone is in front of you and you try to go around each other but you go in the same direction…several times. A withering look from Scrooge and the other man steps aside.

The other key task for Yando here is to make Scrooge’s transition work, and over the years he has learned lots of ways to enhance that. Some come during the various ghost visits, as the lessons sink in. But the main ones arrive on Christmas morning, and this year Yando seems more giddy and jovial than ever as Scrooge discovers that “the spirits have done it all in one night” and takes advantage of his new insight.

It really shouldn’t matter whether this is the first or fifteenth time you’ve seen Goodman’s version of this show. On opening night, there was a large contingent who clearly were there for the first time, from their reactions, and they were loving it. Me? It was about my eighth time, and I loved it too. There is simply nothing not to love about it. A Christmas Carol is the Christmas classic in Chicagoland. If you love Christmas, it’s the go-to show of the year.