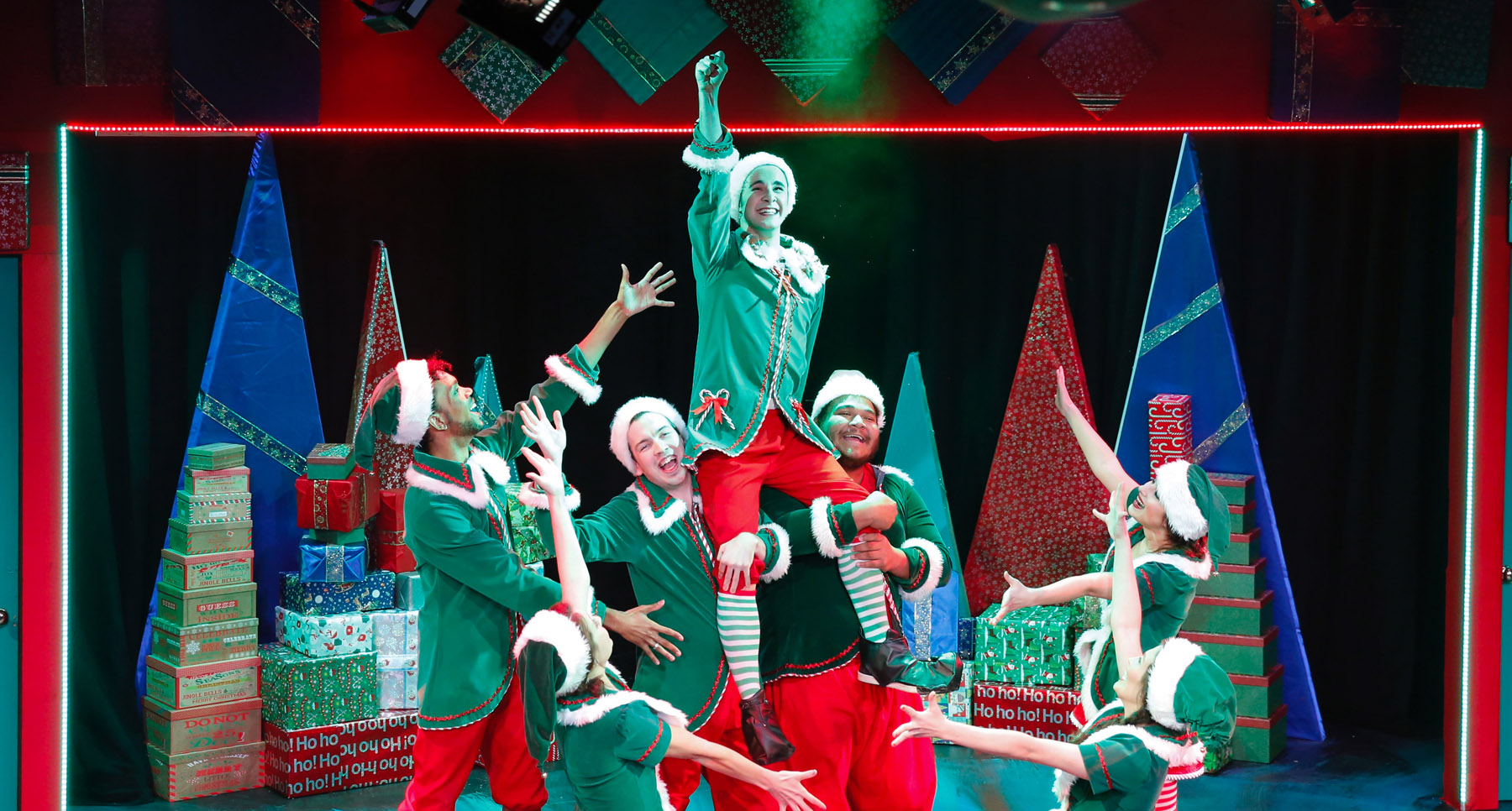 If your Christmas has been over-Caroled and your Nuts have all been Cracked and you’re just searching for something totally different from your holiday entertainment, you’ll find it at the Greenhouse Theatre Center, where Other Theatre has returned with its third incarnation of the gay camp Christmas musical Barney the Elf that, if one can judge from the reaction of the opening night crowd, is all set to rock the house with laughter. This show, which can also be sweet and touching in its most tender moments, is so full of high camp and low comedy that, whenever the audience isn’t “aww-ing,” it’s guffawing. The story, peppered with a multitude of parodied pop hits and songs from musicals, involves a sad time at the North Pole just after the passing of Kris Kringle. His son, Santa, Jr., has taken over, and it turns out that the young man is all bottom line and hates the Christmas spirit, ordering the elves to stop singing, eliminating the endless hot cocoa fountain and the roasting of chestnuts (“that’s a fire hazard; it’s literally an open fire!”), and basically making everyone’s lives more miserable than Scrooge on his worst day. But a miserable Bob Cratchit wouldn’t cause a breakdown of Christmas itself, and here the elves start falling so far behind in their misery that it is severely threatened.

Enter the elf named Barney, a walking Christmas Cheer Factory who utterly ignores the new boss’s dictums and brings joy back to the toy factory…until a chance discovery helps him to realize that he is gay. Turns out Junior is also a homophobe, so Barney is banished, and that’s really where things start getting interesting as he finds himself in Chicago working in a drag club where he gets to know the local headliner, a drag queen named Zooey and, in his innocent nature, falls in love with the man behind the queen. All of this is presented as a story read to us by Mrs. Claus (Maggie Cain), who wise-cracks her way through a role that allows her to cast easy negative judgments on her son as she declares her affinity for Barney. (Her rendition of Cee Lo Green’s “Fuck You” is one of the evening’s highlights.) To be fair, Santa, Jr. is so easy to hate that he even gets the Satanic light treatment a couple of times from designer Matthew Carney and it seems all he can do not to be snarling and braying “Bwa-ha-ha!” But Jaren Bellar puts so much wonderful energy into the role that Junior also manages to become one of the most fully realized characters on the stage and has some of the play’s best bits.

Barney himself is played by Roy Samra, who presents himself as an utterly adorable bundle of (sometimes nervous) energy. The scene in which he discovers he is gay after seeing a beefcake UPS guy is hilarious, as he sings “Boner” (about the problem of having an “unmasturbated boner”) to Wicked‘s “Loathing” while the ensemble showers him with tissues. He also has wonderfully sweet moments with Mrs. Claus, animated dances with the ensemble to give them their spirit back, one glorious solo of a Christmas carol that rings out clear and beautiful, and all sorts of lovely moments once he meets Dixie Lynn Cartwright’s Zooey. At first, Zooey is very wary of the newcomer in the elf suit who tends to scream when he sees her, but when she realizes he is an outcast too she finds common ground and befriends him. Cartwright (a drag creation of Drew Nixon, who lives somewhere under all of that makeup) is a talented performer and knows how to milk a drag stage and audience for all they are worth. Although from her first appearance the show is jarringly moved in a new direction, it somehow ends up feeling like a natural continuation of Barney’s self-discovery, and Cartwright has both tender and comic acting chops that she utilizes brilliantly.

These fine performers are surrounded on stage by an ensemble consisting of Courtney Dane Mize, Colleen Derosa, LiSean McElrath, Cody Talkie, Emilie Rose Danno, and Miranda Harris, all of whom have, individually and collectively, some excellent moments throughout the play. Director/choreographer Tommy Rivera-Vega puts them through their paces and keeps the play moving at a solid clip while creating some dynamite visuals. And overall, whether large or small, no detail is missed, whether is it Olivia Crary’s wonderful elf costumes or the simple fact that, when Junior “jacks up” the damaged sleigh, Sound Designer Ashley Pettit provides the tiniest sound of the jack working.

Other Theatre has created a truly enjoyable alternative holiday entertainment here. It isn’t for everyone. For one thing, it probably isn’t for conservatives or haters. But most others will find a truly safe space at the Greenhouse as long as Barney the Elf is in charge.