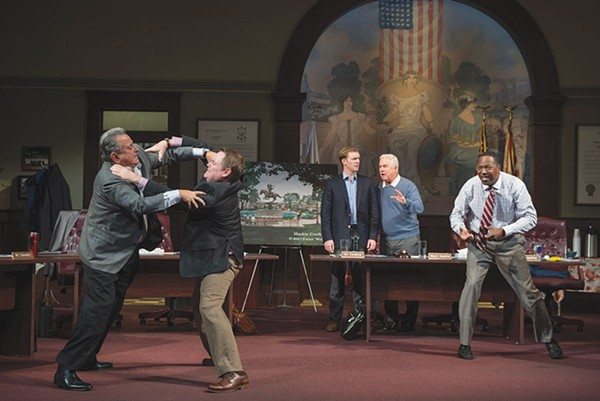 Early in Steppenwolf Theatre’s latest play, The Minutes by Tracy Letts, the newest member of the town council of Big Cherry is called upon to start the week’s meeting with an invocation. At first a bit taken aback—separation of church and state, anyone?—he obliges, muddling through a lengthy epistle to the Lord in praise of the rain. That might not be too notable except for the fact that it has already been made abundantly clear that Big Cherry has had more than enough rain lately, as it has been pouring for two straight weeks and they are currently in a dire thunderstorm that threatens the town’s already weak electrical grid. Yet Mr. Peel (Cliff Chamberlain), the idealistic neophyte on the board, a dentist who has only recently moved to town and is, in the words of another character, “a joiner,” goes on an on about how important rain is, for the same rain that possesses the destructive power they are currently witnessing also causes crops and flowers to grow; its positive characteristics must be taken with its negatives.

Perhaps Letts is arguing in this sharp, biting, at times caustic, at times hilarious political satire that this is also the way we need to take ourselves: people are rarely only a single thing. Certainly, if this month’s headlines have taught us anything, they have taught us that. Great comedians and important lawmakers are still human and, being human, are capable of doing ugly things as well as the good they do. As we read the papers each day, we need to decide for ourselves how to respond to each instance, but there can be no doubt of the universality of the theme: humans are frail creatures. There is no such thing as “holier than thou.” And with great power comes great temptation. Letts’ play begins with a council meeting as the town is gearing up for its annual heritage festival, an important civic event. Peel enters, attending his first official meeting after missing the previous week, which should have been his first, due to the death of his mother. As he makes small talk, he tries to get to the bottom of something he heard as he came in: that Mr. Carp, the one member of the Council he had already befriended, is no longer on the Council after a contentious meeting the week before. No one, however, will provide any details, and the minutes from the previous week are not ready yet. To say much more would be to give away far too much of this play, which depends a lot on the twists and turns in its narrative for humor, character development, and, well, just about everything.

Artistic Director Anne D. Shapiro chose to direct this one herself. She notes in the program that when she looks at what our world is becoming and tries “to understand the motives of people whose words and actions seem so obviously cruel,” she worries about the great divide among us: “this wrenching breach can’t be the whole story.” And she argues that Letts is telling us that it is not, that “the real story is bigger than each of us and bigger than all of us. And it always has been.” Letts has always been good at finding the Big Picture within the small ones, as he did in last year’s Steppenwolf comedy “Linda Vista” and in the Pulitzer Prize and Tony Award-winning “August: Osage County,” the latter of which is similarly-themed to some of what goes on in this one. Here, Shapiro mines Letts’ small town council meeting for all of the interpersonal and political comedy and landmines one might imagine there can be in such a setting. The members of the Council are a varied bunch. In contrast with young Peel’s idealism, we meet the jaded longest-serving (by far, as he keeps reminding us), Mr. Oldfield (Francis Guinan). Guinan milks the “old man” angle for all it’s worth, but he can be spry enough when he needs to be. Second longest is Mrs. Innes (Penny Slusher). Slusher presents a matronly character who seems rather like an old school teacher. (Perhaps she is; who knows?) When she whips out a long missive to read to the Council (“I write better than I speak”), it elicits a chorus of groans.

Others on the Council include Ms. Matz, whom Sally Murphy has tons of fun inhabiting. Matz is…confusing. Is she a ditz? Is she overly childish? Does she simply not care about anything? Is she high as a kite? Whatever: she’s certainly fun for Murphy, whether crawling around on the floor or fighting off unwanted advances from Mr. Breeding (an ironic name for the character played by Kevin Anderson). Letts could not have known, of course, when he wrote this play, that it would be performed at the Steppenwolf at a moment in time when ass-grabbing by prominent figures was in the news, but that just makes the satire all the more prescient and important. I’m sure I was not the only one in the audience literally cringing each time Breeding’s hand came around to Matz’s rear end. Anderson is not all sleaze here, however. Though Breeding is an entirely unlikable character, he comes across as more stupid and unfeeling than slimy…most of the time. And Anderson’s icy line readings give that callousness weight.

William Peterson plays Mayor Superba (another great name), the leader of this crew. As mayor, Superba wants to run the show his way, but sometimes he has to prove he is a fair man. He’s overseen some ugly things, but he is not a Trump: this leader understands why he does what he does and can articulate well why it is necessary. He is a soft-spoken man who, because of his job, carries a big stick. Peterson, with his calm outer layer, is a perfect choice to play him. There is also Mr. Assalone (another great name, though he insists that it should be pronounced ass-a-lon-i), played by Jeff Still, who shows his nature when he asks how Mr. Peel’s mother died, is told by a stroke, and responds, “Way to go!” before returning to his seat. Still does angry really well, which is great because that is Assalone’s primary mode. James Vincent Meredith’s Mr. Blake spends a great deal of the play trying to sell the Council on a money-making scheme called the “Lincoln Smackdown,” a cage match between paid participants and a mixed martial arts expert dressed as Honest Abe. (Yes, it’s as stupid as it sounds, and yes, Meredith has the chops to make it sound sincere.) Danny McCarthy’s Mr. Hanratty has a much more worthwhile notion—a park fountain rebuild for handicap access—but even he seems motivated mostly by the desire to help his sister to see into the water from her wheelchair. Still, of all of the members who were there before Peel, Hanratty seems the most worthy, and McCarthy’s frustration that he cannot convince his colleagues of his plan is palpable.

The only other person present in the room is Mrs. Johnson, the town clerk, who is married as much to her job as to her husband. (She does not even have a photo of her young daughter.) It is she who plays a pivotal role in what becomes the climax of the play. An unsmiling Brittany Burch plays her as someone whose only real loyalty is to the task she has been given to perform. Part of her attitude may be revealed by the fact that she continually refuses to call Mr. Assalone’s name as he desires it to be pronounced. She also forgets several times that Mr. Carp is not there. Carp (a brilliantly laconic Ian Barford) does show up for a flashback, but again I can’t say much of anything about that.

Shapiro keeps all of these varied pieces interesting despite a script that calls for them to be seated in an arc on David Zinn’s gorgeous set for most of the show. (It’s a Council meeting, after all.) Much credit goes to her and the actors for keeping it fun and fascinating. They are helped along by some strong sound work by Andre Pluess and lighting by Brian MacDevitt (both of whose work is great throughout the play but shines especially during momentary “blackouts” caused by the failing power grid. This is a play that pushes all of the right buttons. It will leave its audience a bit stunned and possibly disturbed, and that is the point: you’ll be talking about it all the way home. Then you can go home, as I did, open your computer, and put on the latest news to see what rotten thing someone you respect has done. The rain nourishes but it also destroys, and we all need it. You can’t live without it. No matter what happens, as one character says, “We live here. This is where we live.”

For a detailed discussion of this play with many spoilers, see this post.