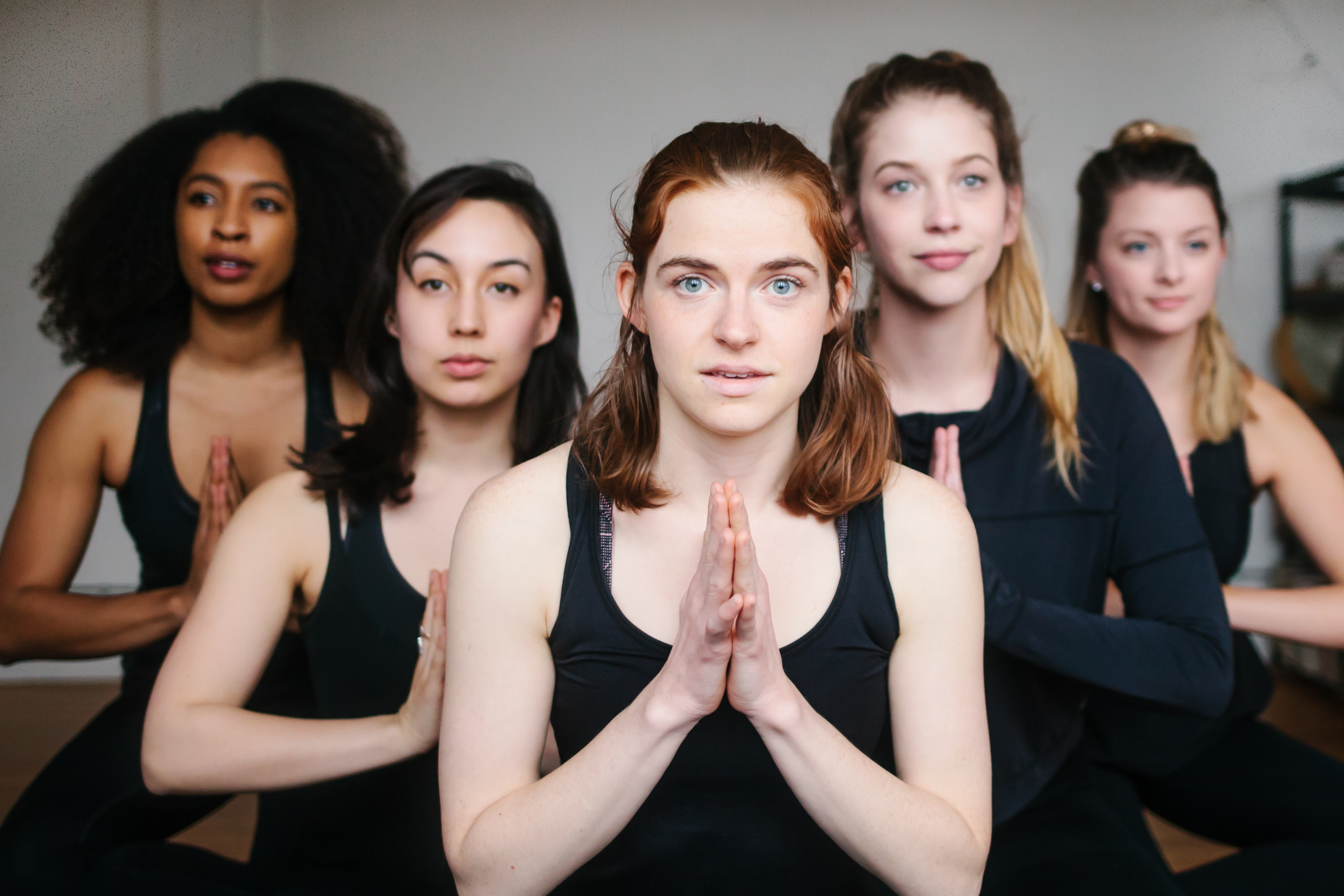 Much has been written about the myriad ways in which our society puts pressure on women to look a certain way. While some women manage to go through their lives wondering if a Size 0 is too big, far more of us have the reverse problem. Our culture, though, wants us thin, and nothing in the culture says that as clearly as the proliferation of yoga pants—those unforgiving legging-like pants that so many women pour themselves into. The problem is simple to see: if you have any bulges at all, your problem is, well, simple to see. For that reason, upscale yoga clothing stores like lululemon don’t even pretend to cater to women of larger sizes. Playwright Beth Hyland (Red Bowl at the Jeffs) takes a funny but critical look at this industry and its ramifications for women in general in her newest dark comedy, Clearing, now being given a world premiere by Commission Theatre.

“Women are their own worst enemy,” one character proclaims, and Hyland seems bent on proving that point. The play takes place in an athletic apparel shop and studio called lalalea where a young woman named Jess (Emma Maltby), recently returned to the city and rather lost, finds employment as an “educator.” From the start it is clear that this company has a cult-like atmosphere: we watch as proprietor Clare (Alex Dauphin) provides Jess with a prolonged lesson in how to engage customers. The very funny scene hides a very serious point: there is a right way to do this, a way identical to the way all lalalea educators address potential “guests.” Variation is not an option, and perpetually-upbeat Clare, whose greatest focus is on making sure that her establishment has “high vibrations,” makes that evident as she rejects Jess’s attempts again and again. Jess has greatness in her, Clare feels, but she’s going to need to work to find it.

The other three educators at the store are Jess’s best friend Agnes (Emily Marso), the somewhat clueless and rather caustic Carly (Charlotte Thomas), and Becca (Lindsey Kite), who can’t quite seem to get the hang of the yoga poses they all are expected to be able to do. When Jess, a former dancer, immediately finds she is able to do them, Becca seems alone on the outside. At lalalea, employees look a certain way, act a certain way, and treat their “guests” a certain way. Becca can’t quite get the hang of any of it, and Kite plays her frustration well: it’s clearly present, but she can’t let others know. It’s a delicate balance but Kite is up to the challenge even if her character isn’t.

Once Hyland establishes it, the delicate balance of life at lalalea is snapped by an event outside of their control: an educator has been murdered at a nearby franchise, leaving everyone at this store in a state of shock. It’s Jess who comes up with the bold idea of a “clearing,” about which she has read in the company manual: everyone in the store comes together for an honest, open discussion of what is on their minds. (What could go wrong?) The remainder of the play is dedicated to the clearing and its aftermath.

Director Claire Reinhart has found an exceptional group of young actresses for this play and done an admirable job of working with them to create their characters. Dauphin easily establishes hers as the alpha here, with her forcefully upbeat attitude and her preternaturally perfect yoga poses. She’s the mama bear of this little clan, ready to do anything at all to help her cubs, even if she has to hurt them in the process. Marso and Thomas take turns providing the “low vibrations,” but their characters have different reasons. Carly seems threatened by the new girl; Agnes finds the whole atmosphere at lalalea difficult to take seriously. Both actors have wonderful moments as Hyland shifts the negativity onto Agnes, who not only is having difficulties with the artificial eternal sunshine of lalalea but is also seeing her best friend slip deeper into its forced bright light.

The weight of the story falls on Jess, who begins the play as a naif crossing the threshold of the powerfully positive Clare and gradually finds herself pulled more and more into the cultish hierarchy. Maltby finds her center easily and quickly becomes the play’s Everywoman. We watch as she becomes subsumed into the store’s mystique, spouting off aphorisms by its founder and quoting freely from the manual and even taking on leadership roles. On the surface she appears to have found herself, but through her deteriorating relationship with the very real Agnes we can see that she is becoming more and more lost. Maltby is a very likable actress; it is easy to feel drawn to her character. Thus we too become sucked into the dynamics of lalalea and are able to experience the pull of belonging.

This is a very funny play; Hyland is adept not only at creating clear and strong characters but at writing humor. But through all of the laughing the play’s serious message is what remains, and the audience is a part of it. We laugh at a group of young women who take this world so seriously, but at the same time we are watching as five young, limber actresses in yoga pants bend their bodies in every possible way, and we might find ourselves making the comparisons that Becca does and lalalea fosters: we aren’t as good as them because we can’t do that. The subversive “ideal” of the yoga culture is unavailable to most of us whose bodies just don’t work that way. Clare would tell us that we are only telling ourselves “stories” of the impossibility, that if we stop listening to ourselves we can in fact do it. But that presupposes a need to do it in the first place. Clearing ultimately tells us that not everyone does. And that is a message that a lot of us need to hear.