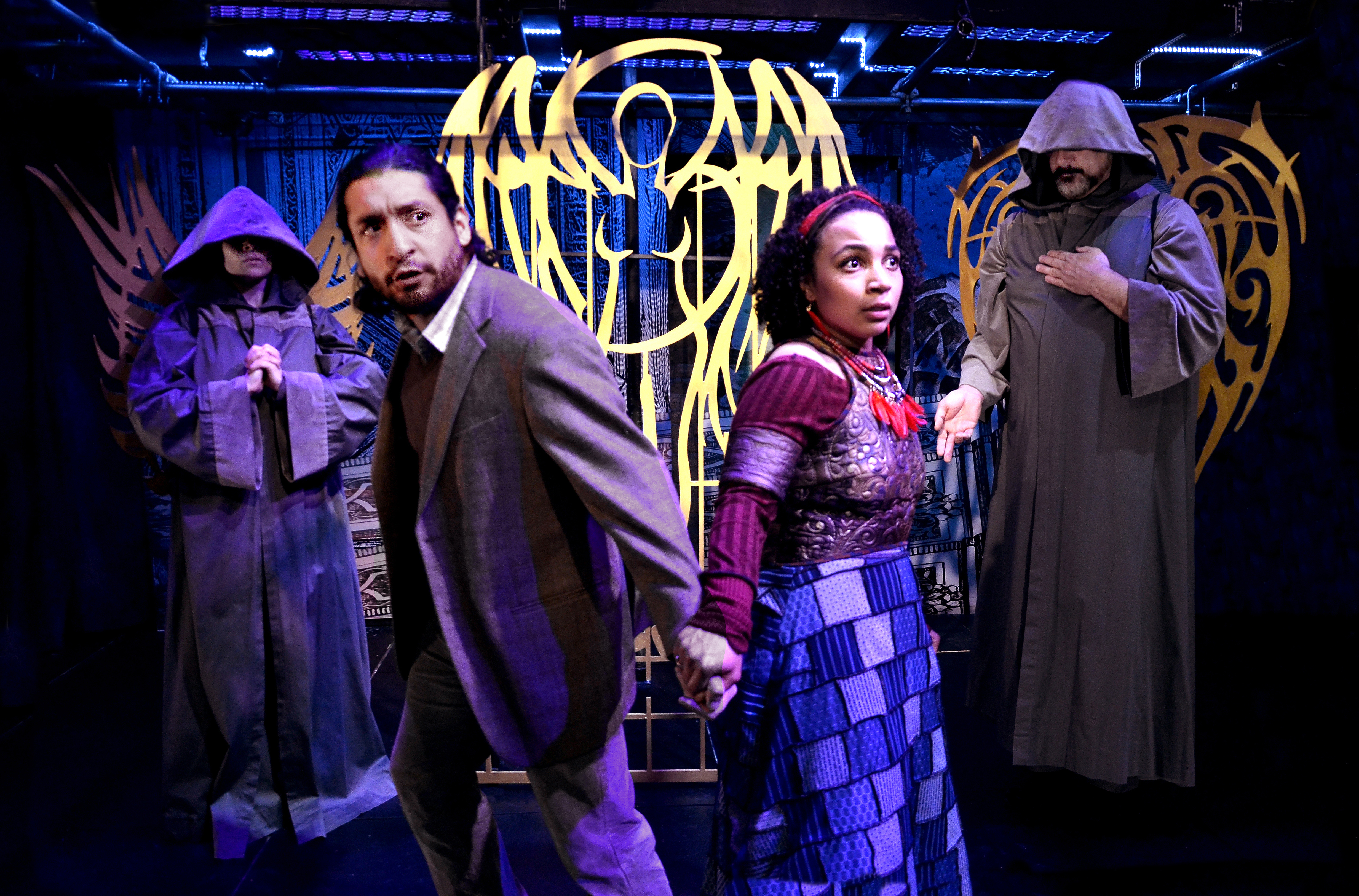 For its final production of this season, Lifeline Theatre is remounting its acclaimed 2010 hit, an original adaptation (by Robert Kauzlaric) of Neil Gaiman’s urban fantasy Neverwhere. Sadly, I never saw the original production; however, I will say that if it was as good as the current one, it definitely deserved the multiple Jeffs that it won. This is a wonderful adaptation and a wonderful production.

Adapting a work of speculative fiction is a difficult choice for any theatre, and Neverwhere is particularly difficult due to its many eclectic locations, its monsters, and the not-necessarily-very-visual power of one of its central characters: opening doors. That Lifeline succeeds on all counts is a tribute to Kauzlaric’s excellent script and director Ilesa Duncan, who takes the audience on a twisted, difficult journey under the streets of London for two and a half hours.

Neverwhere takes place, mostly, in “London Below,” a place underground where citizens who have “fallen through the cracks” in society live by a remarkably different set of rules from everyone in “London Above.” It is the home of magical people, an angel, a monstrous boar-creature, mysterious keys, people who talk with rats, and vampiric denizens who suck the life out of their victims. It is the home of a “floating market” that mysteriously appears and disappears in new locations every time. It is the home of two ancient, nearly unbeatable assassins. And, mostly, it is the home of all of the people whom the regular citizens of London just don’t wish to see anymore. Alan Donohue’s set consists of pipes and boards and a movable staircase, along with walls that have within them enough hidden doors for any magical door-opener to employ herself. And that is what Door (Samantha Newcomb) must do both to stay alive and to complete her personal quest. Door is in danger from the first moments of the play, as the assassins (LaQuin Groves and John Henry Roberts), who have murdered the rest of her family, are coming for her as well. She manages to escape from them temporarily with the help of a kind London Above-dweller who actually sees her as she lies helpless on the street and decides to intercede. Richard Mayhew (Jose Nateras) is thus thrust into the middle of Door’s quest to learn why her family has been executed. Richard, the obligatory newcomer to whom everything needs to be explained, plays a role similar to Dorothy in The Wizard of Oz: he is far from home with no apparent way of getting back in a place he does not understand, but he grows beyond himself as he continually helps the people he finds there. The talented nine-member cast play 25 different characters in this fast-moving, complex production. Most notable among the rest are Matthew Singleton as the mysterious Marquis de Carabas; Aneisa Hicks as Hunter, a nearly superhuman Beast-killer that Door hires as a bodyguard; Dave Skvarla as Old Bailey, a merchant who plays a couple of important parts in the story; Michael Reyes as the Angel Islington, who once failed to protect Atlantis from flooding; and Michaela Petro as Lamia, the white-haired guide with a secret agenda. The entire ensemble is excellent; Duncan could not have asked for a better cast.

Also notable are the lighting design by Becca Jeffords, the sound design by Andrew Hansen, and the puppets designed by Mike Oleon, including very realistic rats and pigeons as well as that gigantic boar. The lighting, which is not only for time passage and effect but also is a critical part of the set design, is impeccable, and Hansen’s sound includes what seems like the nearly constant muttering of the dispossessed, as well as some terrific music. It all comes together brilliantly. But the show rises or falls on the back of Nateras. Richard is a kind of everyman, the hard worker that no one really knows or understands whose richer inner life is symbolized by the troll dolls on his desk. He does not deserve to have his entire life whisked from beneath him, but his kindness in helping a stranger (Door) hastens its collapse. (Twice we are told that a good heart is unlikely to get anyone through the turmoil of life.) When he first arrives in London Below, Richard is shaken by everything he encounters. But he has the stuff of greatness within him, and Nateras’s performance allows us both to see his character change and to make this accidental voyager into the tale’s hero. If we don’t care about Richard, the whole play collapses, but Nateras makes sure that doesn’t happen.

As Door, Newcomb has a different job. Door’s ability makes her both powerful and hunted. It also could render the character a bit static; after her frantic opening, Door essentially leads Richard on a harrowing journey around the Below. But in Newcomb’s capable hands, Door manages to become as sympathetic as Richard, and she has several really effective moments as the action plays out. One very early example is her decision to take him with her in the first place. Newcomb is very expressive as the gears in her head turn and she realizes that his plight is all her fault. Between the two of them, Nateras and Newcomb make a great protagonist duo.

Yet another play that seems almost to have been written for our distorted times, Neverwhere tackles the key question of how society deals with its outcasts, and the answer (as it surely is in our current political state) is not very well. Neverwhere says that we completely ignore them and they vanish into the cracks. Of course, reality is more malevolent, as many among us play the role of the assassins here, seeking out the “different” people in order to destroy them. As allegory, Gaiman’s tale works even better than it did when he wrote it. As theatre, Kauzlaric’s adaptation keeps the audience riveted, doing Gaiman proud. Due to something having to do with rights, this will be the last production ever of this script; do yourself a favor and don’t miss it.