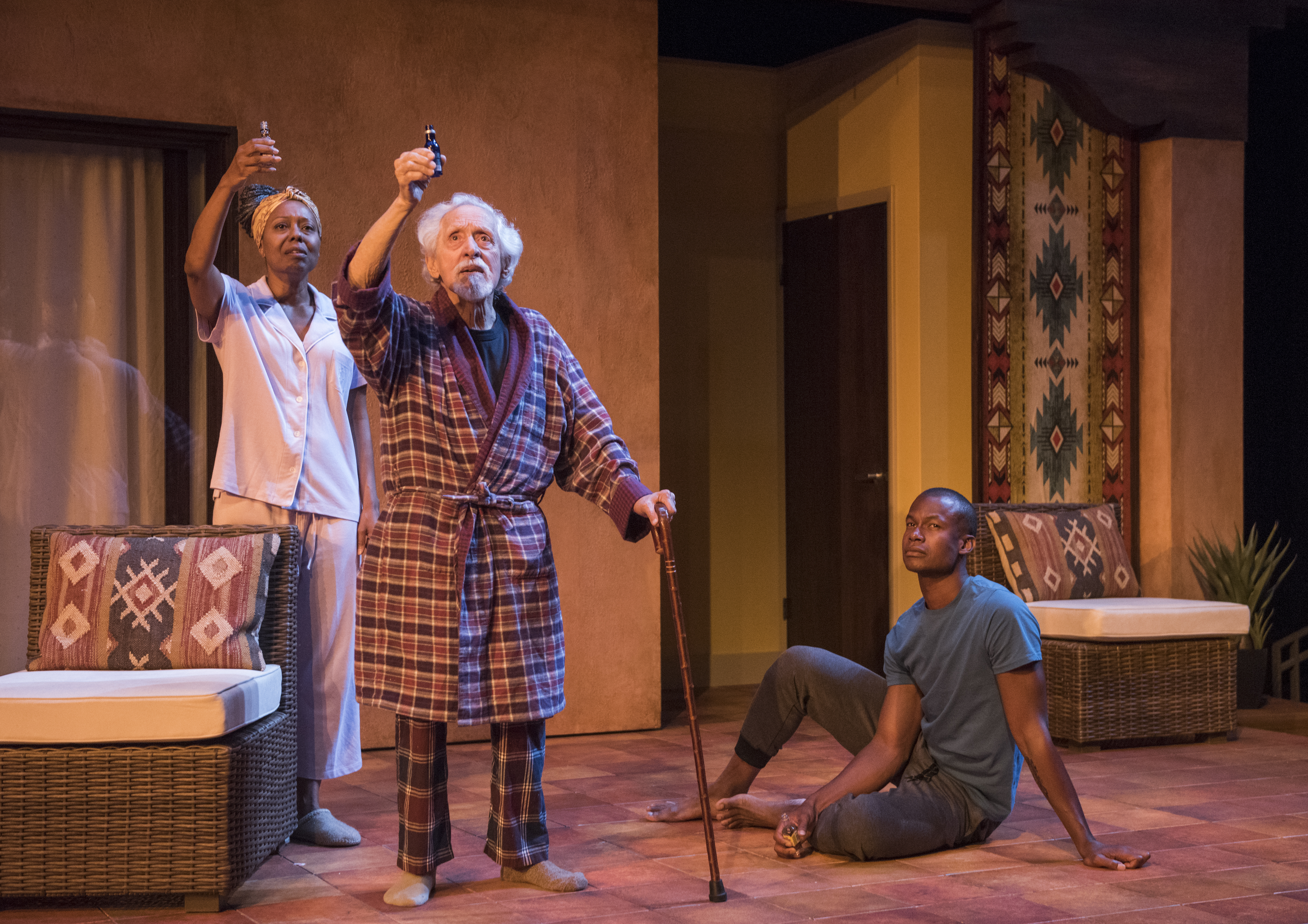 Rachel Bonds’ Curve of Departure is a little gem of a play. Set in a New Mexico hotel room where a “ragtag little group of humans” has gathered for the funeral of a man each of them loved at one point but has reason to hate, the play is a brief glimpse into what human beings can be when they are at their best.

The very fact that they have come to the funeral tells us something about these people. Cyrus (the deceased) is described as a “schmuck” by his own disappointed father and was hated by his wife and son for abandoning them for a new family. Yet here they are, these three, along with the son’s boyfriend, having traveled a long way to bear witness. It speaks loudly about the difficulty in severing the relationships we make in life. Even his wronged ex-wife, who now cares for his father in his old age, feels the need to come.

The wife, Linda (Penelope Walker), has dedicated her life to caring for Rudy (Mike Nussbaum), who is in the middle stages of Alzheimer’s and deals not only with the memory loss but also with severe diarrhea. She is even ready to quit her teaching job to support him. Meanwhile, his grandson Felix (Sean Parris) and Felix’s lover Jackson (Danny Martinez) struggle with their recent fostering of Jackson’s niece due to her abusive father and drug-addict mother. While Jackson is ready to write off his sister along with the rest of his family, he can’t bear to leave the niece to the vicissitudes of the state foster system. And his need to protect her is putting stress on his relationship with Felix. The acting here is top-notch. Walker plays Linda as world-weary but ready to do what she needs to do. The weight of her decision is evident, but there is never anything less than tenderness in her relationship with Rudy, even when she needs to help get him clean after an accident. Nussbaum has a great time with Rudy, a New York Jew from a large family that lived, as he tells his grandson several times, in a tiny home where you never could be alone, even in the bathroom. (Ironically he can’t be alone in the bathroom now either; life often reflects itself in such ways.) Rudy is given to long flowery speeches, especially about his deep affection for the city of his childhood, and Nussbaum delivers them as relating a particularly lovely dream. Nussbaum also gets plenty of laughs from Rudy’s selective hearing and loss of memory, both of which Bonds’ script is careful about: while there is certainly inherent humor in the character, Bonds shows us the loss of dignity and Rudy’s increasing sense of being a burden to Linda as well.

The two young men have a complicated relationship. Paris plays the tension that the niece brings to their lives well, having first set up the depth of their love before a phone call from home (her temporary caregiver while they attend the funeral) disrupts the harmony. Felix’s concerns are legitimate: here is something being foisted upon him that he didn’t plan for, and he has been a meticulous planner. No one blames him for his reaction: everyone here (except Rudy, who remains oblivious to the problem) knows that he is doing his best. Martinez, for his part, is perfect as the young man in a very difficult position who knows he has to do what is best for the girl “no matter what it takes.” Jackson’s genial personality and deep affection for Felix make the conflict stronger: can their bond survive his newfound “fatherhood”?

B.J. Jones directs this short (75 minutes) play with an easy-going style that works well with the characters. He does not rush things, allowing them to play out in their own time. This helps the moments of high-pressure (Rudy’s bathroom trips, Jackson’s phone call) to stand out in sharp contrast to the rest. And the performances Jones gets from his actors are perfect; from the sweet and giving Linda and Jackson to the confusion of Rudy to the tension of Felix, everything is allowed its opportunity to build. Lauren Nigri’s set design is lovely: she honestly recreates an airport hotel room right down to the cheap art on the walls. Lighting (by Heather Gilbert) and sound (Andre Pluess) add to the mood without being intrusive. Alexis Chaney’s simple costuming choices are perfect as well; this is a well-designed production.

Ultimately what we are seeing here is a small slice of life celebrating the ability of human beings to overcome the emotional obstacles in their lives and help one another. In a time when the country seems to have largely lost its collective conviviality and cheer, this is the kind of theatre we need every once in a while, a reminder of the good we can find in each other if we seek it out.

Curve of Departure is now playing at the Northlight Theatre, 9401 Skokie Blvd, Skokie, until Oct 21. Performance times vary; check the website at Northlight Theatre for tickets, schedule and times. Find more information about current plays on our Current Shows page and at theatreinchicago.com.