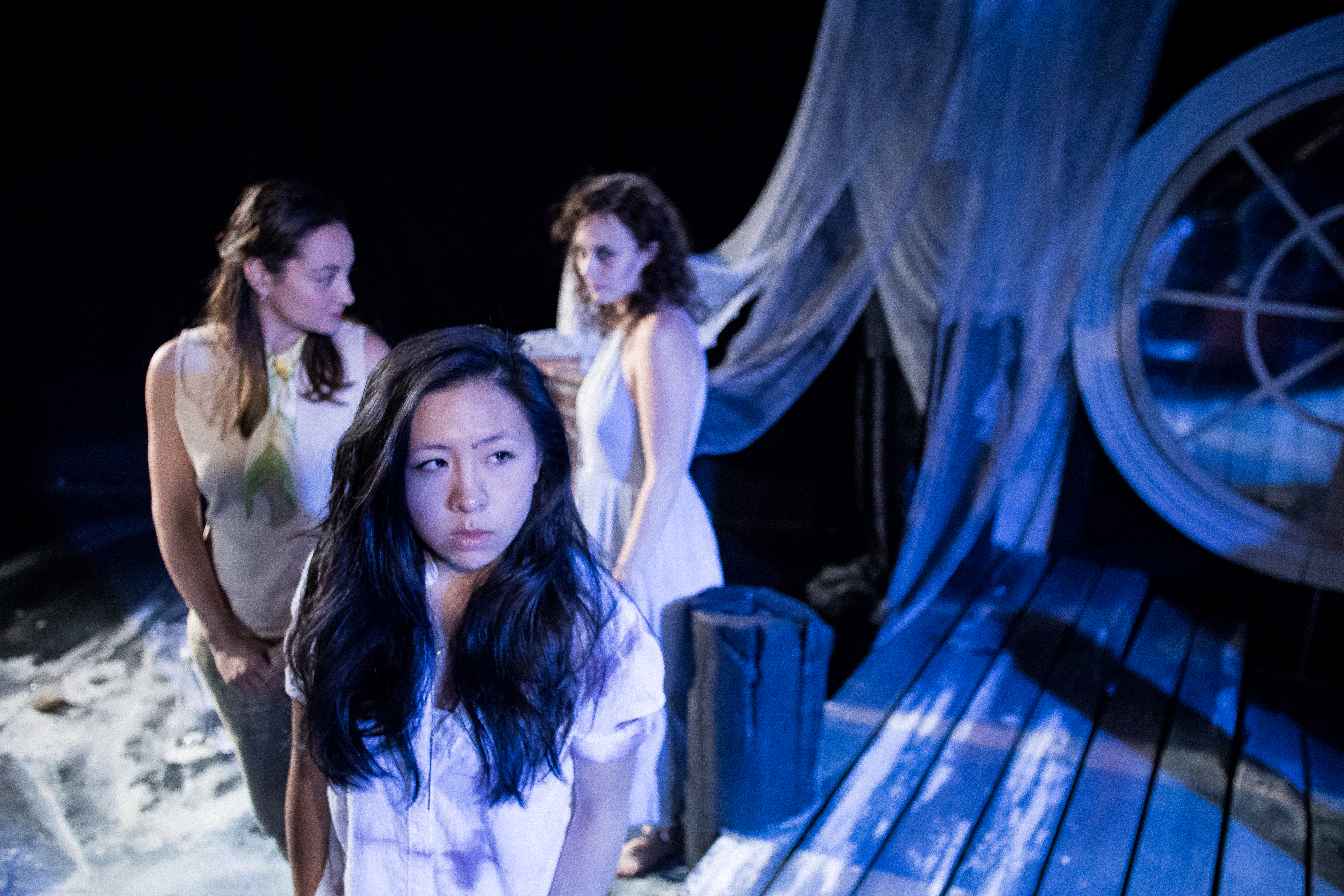 There are some times when the script of a play is just so darned good that you don’t want to say much about it; you just want people to go and experience it. Such a case is the hauntingly beautiful Second Skin, now playing at the Den Theatre in a Wildclaw Theatre production. Kristin Idaszak’s moody and poignant portrait of three women in the same family and a darkness that they share captures you from its first magnetic moments and just won’t let you go. The play is structured as three interconnecting monologues that end up revealing secrets about Sigrid (Paula Ramirez) and those closest to her. It opens with her daughter, Quinn (Stephanie Shum) giving one of the most realistically-cadenced monologues I can recall seeing. Every word is delivered as if it is just coming into her head at the moment. Now that should probably be SOP, but it’s surprising how many directors don’t allow a monologue to build at its own pace. Jess Hutchinson is not such a director; Quinn’s naturalistic opening monologue is full of the kinds of pauses and jumps in phrasing and content that a person actually telling this story would have, and Shum handles it brilliantly; within seconds, we can easily believe that we are hearing a real person talk, rather than the too-polished writing and performance one often sees. She begins by relating one of her mother’s bedtime stories about selkies (the spirits of drowned women in the guise of seals) and then moves on to reflect on the difficulty of her relationship with Sigrid, whom she is now nursing as she grows weaker from ALS, leading to a monologue from Sigrid herself. Ramirez’s character is surprisingly endearing, and the actress is completely ingratiating. Of course, during her monologue, we discover that Quinn’s perceptions of her mother and their lives together may not be completely accurate.

But these two are not alone: when Quinn recounts a meeting with a mysterious woman at a bar, you just know that the woman will become important. She does (in ways I will not reveal), and Hilary Williams is a powerful presence during her monologue (thanks in no small part to Anna Wooden’s costume: it is amazing). Like the other women, Williams’ monologue has its own idiosyncratic and ethereal rhythms—Idaszak is especially good at creating different voices—and Williams slightly otherworldly performance plays greatly with the various emotions that she exhibits. The all-female-led production staff also includes Lizzie Bracken, whose eerie, ocean-themed set, scattered with liquor bottles, announces a dark play the instant you walk into the theatre. Kaily Story’s lighting design, relying a lot on blues and golds, plays with the mood throughout the monologues. And Sarah D. Espinoza’s sound design includes eerie music and perfect sound effects. This was a total team effort, but the responsibility rests with the director, and Hutchinson makes excellent decisions about stage use and pacing while getting stellar performances from her actors.

Horror is a difficult genre to make work in a theatrical setting, and to be sure this play isn’t your stereotypical horror story, especially for the 21st Century. That means it never relies on cheap thrills, blood and gore, jump-scares, and the now-ubiquitous array of tools that every horror producer has in her repertoire. It’s more subtle, more slow-building than that. Each performer builds on the words that came before her, adding layers to the puzzle until all is clear. This 80-minute drama wastes not a second.

Second Skin is a remarkable production. Walking out of the theatre, you will carry with you not only the unforgettable story, but the impressions that all of the designers make and the haunting memory of Idaszak’s poetic language and characters. It’s a play that can’t be told about; it must be experienced. And I highly recommend that you do so.

Second Skin is a Wildclaw Theatre production now playing at The Den Theatre, 1333 N. Milwaukee, Chicago until Oct 13. Performance times vary; check the website at Wildclaw Theatre for tickets, schedule and times. Find more information about current plays on our Current Shows page and at theatreinchicago.com.