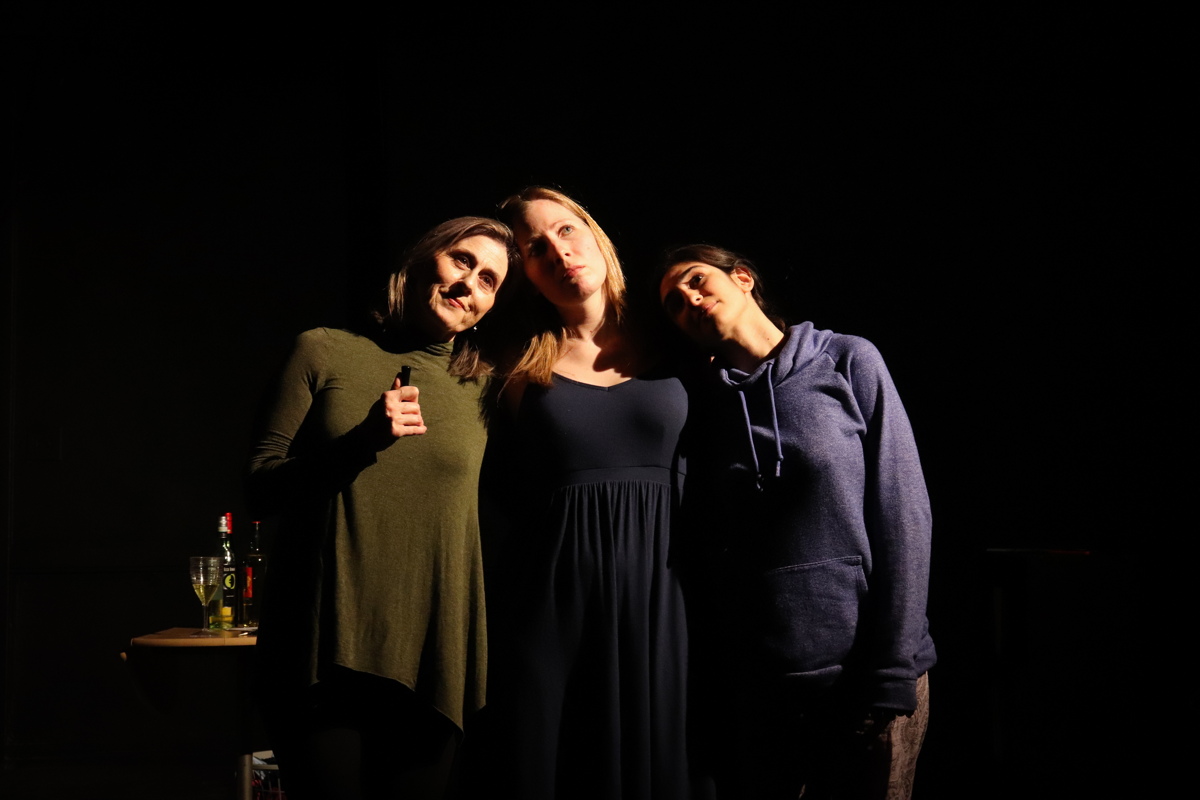 Every once in a while you run into a show that is presented most sincerely by a troupe of very good actors and even well-directed, but the bottom line is that it doesn’t work as well as their efforts demand. That is the case with Lured: The Curse of Swans by Terry Boyle, a Right Brain Project presentation now playing at the Athenaeum Theatre. As an acting exercise, it allows the three cast members of this play to show themselves off nicely. As a play, though, it is severely overwritten, slathering on the symbolism to an unnecessary degree and ultimately, as its secrets are revealed, making little sense.

On a sparse black box set, we first hear an Irish folktale about the children of a king being turned into swans by a mean stepmother before we get to meet the three surviving members of a family whose patriarch killed himself ten years earlier. Grainne (Sylvie Sadarnac) is the mother whom the girls blame for their father’s death. She has spent the last decade talking to her late husband’s ghost…or maybe losing her mind; take your pick. Her eldest daughter, Maeve (Liz Goodson), tried to join her father last year and now, having been diagnosed bipolar, numbs herself with wine to avoid facing the idea of telling her mother that she is gay and that her lover is the black girl who lived next door all those years ago. The younger daughter, Deirdre (Annabella De Meo), has her own burden: she is pregnant as a result of a drunken off-guard moment at a friend’s party. All three women have secrets; all three need to face them.

The women, who never see each other though they all live in Chicago, are about to embark on a trip to Ireland where, they assume, they will finally be able to talk about things they have never said. But on the eve of the trip, Maeve sends each of the others the Irish folktale we heard at the start, and it takes on new meaning for each of them. For Grainne, especially, it signifies how deeply her daughter mistrusts her, as she sees herself in the role of the evil stepmom. To the daughters (who call themselves Swan 1 and Swan 2 despite the fact that this story was allegedly just sent out and Deirdre, for one, claims not to have read it yet—not the only part of the script that makes little sense), it seems to be about their bond as sisters. And Maeve in particular, who has in her possession (for some reason) what appears to be the swan dress that Björk wore to the 2001 Oscars, sees the concept of being a swan as a cure for her inner feelings of ugly-ducklingness.

The symbol of the swans is layered on so thick that you’ll be forgiven if you just want to say, “All right already, I get it!” and move on. But Boyle’s script won’t let you move on. There’s another symbol as well, a “Christian bell” that, if it tolls, will allegedly send Papa’s ghost packing, but that too is overdone: we must hear about it ten times. These are excellent concepts, but Boyle is guilty of severely piling them on. We just don’t need that.

Director Becca Holloway, who says she chose this show because it’s a women’s play and she liked the combination of Irish magical realism with three women both separated and linked together (the women are in three different locations the whole time and joined by phone calls), does a wonderful job of keeping each of them in her own space (and keeping those spaces alive even when someone else is talking). She also draws from each actress a powerful, emotional performance, but she can’t do much about a script that just doesn’t trust itself or its audience.

For their part, the actresses are solid. Sadarnac goes back and forth between her fantastic visitations from her husband and her phone calls with her daughters. In the former, she can smile: even Grainne sees the absurdity of this. In the phone calls, though, she’s always just on the edge of tears. She toes that line pretty well, given the secret burden that she is bearing. Goodson’s Maeve is firmly in the depressive cycle of her bipolar disorder, and as she gets slowly inebriated she slides deeper and deeper into the darker corners of her mind. Goodson allows us to easily see the depths of Maeve’s emotions in an excellent performance. De Meo has some fun with her role, as Deirdre is afforded some comical lines by Boyle, unlike the others. De Meo, a very likable actress, plays both her character’s frustrations and affections beautifully. The most realistically written of the three, Deirdre contrasts well with her mother’s eccentricity and her sister’s poetic depression.

But solid acting and fine directing just aren’t enough with a script this problematic. Once everything is revealed, even the ghost thing ends up making less sense. (Boyle throws in a line to try to explain it, but it just doesn’t work.) This is a case of a strong ensemble sincerely performing an overwritten, heavily symbolic play. They do everything that they can, but, to quote an old saying, you can’t put lipstick on a pig. Or, it seems, on a swan.

Lured: The Curse of Swans is now playing at the Athenaeum Theatre, 2936 N. Southport, through April 6. Check the website for specific dates, times, and tickets. Find more information about current plays in our front page recs and at theatreinchicago.com.