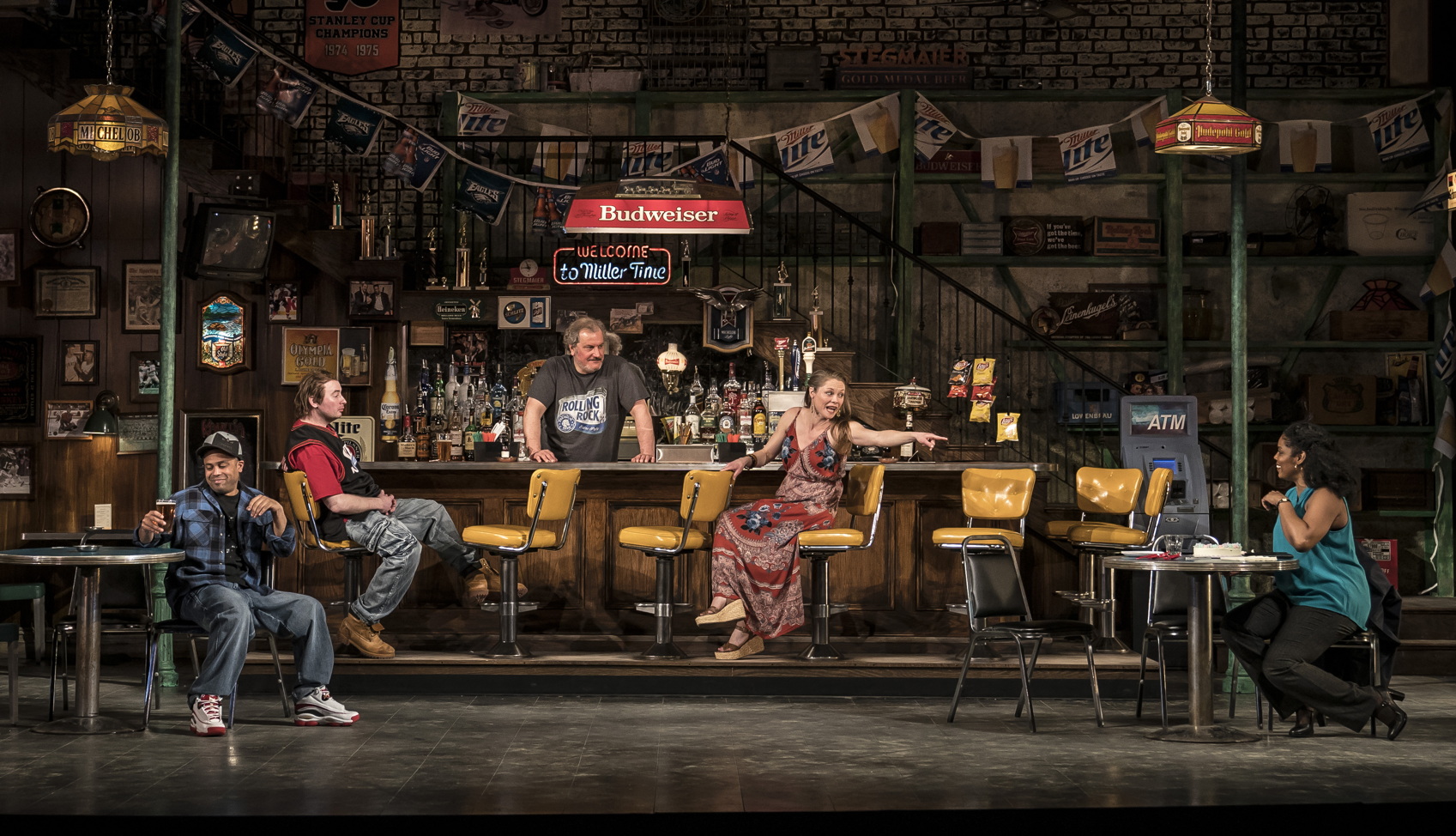 I’m just going to come right out and say it: The Goodman Theatre’s production of Lynn Nottage’s Pulitzer-Prize winning Sweat is just about as good as theatre can get. Director Ron OJ Parson has taken Nottage’s play and found in it even more power and nuance than the already-brilliant script has in it, if that is even possible. The play captures the plight of working-class people in a factory town (Reading, PA in 2000) that is in the process of falling apart. NAFTA has already seen one of its large factories shut down. Another has been on strike for two years. And the biggest of all, the steel plant, is next in line. As management grows tired of paying top dollar, people who have invested their entire lives in jobs on a production line where their fathers worked before them suddenly find themselves facing obsolescence. The tensions that rise are totally understandable, and the impact on lives is devastating.

Among the lives that are impacted are two young men named Jason (Mike Cherry) and Chris (Edgar Miguel Sanchez). We first meet them in a scene in 2008 when they each have just gotten out on parole for a crime committed eight years before, as their parole officer (Ronald L. Conner) tries to help them reintegrate into society. The rest of the play consists of the events leading up to that crime, one that took away the promise of both of their lives. Cherry and Sanchez play the parts of these two both as ex-cons and as twenty-somethings with dreams of the future on their minds. Chris wants to be a teacher. Jason wants to retire from the line at some point and open a Dunkin Donuts. They each have their lives mapped out, but Nottage’s script allows us to know from the start that their dreams won’t come to fruition.

Most of the play takes place in a bar in Reading run by Stan (Keith Kupferer), who was forced to retire from the steel plant years earlier due to an injury. There we meet three workers, Cynthia (Tyla Abercrumbie), Chris’s mother; Tracey (Kirsten Fitzgerald), Jason’s mother and Cynthia’s best friend; and Jessie (Chaon Cross), another friend who is also an alcoholic. We also meet Brucie (André Teamer), Cynthia’s substance-abusing estranged husband who has spent the last 93 weeks walking a picket line, and Oscar (Steve Casillas), a Colombian American working as a busboy in the bar.

Although no one is getting rich in Reading, the seemingly safe jobs at the factory make life feel comfortable enough. The boys and Cynthia are even dreaming of cruises. But all hell breaks loose when the factory decides to lock out its current workers and replace them with scabs for far less money. Cynthia, whose recent promotion has already caused tension among the friends, finds herself even further away from them, and they blame her for not fighting hard enough for the people she worked side by side with for 24 years. Suddenly everyone is on the picket line instead of the production line and facing unexpected economic woes.

Nottage’s script is very sympathetic to the plight of the workers here; after all the whole thing is told from their perspectives. The factory owners are making unreasonable demands of them (a 60% pay cut!) and they don’t want to cut their own throats. But at the same time she realizes that we sometimes make the beds we lie in. After generations of working in one place they have grown complacent, and they have not taken the clues of what is happening around them to heart. As one character sadly realizes, the “writing’s on the wall, and we’re still out here pretending like we can’t read.” Another character explains that “nostalgia’s a disease,” one they are all falling victim to. Even the character of Cynthia, a worker turned management, desperately wants to help her former linemates but is powerless herself to stop what is coming. Like all of them, she has sweated for decades in the factory but is in danger now of becoming a kind of figurative “sweat”: something to be wiped from the face and forgotten.

Parsons gets wonderful performances from everyone in his stellar cast. Kupferer is perfect as the grizzled philosopher barman who suddenly finds his place “neutral territory” in a civil war. Abercrumbie and Fitzgerald, representing the two sides of that conflict, are towers of strength hiding real vulnerability. Cherry and Sanchez manage to portray youthful exuberance and, in their 2008 scenes, a deep sadness. The whole ensemble here is so strong that you can actually believe you are watching this town coming apart at the seams. And the Kevin Depinet set helps here: the bar is so fully realized that it even has an offstage upstairs section. The contrast to the parole officer scenes couldn’t be more stark: they are set on simple chairs against a black backdrop, which is what these boys have been reduced to from once-vibrant lives.

Sweat is a powerful examination of the plight of small town America, depicting what once was its promise and now is simply rage. When there is nothing left of the lives you’ve created with your own hard work, when it is being taken away from you to help the owners make more money, when a promising future suddenly looks very bleak, what does a person do? Stan can say, “Sometimes I think we forget that we’re meant to pick up and go when the well runs dry,” advising at least the young ones to move away and move on, but it’s not always that easy. Although he is keenly aware that the town that “used to be something” is now “nothing but mildew lingering in these cracks,” he himself hasn’t left. Perhaps, being a bartender, he’s in better shape than most. Frustrated people will always seek out a drink. Nottage is interested here on the tolls that these losses take on human beings, from the strung-out Brucie to the young Colombian Oscar. It is not an uplifting play, but it accurately depicts the lives that remain when the “well runs dry.” Sitting high and dry in a thriving city, we don’t necessarily understand what life is like in a factory town when the factory closes down. Nottage takes us there, and it’s a bumpy ride. Watching her play, though it ends in 2008, long before our current political times, it becomes easy to understand how this kind of frustration might have led people to fall for a con man who claimed he could bring the jobs back. In that state of desperation, I might have believed him too.

Sweat is now playing at the Goodman Theatre, 170 W. Dearborn, through April 14. Check the website for specific dates, times, and tickets. Find more information about current plays in our front page recs and attheatreinchicago.com.