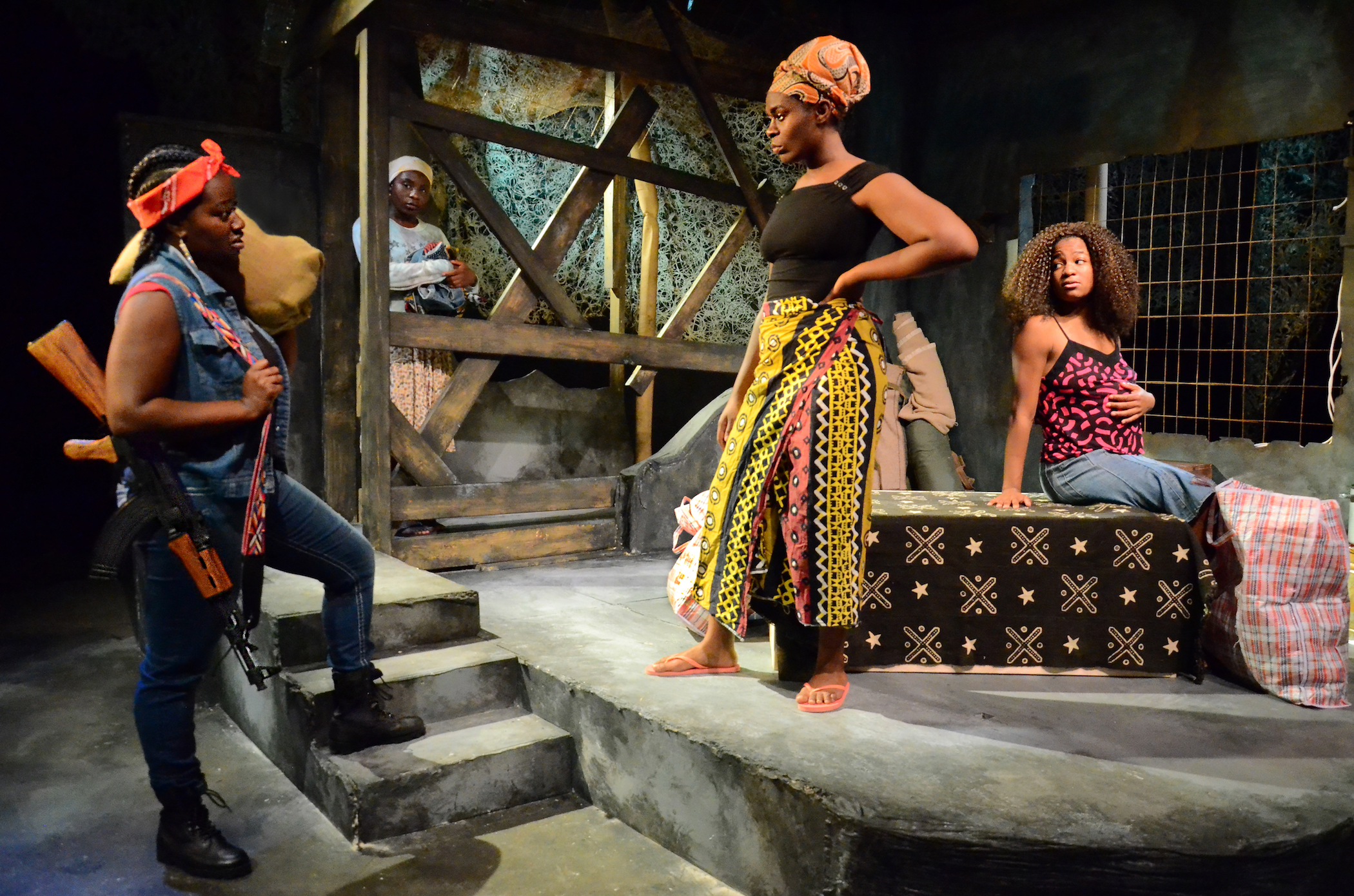 One of the most wonderful things about theatre is the way it can expose you to places and events with which you might have had a vague familiarity but could honestly say you knew nothing about. That’s what will happen for most viewers of Pegasus Theatre’s newest offering, Danai Gurira’s Eclipsed, now playing at Chicago Dramatists. Eclipsed, directed by ILesa Duncan, takes place in Liberia during second Liberian Civil War in the early 2000s, while warring factions were trying to depose President Charles Taylor. It takes place at the camp of one Colonel, who has captured several woman and made them his “wives.” However, though the ongoing war forms the background in which this play exists, it is the stories of the women themselves—and the choices that they make—that form its core.

The specific setting is a partially open one-room hut where the wives live. A fifteen-year-old girl (Sola Thompson) takes refuge with them, but it isn’t long before the Colonel makes her Wife #4. The Girl tries to fit in, but she really doesn’t like being the new favorite of the Colonel; when Wife #2 (Adhana Reid), who had left to fight with the freedom fighters, stops by, she is thoroughly impressed that someone has been able to determine her own fate in this horrid time and place. Wife #1 (Maya V. Prentiss) tries to convince her to be smart and stay safe with her and Wife #3 (Aja Singletary), telling horror stories about what soldiers do in the field, but The Girl is torn between the two equally unappealing options.

We never see or hear the Colonel, but he is always a looming presence for these women. Their lives revolve around making him meals and being chosen to lie with. He does, however, bring them gifts—the spoils of the war: a book, a tape player, hair extensions, and lots of clothing. The Girl, who is a little bit educated, entertains #1 and #3 by reading about Bill Clinton’s fights with Congress. (They assume Monica Lewinsky is his Wife #2.) This is one of two sources of ongoing comedy in the play; the other is #3’s infatuation with clothes and lack of real world knowledge. Singletary is wonderful as the stubborn pregnant teen who calls all outside women “witches” and wants little more from life than to bear the Colonel’s baby and listen to music on the radio.

However, Rita, a member of the Women of Liberia Mass Action for Peace (Morayo Orija) who has lost her own daughter, probably to some other warlord like the Colonel, shows up at the camp and brings her notions of freedom to the women. Though at first she simply doesn’t understand, #1, who tells the woman that her birth name was Helena, falls under her spell. Something about learning to spell her own name sets her mind yearning for more current information about the war, which Rita tells them is almost over. Prentiss allows this authority figure to show more and more vulnerability as the play goes on and she become more aware. But nothing in Helena’s discoveries lets her feel any more community with #2, who is now one of the soldiers who captures women for the powerful military men. Reid has a dynamic stage presence and her character can switch from sweet and tender to harsh and yelling in a second, a technique that she has learned in the war to force people to listen to her. She’s also learned that, since she now has a gun, men no longer mess with her.

From the start, though, the play’s focus is on The Girl (who might or might not be Rita’s daughter). When she is ravaged only ten minutes into the play and continues to be the Colonel’s plaything, she is forced to reassess her innocent view of the world. #2’s lifestyle—not having to worry about being raped, being able to gather as many clothes and other things from the war as she wants—appeals to her. But to be successful she will need to give up at least part of her soul, and whether she can do that is Gurira’s central conflict. And the loss of innocence (for it is lost either way) is her central focus.

Duncan, because of a beautifully designed set by Jacqueline Penrod, lit by Megan Turnquist with very realistic guns and other sounds provided by Tony Bruno, is able to focus her audience’s attention during The Girl’s long walks to and from the main house. And the simple action of stopping at a water bucket to “wash out’ says all the words no one really needs to speak. Duncan uses every inch of the set (and an aisle) to keep the action moving along briskly, and gets brilliant performances from her actors. She is also adept at finding the underlying humor in a hopeless situation.

We’re more than a decade removed from the Liberian Civil Wars, but this is a story that is far more universal than that. The plight of these women (and the less fortunate ones who are “shared” by many soldiers at once) is a stark reminder of what the #metoo movement is supposed to be resolving, but it is also a reminder of how far we have to go to remediate centuries of vile behavior of men toward women around the globe. When the only choice is to fight oppressors, that’s what must be done. The structure of this play makes that point well, and also presents the notion that the men who “eclipse” these women, who steal their lives and their backgrounds and their families and leave them as casualties of a war they didn’t choose to be part of, themselves deserve to be eclipsed. But you don’t eclipse them, as #2 does, by becoming them. You eclipse them by making yourself better. It may not be as sexy as holding the gun, but ultimately it is much more effective.

Eclipsed is a Pegasus Theatre production now playing at Chicago Dramatists, 773 N. Aberdeen St, Chicago until Nov 4. Check the website for specific dates, times, and tickets. Find more information about current plays on our Current Shows page and at theatreinchicago.com.