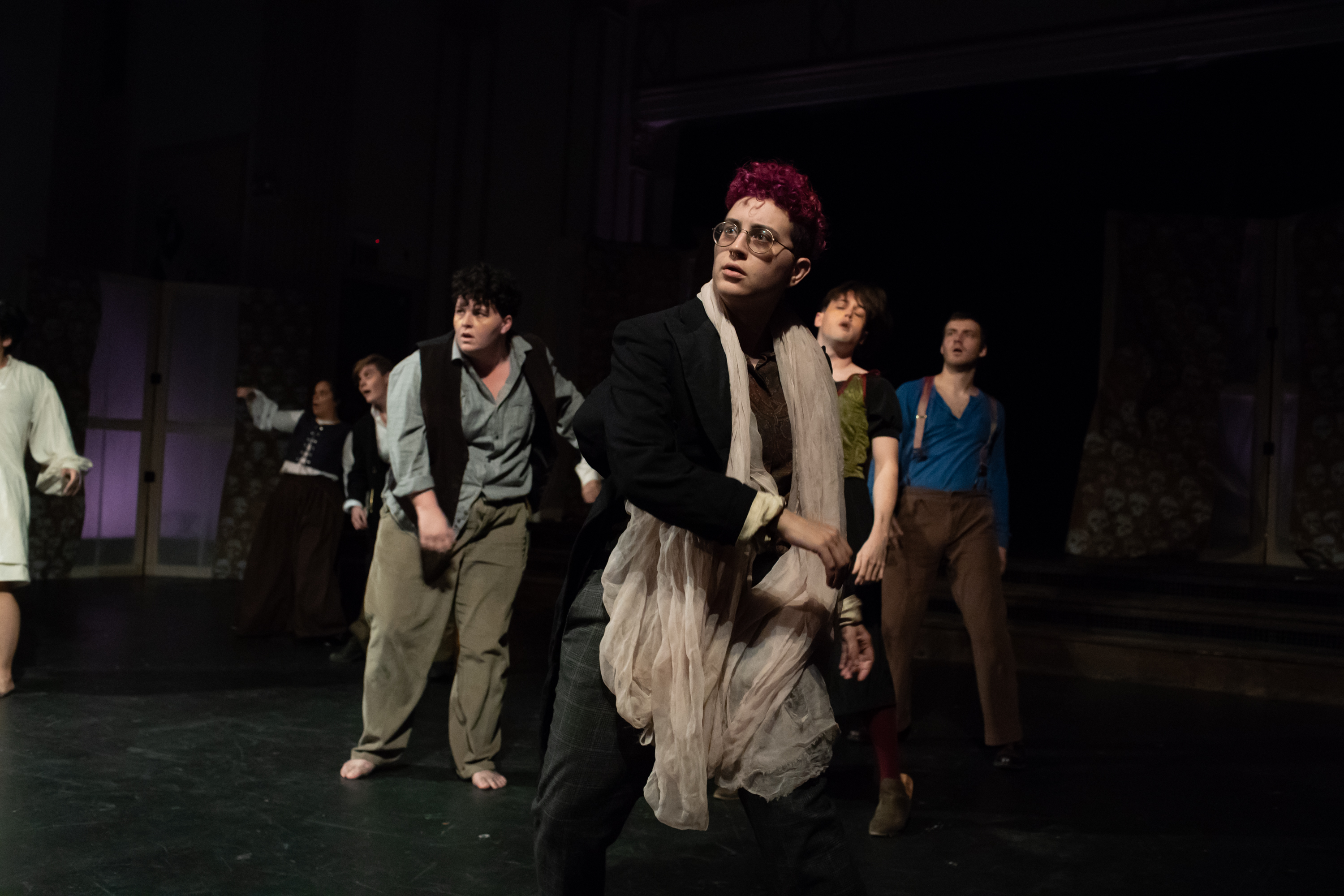 For the second time this month, a Chicago theatre is setting a play in the catacombs. Unlike Right Brain Project’s Odessa, though, (re)discover theatre’s Les Innocents/The Innocents takes place in the Paris catacombs. In both plays, a living person enters the tombs and comes face to face with death. That, however, is about all they have in common. Whereas Odessa’s main character was dumped in the catacombs by thieves, Gui, the central figure in The Innocents, enters on their own. Gui, a composer, has lost their muse when their lover Mathilde died; they enter the catacombs to find her ghost and get their muse back. (Note: other characters consistently refer to Gui as “they”; I’m following suit.)

At the start of The Innocents, audience members gather in a small hallway awaiting entrance to the catacombs and thus the play. (I feel that there should be a drinking game attached to the number of times I say “catacombs” in this review. It would leave a lot of drunk players in its wake.) After a brief scene played out in the hallway in which a palm-reader tells Gui that to find Mathilde they need three “ingredients”— a lit candle, a “sacrifice,” and a secret, we follow them into the darkness on their search. There they meet a mysterious catacomb dweller named Jacques who says that he can help Gui find their way and promptly vanishes, leaving Gui to enter a vast chamber within the tombs alone. (The play is performed in the Preston Bradley Center’s Mason Hall, great venue for this type of thing.)

Once in the chamber, Gui calls to Mathilde using the candle, his own blood, and a song (their song, his “secret”). They hear her in the shadows but instead of Mathilde they find themself face to face with a large group of dead people who were “awakened” by their light. There is an unnerving scene in which the dead chase them about, trying to grab the life-giving candle, before Jacques re-enters with a huge hand-drawn map of the catacombs. From there, we get to know the various denizens in this dead place while Gui waits for their love to appear.

The Innocents makes a lot of its connection to Hugo’s Les Miserables: one among the dead died on a barricade, another was shot in the street. It also makes a lot of use of music, as two among the dead are musicians (who still somehow have their instruments). There is a long and energetic dance break that, to be honest, is fun to watch but illogical; it comes out of nowhere and Gui, who should be looking for their love, joins the dance. Gui’s lovely song for Mathilde is also prominent and sung more than once.

The Innocents is a play that will leave you with many thoughts. You might find yourself watching your path for dead bodies. You might think about the discussion of suicide and death; the dead argue that all deaths are about either love or loneliness, especially suicides. You might think about the role that music plays in our lives. You might want discuss the nature of theatre and art after watching 85 minutes that don’t resemble anything like a traditional play. You might reflect on the fine performances that creator/director Ann Kreitman got from her ensemble of actors, including Emilie Modaff, Vahishta Vafadari, Amanda Forman, Alec Phan, Andrew Lund, Matthew Lunt, Maggie Miller, Deanalís Resto, Erich Peltz and Levi Shrader. You’ll probably be haunted by an ending that leaves the dead in the catacombs while ushering you out...with no chance for applause. Or you might just ponder the meaning of love and whether it might be a thoroughly selfish emotion.

This is most definitely an unusual show, and it’s not for everyone. But if you do venture during Halloween month into the catacombs to visit the dead, you’ll be in for an evening that at minimum will make for a thoroughly different kind of experience. And when actors sell a bizarre concept as well as these ones did, that may just be enough.

Les Innocents/The Innocents is now playing at the Preston Bradley Building, 941 W Lawrence Ave, Chicago until Nov 4. Check the website for specific dates, times, and tickets. Find more information about current plays on our Current Shows page and at theatreinchicago.com.