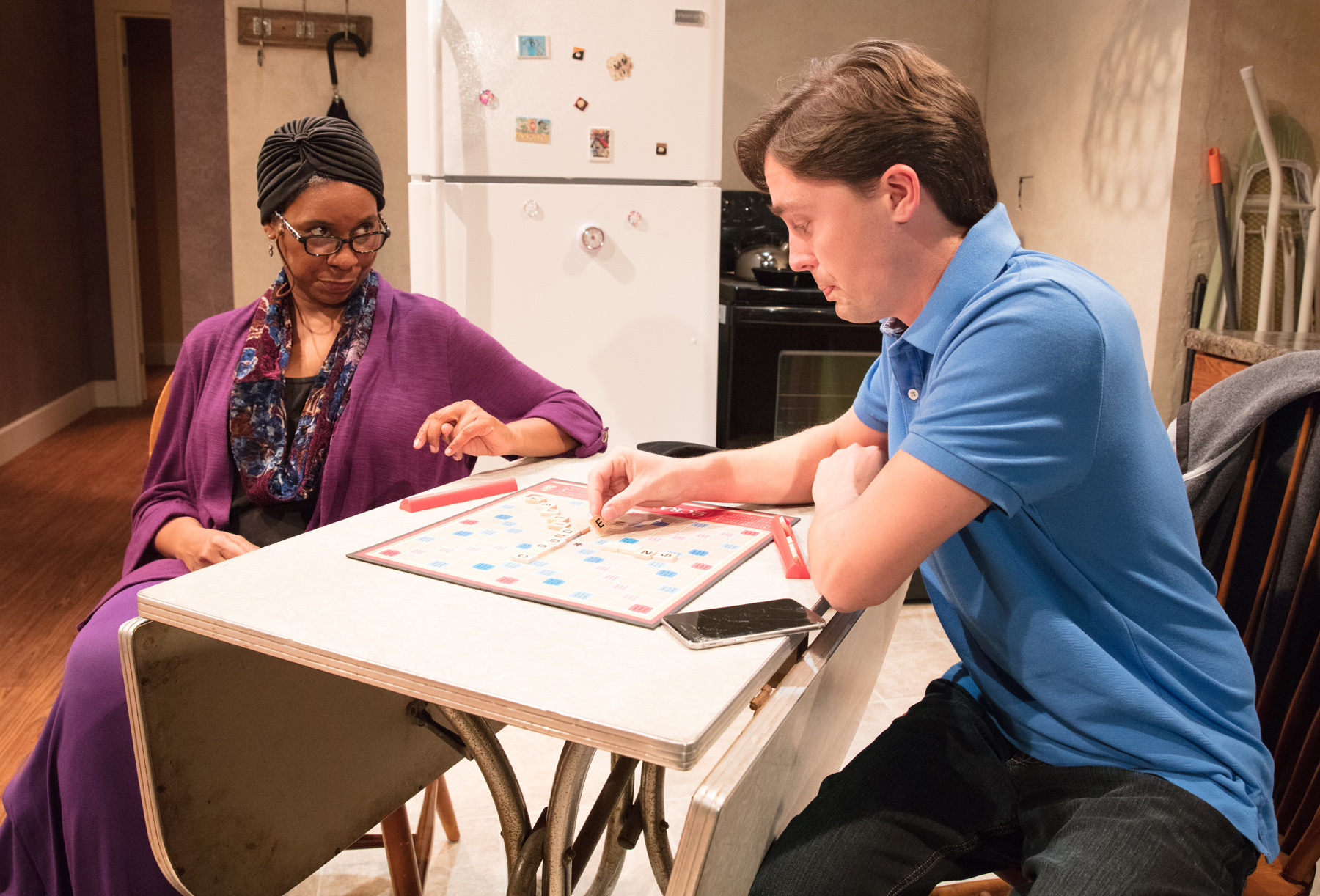 Here I sit, a white liberal theatre critic, writing a review about a world premiere play in which a white liberal actor finds himself in the very uncomfortable position of having to say the N-word onstage in a world premiere play. It’s a role that Eddy (Ryan Smetana) firmly believes could launch his career, but when the playwright adds that word to the script, he is horrified. As a young man who considers himself “woke” and whose best friend (Reginald Hemphill in a role that is so small it seems to be an afterthought) is black, he is well aware of how hurtful that word is. But the role! It’s a one-man adaptation of Oedipus Rex, a showcase role if ever there was one. How can he not do it? But how can he do it?

There are many more factors that complicate N, a new play by David Alex, beyond its young actor’s dilemma. This is a play that reaches for a lot. It wants to be nothing less than a contemplation of the moral righteousness of conservative thinking, a condemnation of skin-deep liberalism, and a commentary on the treatment of the elderly, among other things. That it is not completely successful in its complex arguments is not really surprising; what is surprising is that a play with this kind of depth at its core should choose fairly facile means of exploring its messages.

N centers as much on Mrs. Page (Stacie Doublin), a septuagenarian Black woman in whose home Eddy resides, as it does on Eddy himself. Though she is a fiercely independent woman, her unseen son is concerned about her welfare and hires the actor to live with her as a caretaker. Though it builds Eddy’s liberal cred (another Black friend!), throwing these two people together seems a bit of a contrivance, meant more to propel the plot than to make much sense. (Why hire an actor as a caretaker for an elderly mother? Wouldn’t a nurse be a more logical choice if you are worried about her? How does Eddy even know what to do?)

In a character twist that is either brilliant or hopelessly artificial, Mrs. Page happens to be a militantly conservative woman. (She even campaigned for Goldwater—after he voted against the Civil Rights Act—causing a rift within her family and community.) A strict Constitutionalist, she believes that nothing the Founding Fathers did not put in writing is valid. (The built-in conflict between that belief system and her anger at Eddy for using that word, which she ought to recognize as an abrogation of freedom of speech, is not brought up.) But Mrs. Page firmly believes she has the moral and political high ground. “Conservatives know they are conservative,” she tells Eddy. “Liberals think they are liberal.”

The fact that this absolutist argument assumes a purity of belief that is practically superhuman also never comes up, but the statement underscores much of what Alex is doing here: highlighting the idea that liberals are not as “woke” as they might think they are. Yet when it comes time to test that theory through Eddy’s actions, the playwright goes for the easy solution: he gets Eddy drunk (completely against everything we have seen of him) and beaten up by a group of Black men at a bar, and then has his good friend turn on him, after which his ideological compass goes on the fritz. Another issue that Alex conveniently ignores is the current occupant of the White House and the state of politics in this country today. (Having Mrs. Page either support Trump or argue against him would necessitate a shift in her own ideological purism.)

Doublin and Smetana are strong in their respective roles, and director TaRon Patton does everything she can to keep the play moving as she helps them establish character (though an excessive number of costume changes and at least one moment of seriously overused dramatic expressionism slow things down a lot). Still, the actors do everything within their power to make sure that the play’s tensions derive from within the people they are playing, even if at times the conflict seems a bit imposed. Even the big will he or won’t he? moment feels a bit wishy-washy. (Though perhaps it is handled in the only way possible, it requires a bit of theatricality that feels as out of place as that one moment of expressionism did earlier.)

While N does not work as well as it might, it would be unfair to say that Alex has struck out here. It’s more a deep foul fly ball: he takes a mighty swing but just does not fully connect. In the end, I thought that this play got bogged down in political partisanship and missed its opportunity to fully explore its other issues.

N is now playing at Greenhouse Theater Center, 2257 N. Lincoln, Chicago, through Nov 17. Showtime is 90 minutes with no intermission. Check the website for specific dates, times, and tickets. Find more information about current plays in our front page recs and at theatreinchicago.com.