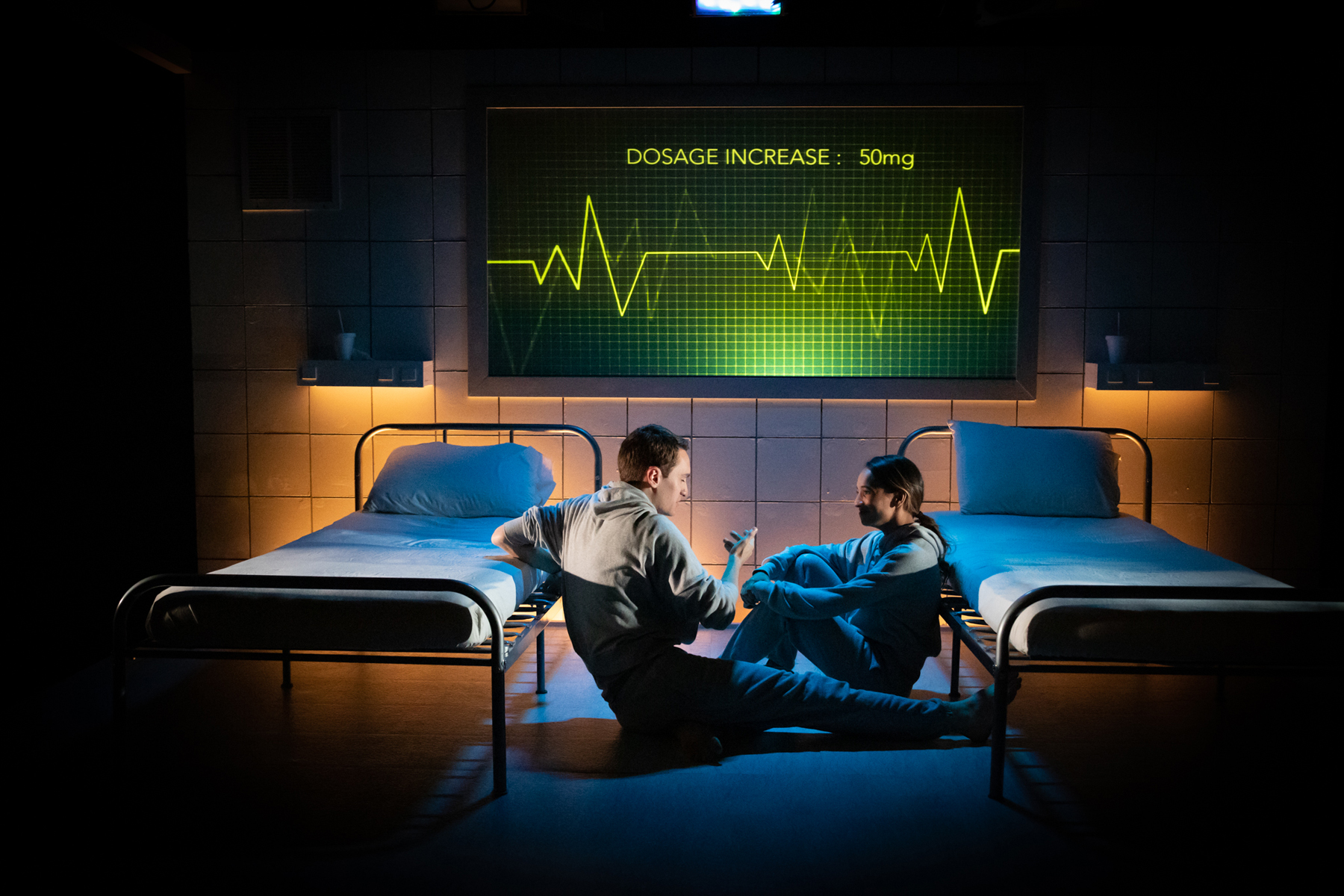 Emotions are complicated things. We all experience happiness, joy, anger, hatred, fear, love, and so many other powerful feelings that are part of human existence. But what are they, really? Where do they come from? We know that attraction, for example, comes from pheromones; is that all love is? An interplay of chemical reactions in the brain? Lucy Prebble’s The Effect, now playing in a powerful and (yes) emotional production at Strawdog Theatre, asks us to explore what we know and what we don’t know about emotions, especially love.

Elly Green directs this fascinating play set in the sterile environment of a controlled drug testing facility where psychopharmacologist Dr. Toby Sealey (Cary Shoda) is trying out a new antidepressant aided by psychiatrist Dr. Lorna James (Justine C. Turner) with a group of volunteers. There are apparently many of them involved in the four-week, live-in trial, but the only two we meet are Tristan (Sam Hubbard) and Connie (Daniella Pereira). Both are there, of course, because they need the money, but their backgrounds are quite different. Tristan, in his late 20s, is a somewhat cocky, self-assured man who has made a kind of career out of these drug trials. Connie, on the other hand, is a psychology student who is only doing this while her older boyfriend is traveling with his son.

As the two young people begin to develop feelings for each other that they cannot seem to control, Lorna becomes concerned not only with the negative effect this might have on the trial but on the potentially harmful effects such a drug-induced emotional connection might have on the couple and their lives. She is completely convinced that anything that chemicals can do to the brain is not real, and that the whole psychopharmacology era has been a huge mistake that we will eventually realize and need to fix. The reason she has taken on this job at all is that her own depression (for which she, of course, refuses to take drugs) has not allowed her to continue her practice, and her old boyfriend Toby offered her the position.

Green does a wonderful job here of essentially telling several stories at once on Yeaji Kim’s well-designed clinical set where, very often, characters are in the midst of some emotional reaction upstage while a totally different scene is playing downstage. She is especially good at showing the two test subjects in the throes of their possibly drug-induced passion through a series of brief, highly physical moments punctuated by blackouts. (Lighting design by Claire Chrzan and John Kelly helps to focus our attention in these moments, while Isaac Mandel’s sound design enhances the hospital-like setting.)

The actors, too, do a fine job, though the men are not called upon to reveal as much as the women. Hubbard and Pereira make a convincing flirtatious couple with Hubbard’s confident Tristan breaking down both Connie’s inhibitions and her connection to the missing boyfriend. Meanwhile, Pereira shows a ton of range as her character undergoes a wide variety of powerful emotional experiences throughout the play. Similarly, while Shoda’s Toby feels every bit the power player in charge of this trial as well as the compassionate ex-lover who blames his breaking up with Lorna for her difficulties, Turner is faced with a slowly devolving character succumbing to a depression she refuses to treat.

The Effect asks far more questions than it answers, but that’s the whole point. How can we know if the drugs we are taking are helping or merely putting off pain? If we fill our brains with chemicals, how can we ever trust our emotions to be real? Or can love be real simply because we feel it, no matter what may have influenced or engendered it? Even if it is a side effect of a pill taken to help combat depression? (Prebble makes the point that what we usually refer to as “side effects” are actually effects of the drug that the manufacturer did not intend.) Kim’s projections invite us into the trial to wonder these things, as if we too are parts of the “experiment” we are witnessing, and we are left immersed in a world where science and medicine, more and more, alter our mental states so that we can’t really be sure what is real and what is not. As more and more people take more and more drugs for more and more reasons, this play wants us to stop and consider why we do it…and maybe just to stop.

The Effect is now playing at Strawdog Theatre, 1802 W. Berenice, Chicago, through Nov 23. Showtime is 2 hours with one intermission. Check the website for specific dates, times, and tickets. Find more information about current plays in our front page recs and at theatreinchicago.com.