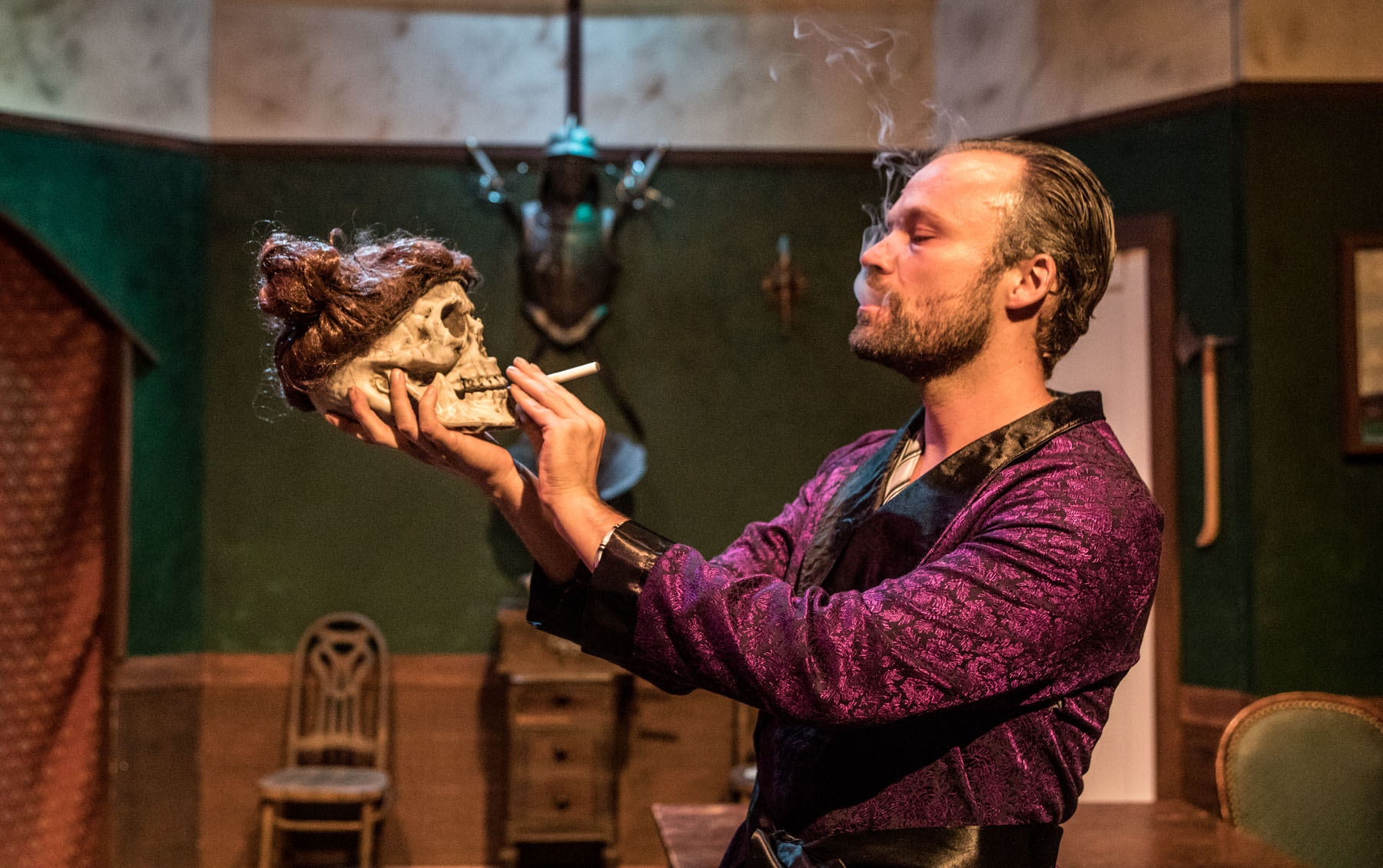 Let’s get one thing clear from the start: despite its thrillerish title, Nightmares and Nightcaps: The Stories of John Collier, now playing at the Athenaeum in a Black Button Eyes production, is absolutely hilarious. Collier was a British expatriate author of poems, stories, screenplays and novels, most of which dealt with bizarre or fantastic circumstances treated in a comic style. Director Ed Rutherford’s adaptation of several of these stories captures both their darkness and their humor in a short (75 minutes) evening of highly engaging theatre.

The show is narrated by a man known as The Dweller (Kevin Webb), seemingly a stand-in for Collier himself. Webb is wonderful as the master of ceremonies taking us through a series of unusual, Twilight Zone-ish tales and equally strong when taking part in them, as he does in Collier’s classic “The Chaser,” a story about a young man seeking to buy a love potion and “Are You Too Late, or Am I Too Early?” a story about a recluse who suspects his apartment is haunted. But as good as Webb is, the ensemble of this production, asked to play multiple roles through many stories, is just as strong. Among the standout moments: Ellen DeSitter as Squirrel, a young man so obsessed by his love for a huntress that he seeks to get himself stuffed so he can become one of her trophies and be with her, and Megan DeLay as the huntress; Maiko Terazawa and Joshua Cervantez as a couple so in love with each other that they cannot bear the thought of the other dying and decide to spend 9/10 of their income on insurance; Shane Roberie and Caitlin Jackson as a couple who differ greatly on how to spend an inheritance; Kat Evans in multiple roles including the best Bird of Paradise you could want to see; and Cervantez and Lee Wichman as a screenwriter and the devil he accidentally sells his soul to. Rutherford stages this collection with aplomb, easily moving from one story to another even though Collier’s stories tend to have abrupt endings. He is aided by a strong design team including Jeremiah Barr, who designed the set as well as some great puppets, and Liz Cooper, whose lighting design is impeccable, especially in “Pictures in the Fire,” where hell is conjured by a combination of wonderful illumination and brilliant sound design by Robert Hornbostel.

Collier’s short stories have been adapted before as TV films and as episodes of “Twilight Zone” and similar shows, but this play lovingly recreates several of them in a new medium and takes advantage of the immediacy of live theatre to bring them to vivid, often very funny life. And when Collier is serious, as he is at times, such as in “Thus I Refute Beezly,” a tale about a father (Wichman) who cannot abide the apparent tall tales of his son (DeSitter), Rutherford et. al. capture the dark twists perfectly. This is an excellent production by some talented performers, so good that you’ll leave the theatre wishing they could have added more of Collier’s sardonic, twisted confections. But you’ll be very entertained by the ones they have included: this original show easily adds to Black Button Eyes’ growing reputation as one of the finest adapters of literature in Chicago.

Nightmares and Nightcaps: The Stories of John Collier is a Black Button Eyes production now playing at the Athenaeum Theatre, 2936 N Southport, Chicago, until September 15. Performance times vary; check the website at Athenaeum Theatre for schedule of locations and times. Find more information about current plays on our Current Shows page and at theatreinchicago.com.