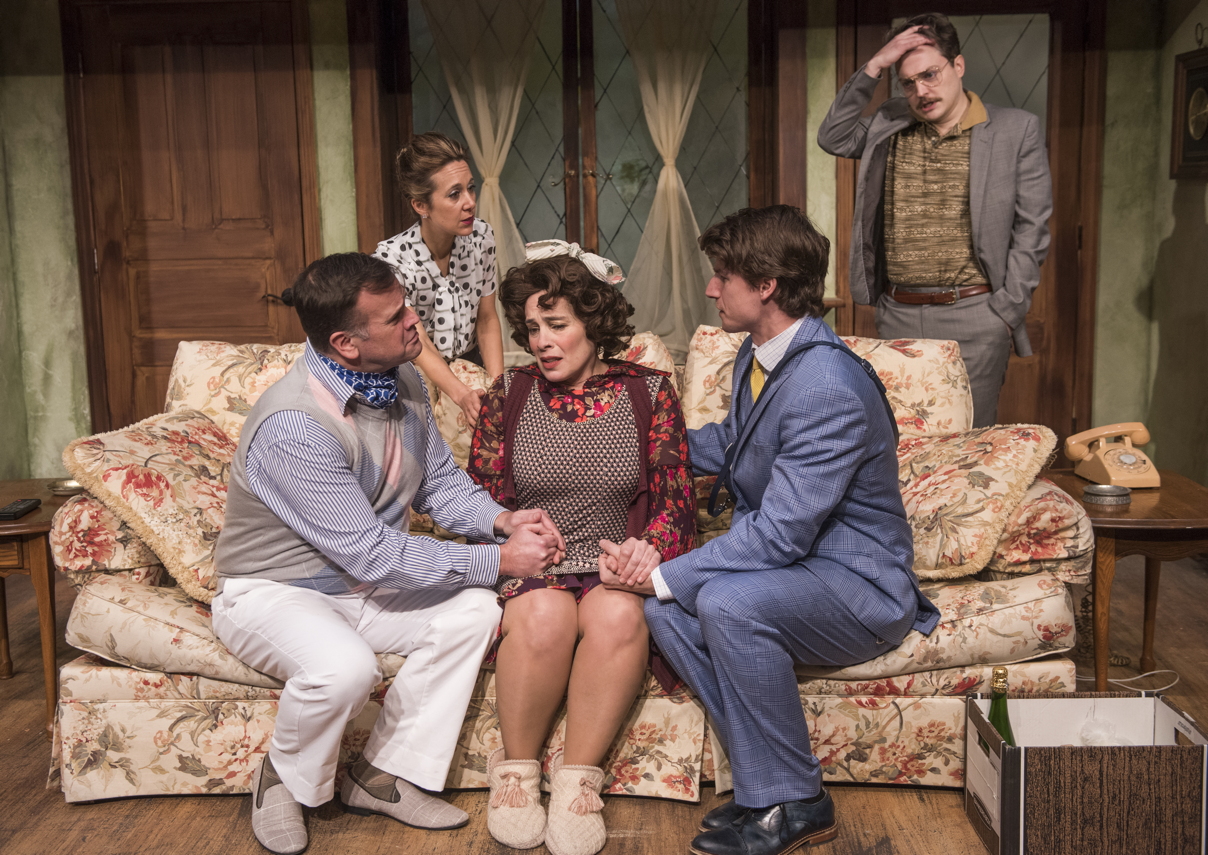 Since it was written in 1982, Michael Frayn’s Noises Off can arguably be said to set the modern theatrical standard for farce. This play-within-a-play follows a (fairly inept) theatre troupe as it presents its latest touring show, Nothing On. You don’t need to be a theatre aficionado to find the whole thing uproariously funny. Windy City Playhouse, which made a name for itself as a sort of pioneer of immersive theatre in Chicago with its Southern Gothic (now playing at a separate venue in the south loop), naturally adds its own touches to the proceedings. Traditionally, in Act Two, the set revolves to show the audience what is happening backstage. In WCP’s version the set doesn’t move; the audience does. Act Two finds the audience quite literally backstage, utterly immersed in the insane goings-on of a play and a troupe coming apart at the seams.

Director Scott Weinstein and his actors and designers have a whale of a time with this more than silly show. Act One introduces us to the company of Nothing On, a farce that, according to its director, Lloyd (Mike Tepeli), is all about “doors and sardines”; that is, moving plates of sardines through the many doors of the Jeffrey D. Kmiec’s set. (He’s being over-simplistic, of course, but farces often do come down to just that: timing of movement in and out of doors.) Act One finds the play in its final rehearsal, with patron and actor Dotty (Amy J. Carle) still unable to remember the pattern of movement: when does she take and when does she leave the sardines? Lloyd’s frustration is barely hidden as he corrects her again and again, and then we meet the rest of the cast-within-a-cast and its complex inter-relationships.

Gary (Ryan McBride), a dolt who can hardly finish unscripted sentences, is having an affair with Dotty. Lloyd is having simultaneous affairs with Brooke (Rochelle Thieren), a vacuous bimbo whose chief (only?) asset in Nothing On is that she looks great in her underwear, which is her costume for most of the show, and Poppy (Erica Bittner), the production’s sweet assistant stage manager. Belinda (Amy Rubenstein) is sweet on Freddy (Scott Duff), whose wife has just left him. The only two players who are not entwined in offstage relationships are Tim (Alexander Quiñones), the company’s stage manager and general understudy, and Selsdon (Will Casey), an alcoholic older actor who plays a thief.

Don’t worry: the structure of the play will make everything extremely clear. Act One introduces us to the first act of Nothing On, what is supposed to occur onstage, and the players. Act Two, taking place on opening night of part of their run, whisks us backstage to watch as their interpersonal connections boil over into real animosity. Act Three shows us the same act weeks later, deep into their tour, when things have broken down so badly among them that they just don’t care anymore.

Weinstein’s change to a moving audience for Act Two means we miss the fascination of the set actually turning around, but that is more than made up in the intimacy of the act. We are right backstage with the actors as they engage in all sorts of infighting: Gary is convinced that Dotty is having an affair with Freddy and wants to kill him. Dotty, meanwhile, is thoroughly angry at Gary, to the point of almost refusing to go on. And then Lloyd shows up, creating tension between Poppy and Brooke. All of the backstage antics, of course, are done silently, but they are all the funnier for the fact that they can’t talk as they try to undermine each other (or flat out kill each other) and yet keep the show going. Act Two requires some meticulous blocking and character development, and Weinstein has taken great pains to achieve both, and outstanding sound design by Brandon Reed creates the illusion that we are really with them as an act plays before an invisible “audience.”

The cast could not be better. As the utterly inept actress Brooke, Thieren saws her arms and yells her lines and can’t change a thing once it is set in stone (which becomes more and more comic in Act Three when everything falls apart). McBride’s Gary is a wonderful creation as well: the exact opposite of Brooke, he is a fairly natural actor (for a farce) until things break down and he has to improvise, and then his inability to complete his own sentences throws everything into more chaos. Freddy is also a joy: Duff has a ton of fun with his complementary aversions to violence and blood. Rubenstein’s Belinda desperately tries to hold things together, but as Freddy becomes more and more the target of Gary’s anger in Act Two, even she starts adding to the anarchy. Casey gets plenty of laughs as a man who needs drink so much he hides bottles all over the place. Quiñones has several wonderfully humorous moments, and Bittner, as the innocent love-wounded Poppy, is very funny in her own right.

Make no mistake: you will laugh and laugh a lot at Noises Off, and the close-up view in Act Two, when you are simply part of the backstage itself, is one of the great extended bits in farcical theatre. Coming off its triumph in Southern Gothic, Windy City Playhouse appears to have yet another hit on its hands.

Noises Off is now playing at Windy City Playhouse, 3014 W. Irving Park, Chicago until Mar 31. Check the website for specific dates, times, and tickets. Find more information about current plays in our front page recs and at theatreinchicago.com.