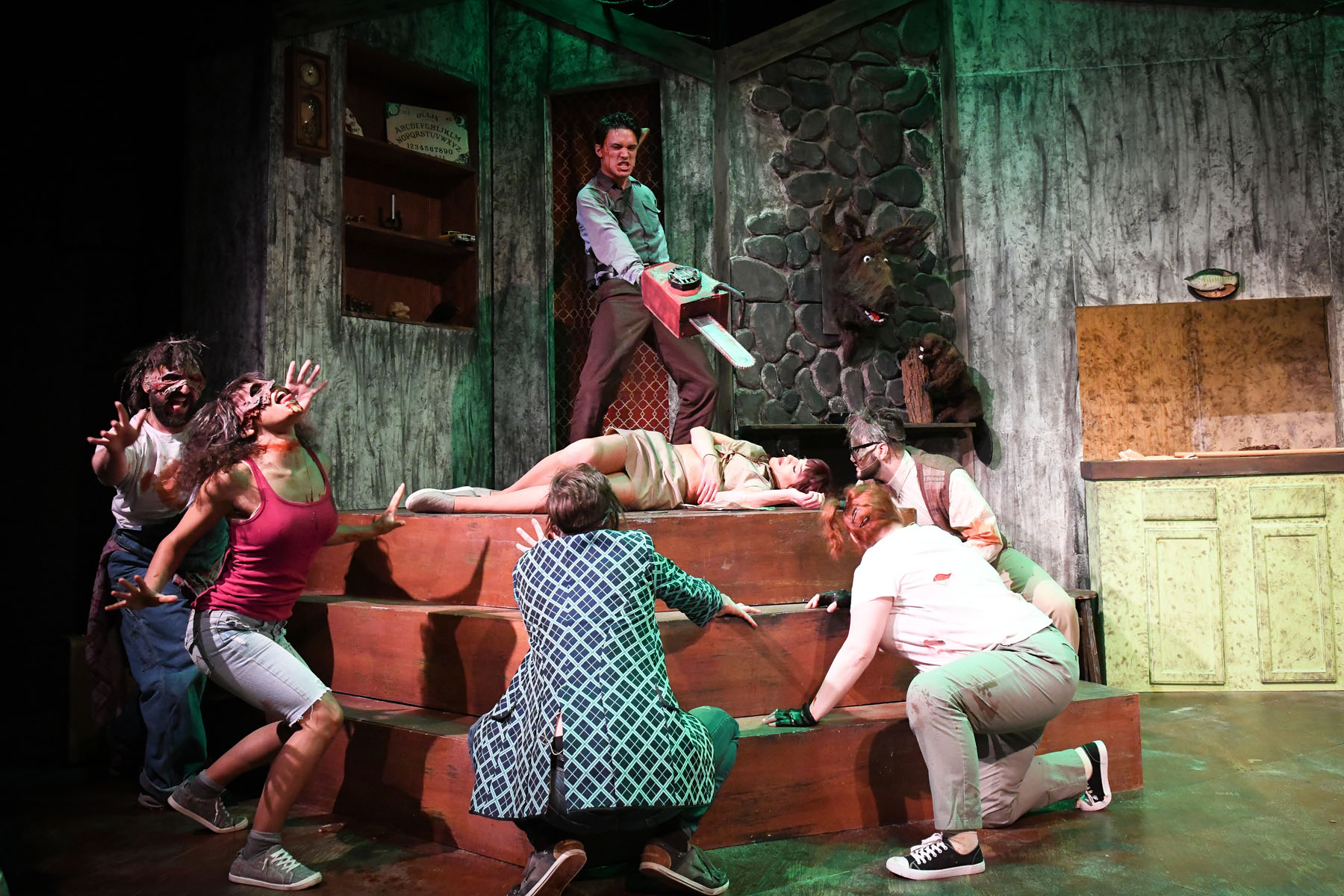 Sam Raimi’s 1981 cult film The Evil Dead is usually credited with starting the horror/zombie film genre, and it made a name for Raimi and for its star, Bruce Campbell. Because of the often awkward dialogue and over-the-top gore and performances, it is often also credited with beginning the horror/comedy sub-genre, but Campbell says that this is a misconstruing of the film’s intentions.

“The mindset was to play it straight,” Campbell said in a 2018 tweet. But he acknowledged that the nature of the film drew laughter from those audience members who were not too scared to find the humor.

There is no such confusion in Evil Dead: The Musical, now playing at Pride Arts Center in a Black Button Eyes production. Oh, the gore is there (audiences are given ponchos for the “splatter zone”) and pretty much everybody dies, as in the original, but this 2003 play is most definitely intended for laughs. And this production delivers: with campy lines and situations, stylized performances, gushers of blood, and (of course) a chainsaw, Evil Dead: The Musical is one of the silliest, bloodiest, most wonderfully excessive shows you could want to see. If you’re a fan of the film, like my daughter (whom I took with me), you’ll love it for all of the callbacks it has to the films in the Evil Dead series and for what she thought of as a pretty perfect recapturing of their often ludicrous moments. (The attack of one character by a group of trees comes to mind.) If, like me, you are somehow unfamiliar with the cult classic, you’ll love it because it will make you laugh and because it contains many catchy tunes and dance sequences.

The plot is Horror Film 101: a group of five college students decides to take a vacation at a small, secluded cabin in the woods. There they discover an ancient text that, when read aloud, conjures evil Candarian demons who are determined to kill them and take over their bodies. Of course the book’s incantation is read aloud. And, practically from the start, the demons begin to inhabit the friends one by one, eventually leaving Ash (Jordan Dell Harris in a brilliantly over-the-top performance) alone to try to send them back to the depths of whatever hell they came from.

Director Ed Rutherford had lots of fun envisioning absurd moments and bringing them to life, and his actors are having so much fun you sort of wish they wouldn’t die at all, though you know they will. (That’s a weird statement that only makes sense in connection with a horror comedy.) The original five students include Ash, his sister Cheryl (Caitlin Jackson, who has more fun than anyone in the part of the first victim and first demon), his S-Mart colleague and girlfriend Linda (Kirby Gibson), his brother Scott, who is pretty detestable (Josh Kemper), and the girl he picked up for the weekend, Shelly (Stevie Love). As the insanity mounts in the cabin and their escape route is cut off, the five slowly wend toward their fates.

Meanwhile, another small group is making its way to the cabin. Annie, the daughter of the cabin’s owner (Love again, having tremendous fun in the double role), her fiancé Ed (Robert Quintanilla), and a local named Jake played by Shane Roberie, are on their way…despite the collapse of the bridge leading to the cabin. Apparently Jake knows a back way (and somehow the trees don’t attack them; don’t ask for this to make sense). Of course, they are all just more fodder for the demons. (David Lipschutz also appears in an ominous robe to set scenes.)

With songs like “All the Men in My Life Keep Getting Killed by Candarian Demons,” the music (directed by Oliver Townsend) is just as much fun as the rest of the show, which is also stuffed with in-jokes like the constant refrain of “dead by dawn” (the second film’s title) and one character reading a book by Campbell. You truly don’t need to be a horror fan to love this show; I’m living proof. This has to be the only show in the world with a “Gore Consultant,” and that too is just a silly title. (It’s not really gory, just highly comical.) I probably would not have seen this one if it were not for my daughter, but I’m glad I did. From start to finish it is one of the most bizarre things I’ve ever seen, and that is tremendous praise. Don’t be put off by the horror associations (or even the splatter zone); this one is something you ought to see. I don’t know if Candarian demons can kill with laughter, but this play certainly tries hard enough. And now that winter is really here we need all the laughter and escapism we can get.