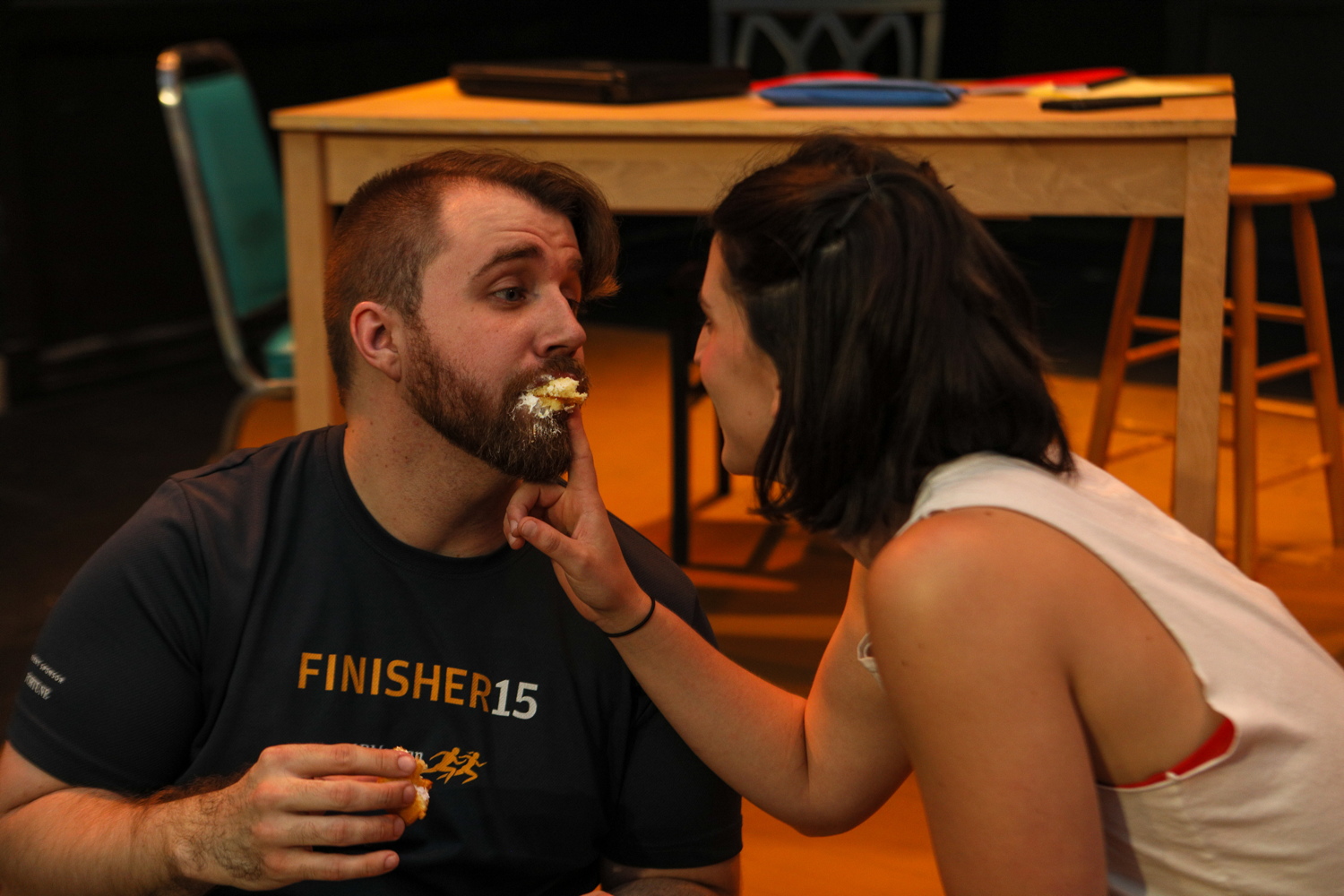 Jillian Leff’s (Non)Fiction, now playing in a world premiere by the Right Brain Project, is one of those intense little black box gems that so often seem to arrive under the radar at Chicago’s neighborhood theatres. Presented on a plain, generic set and directed by Kathi Kaity, the play revolves around a simple, direct question: who is the owner of a story, the person who wrote it or the person whose life it was based on? Do the months or years of creative toil that goes into writing a book or a play negate the right of a subject to his own life story? Does the fact that a story is based on someone else’s experiences mean you have no right to tell it? Leff is obviously fascinated by this issue, and her powerful and provocative play frames this conundrum for us in a unique and compelling way that also explores the deep and profound connection that an artist has with her creation.

Stephanie (Madeline Bernhardt) is an aspiring writer who has published a few short stories and is currently at work on her first novel. She lives with her boyfriend Mike (Justin Verstraete), an accountant who takes care of the bills so she can write unhindered. The couple is very much in love; in fact, Bernhardt and Verstraete (under Kaity’s direction) portray that playful, youthful kind of newly-created relationship almost as perfectly as one can imagine it being played. Every movement they make, every glint in their eyes, every undertone in their voices has a purpose and speaks of the flirtatious, sometimes impish nature of two young people who have made a strong connection.

These are very carefully crafted and nuanced performances, but from the beginning it is clear that the love and joy we see is about to get rocky. Leff’s first scene, from which the entire play is a flashback, shows us Stephanie and her somewhat overbearing agent Dan (the golden-voiced Tim Lee) preparing to celebrate the publishing of her book…notably without Mike. Though Stephanie makes an excuse for his absence, it is obvious that he has chosen not to attend because something has gone seriously wrong in their lives, and it’s easy to infer that it has something to do with the novel.

As we begin to see scenes that start a year and a half earlier when Stephanie is first working on her book, we learn that, despite Mike’s desire to read it, she is unwilling to share anything but a perfect final draft of a novel she is calling “Memoirs.” He expresses again and again a desire to help, but she tells him he has helped already “more than you know.” Audience members who are paying attention (and who recall the cryptic title of the play) can readily deduce that she is writing about him and his life story.

That story is indeed a captivating one. In snippets of conversation, we learn that Mike and his cousin Emma (Christiana Barbatelli, who gives a powerful and layered performance) share a long-term, harrowing, and abusive past from which they have managed to escape. Even now, it terrifies them to discuss it for reasons they keep to themselves; we only know that it has something to do with their parents. Stephanie, on the other hand, has gleaned more of the truth and realizes that a fictionalized account of it would make a remarkable and memorable plot for a book and that a character based on her boyfriend would be a very powerful one. She plans to surprise him with the finished novel as a way to honor the struggles he has overcome in his life, but the dangerous secrets that Mike and Emma have kept from her are still, unknown to her, terrifyingly real and, if publicly revealed even in an oblique way, could imperil their lives.

At its core, (Non)Fiction is a love story. Stephanie is torn between the twin loves of her life, Mike and her passion for writing, which have become indelibly at odds with each other. She has dedicated her existence to both of them, spending her time shifting between hours spent trying to write and rewrite her book and hours spent in the spirited, loving relationship she has built with her boyfriend. They are the two pillars of her life, both of which make her the person she is. What does one do if she is forced to choose between two aspects of her own heart? How do you make a decision when every choice is wrong? These are not questions that Leff chooses to answer, but ones she leaves with the audience to ponder as they filter out of the theatre, realizing that once again a tiny, underfunded Chicago theatre company has left them emotionally drained. If you are the kind of theatre-goer who sticks with the big houses, you owe it to yourself to discover the powerful experiences that the small, unheralded companies can create on practically no budget. (Non)Fiction is a reminder of the joy of raw, honest acting, and it is well worth seeing.

(Non)Fiction is a Right Brain Project production now playing at the Athenaeum Theatre, 2963 N. Southport, Chicago through Sep 14. Check the website for specific dates, times, and tickets. Find more information about current plays in our front page recs and at theatreinchicago.com.