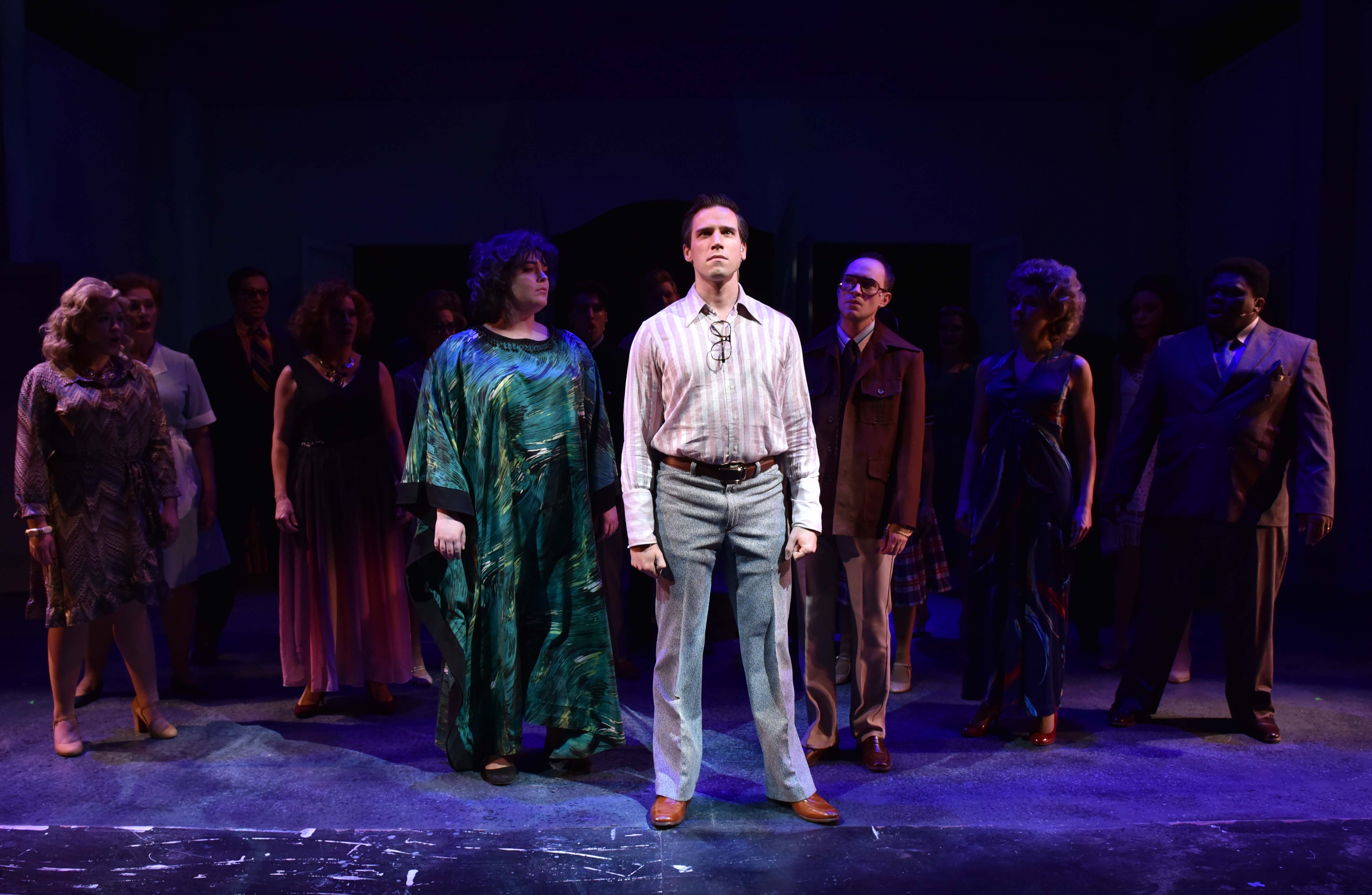 Since Stephen Sondheim is generally viewed as one of the great Broadway composers of all time, with shows as popular and well-regarded as Company, Sunday In the Park With George, A Little Night Music, Follies, and Into the Woods, it is often fascinating to examine one of his shows that was a certifiable flop, for even they are often great examples of what a musical can be. One such show is Merrily We Roll Along. The first show Sondheim composed after the brilliant Sweeney Todd, Merrily ran only sixteen nights on Broadway in 1982. It was enough to receive a Tony Nomination for Best Score, but the show seemed destined to fade into obscurity until a 1994 re-written revival rekindled interest in it. Still not considered one of the composer’s best shows, the musical, as it does in Porchlight Music Theatre’s current stellar production, is still capable of providing its audience with a glorious evening at the theatre.

That’s the thing about Sondheim: even when he’s not at the top of his game he is still so gifted a composer and lyricist that his shows can’t help entertaining. And the truth is that there is much to love about this musical. The story begins with the main character, composer Franklin Shepard, celebrating a huge career success but a couple of personal disasters: during the first scene, he loses both his best friend and his wife to his own selfishness. From there, we wander slowly backward in time over the previous twenty years to watch that friendship (which was originally a triad) form, careers and relationships change, and the frustrating success of Franklin’s middle age slip back into the eager potential of his youth. The show’s first act, which sets up all of the conflicts that govern his life, is less interesting than the second, which shows us the irrepressible enthusiasm of three friends becoming who they want to become. Still, that first act has several highlights. Chief among them is former best friend and partner Charley Kringas (Matt Crowle) taking Franklin (Jim Deselm) to task on live television for being a sellout to Hollywood’s promises of riches and fame instead of remaining true to their earlier visions of Broadway artistry (“Franklin Shepard, Inc.”). Crowle’s attack on this song is so caustic and wonderful that he immediately establishes all of the elements of his character, from his sarcastic wit to his artist’s mind to the failed dreams of his life that have made him bitter. Though Franklin is the show’s main character, Crowle’s Charley is easily its most impressive creation. The Ken-doll handsome DeSelm does a creditable job with Franklin, but never quite uncovers all of the depth that is possible even within a character as shallow as this one. Mary (Neala Barron), the third member of the “Old Friends” and their emotional center, is outstanding as a woman whose unrequited love for her best friend finally drives a wedge between them. Because the play is told backward, and we learn of that love near the end of their friendship, we get to watch as Barron shows how that love blossomed and how, again and again, Franklin remains oblivious to it. A fourth “friend,” Beth (Aja Wiltshire) is also introduced in Act One, as she is getting a contentious divorce from Franklin. Again, because of the play’s structure, every element of Wiltshire’s performance, even her joyous Act Two moments that reflect growing and girlish excitement, are colored by the pathos of her more reflective first act song, “Not a Day Goes By.” Act Two, which shows these doomed friends as they slowly move backward to their first meetings, is by far the stronger act. From the exuberance of discovering that audiences love their first show (“It’s a Hit”) to the pure silliness of their cabaret act, in which Beth, Charley and Franklin perform a hilarious tribute to the new First Family called “Bobby and Jackie and Jack,” we watch as the sullenness of middle age and loss is replaced by the enthusiasm of youth. Even the reprise of “Not a Day Goes By” reflects this buoyant hope:

As the days go by,
I keep thinking, “When does it end?”
That it can’t get much better much longer.
But it only gets better and stronger
And deeper and nearer
And simpler and freer
And richer and clearer

What a difference from the first act, when the lyrics were:

I keep thinking when will it end?
Where’s the day I’ll have started forgetting?
But I just go on thinking and sweating
And cursing and crying
And turning and reaching
And waking and dying.

Wiltshire delivers both ends of this homage to relationships with perfection and powerful emotion. Act Two also contains one of the most autobiographical songs Sondheim ever wrote, “Opening Doors,” in which the three main friends (still moving backward through their early careers) try to sell Franklin’s music, Charley’s one-act play, and Mary’s novel to agents and publishers. It is a perfectly wonderful montage of what artists in the late 50s faced, and what they still face today. In addition to the main characters, the entire cast of this production is excellent, but I must also mention Keely Vasquez’s Gussie and David Fiorello’s Joe Josephson. Both actors take stereotypical roles and handle them beautifully. It would have been easy for either actor to treat the role as a one-note creation, but both lend their characters considerable life.

Michael Weber directed the show on Jeffrey D. Kmiec and Greg Pinsoneault’s minimalist set full of doors (to open), roll-in scenery and multiple projections by Anthony Churchill, lighting by Denise Karczewski, and sound by Robert Hornbostel. Weber does an admirable job with the pacing of this musical that depends so much on its pacing as time slips away into the past. Bill Morey’s costumes help easily establish the periods we visit here, and Aaron Benham’s seven-piece orchestra sounds like a much larger one, filling the house with Sondheim’s gifted compositions.

Merrily We Roll Along is not the very best Sondheim show you can ever see, but the Porchlight’s production is easily among the best you’ll find. It is a play filled with humor and pathos and beautiful music. It’s well worth seeing.