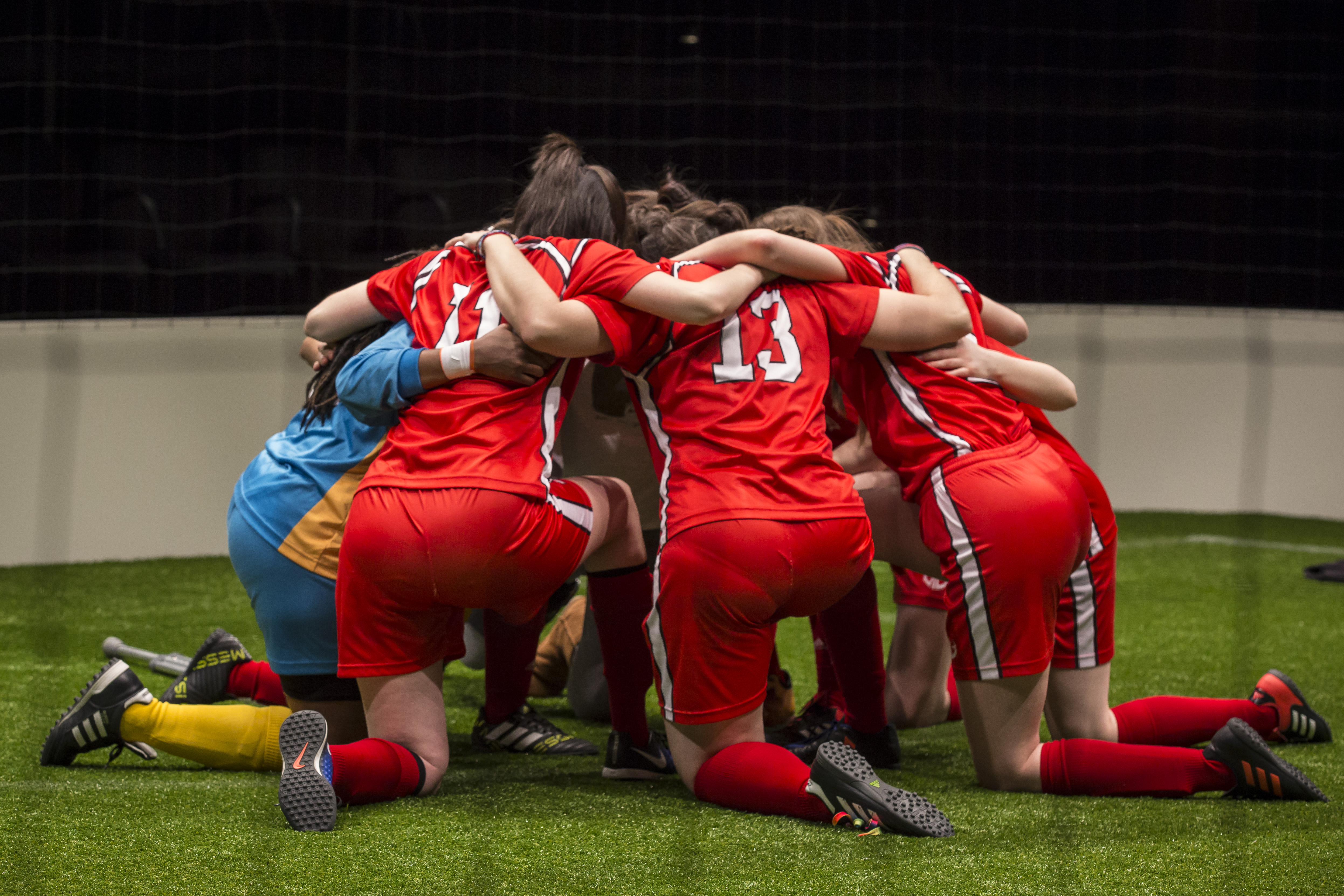 A high school indoor soccer team is warming up, doing various exercises and stretches. Several girls are having a serious conversation about the Khmer Rouge; several others are debating the use of tampons vs. pads for athletic endeavors. The new girl doesn’t seem to fit into any conversation, and the team captain, all business, wants them to concentrate on the game. This is the opening of the Goodman Theatre’s new play The Wolves, a glimpse into the lives of teenage girls through the medium of a soccer team trying to win its league championship. Sarah DeLappe’s Pulitzer finalist play takes its audience back to what we all think of as a simpler time in our lives, but which, as she shows, is rife with complications. There is much more than scoring goals and taking tests on these girls’ minds as they navigate a mental landscape that includes concerns about sex, college, injuries, and even death. As performed by a troupe of young actresses who are mostly new to the Goodman’s stage, The Wolves uncovers the most raw details of young lives, when emotions are heightened and everything is the most important thing in the world. Directed by Vanessa Stalling, the play takes place on a perfect set by Collette Pollard that is designed to look like a warm-up area in an indoor soccer facility. Stalling keeps the action moving, as befits a play about athletes, using soccer drills and other devices to move the players around. As they warm up and converse, we learn about their disparate personalities and concerns. #2 (Taylor Blim), the girl who doesn’t understand tampons, is an innocent who thinks she can solve the world’s problems by knitting scarves. She also has what appears to be a secret eating disorder; she binges on the team’s oranges as if she’s never seen one before. #7 (Natalie Joyce), a striker with a very foul mouth who doesn’t care who she might hurt with it, is as much focused on her college-aged boyfriend and the sex they are having as she is on the team. Her best friend, #14 (Aurora Real de Asua), feels left behind by 7’s escapades and is trying to fit in. #00 (Angela Alise), the goalie, gets so nervous before games that she vomits. #8 (Cydney Moody) is a typical schoolgirl focused on fantasy literature, classes, and her hoped-for trip to Nationals so she can go to Disney World. #25 (Isa Arciniegas), the captain, wants nothing more than for the team to succeed, but at the same time she is trying to convince them that an outside girl at the school is actually “interesting.” #11 (Sara Price) is the one who is concerned about world affairs, leading the discussion of the Khmer Rouge leader who, at 90, has just been captured. #13 (Mary Tilden) is quick to make a joke out of anything that goes on. And #46 (Erin O’Shea) has just moved to town and joined a team that has been together for ages. She lives in a yurt (which the girls on the team mispronounce as “yogurt”) with her eccentric mother and has lived in more countries than the rest of the girls can even name. As we spend time with these girls, we learn that, though they are often as shallow and ignorant about world affairs as might be the stereotype of suburban teens, they also show powerful empathy and more intelligence than we might expect.

Though it takes place entirely on the soccer field, this is not merely a play about a game. Sure, they care whether their team wins its (offstage) matches, but what this play focuses on is the dynamic of their relationships with their work and each other. The caustic #7, for example, seems for most of the play to be interested only in herself, but an injury forces her to think about the team and the other girls, and a tragedy brings them all together. But whether they are dealing with real world problems or first world problems, we see a group that, through their various filters, each wants to find a pathway through to the frightening future represented by college scouts and parental worries. The play takes us into a world most of us left behind a long time ago and into the mindset of teenagers on the cusp of adulthood facing issues that teens have to face whether they are about the exploration of sex, sexual orientation, hygiene, friendship, or dealing with the sudden onset of a real tragedy in their midst. Too often adults, with problems of their own, belittle the struggles of teens as trite or simplistic; after all, they think, we know that these are but the problems of a moment and they will outgrow them. But what adults tend to forget is how very real all of this is to the teens in question, who have less life experience to mitigate it. It’s all life and death to them, and when real disaster strikes they are ill-equipped to handle it. Meighan Gerachis, as a soccer mom, has a brief turn to suggest that perhaps no one ever is, but the focus is ultimately on the girls as they struggle both with discovering their own identities and learning about the struggles of their friends. And all of this is set against the backdrop of trying to be a successful soccer team, which involves communication and teamwork. It’s really a multi-leveled, extraordinary production.

The Wolves is full of wonderful, at times bawdy, humor and sincere and heartfelt emotion. These are high school girls outside of the world of adults, willing to speak their minds without holding back. Stalling brings out the best in them, a difficult task when the actors not only had to forge several individual characters without even the benefit of names, but also had to become convincing soccer players. That they succeed in both aspects speaks highly of their own abilities, but also of their director’s work. It also speaks highly of Katie Berkopec, who lent her skills to teach them the moves and drills they needed to make it all work. The play is costumed by Noël Huntzinger, and I want to own #46’s winter outfit. Keith Parham’s lights set a perfect mood when needed, and original music by Mikhail Fiksel keeps the show lively between scenes.

This is the kind of must-see production I love to discover: a play that blends in elements not usually seen on a stage and makes for a new, thrilling theatrical experience. One thing is certain: The Wolves is unlike anything you’ve seen before. It takes ordinary kids with ordinary things happening in their lives and somehow turns it into something extraordinary. And if you can remain unmoved by the final team cheer of “We are the wolves” that ends this play, you’re either dead or far more stoic than I am. This is a play I will remember for a long, long time.

The Wolves is now playing at Goodman Theatre, 170 N Dearborn in Chicago, until March 17. Performance times vary; check website. Tickets are available from Goodman Theatre. Find more information about current plays on our Current Shows page and at theatreinchicago.com.