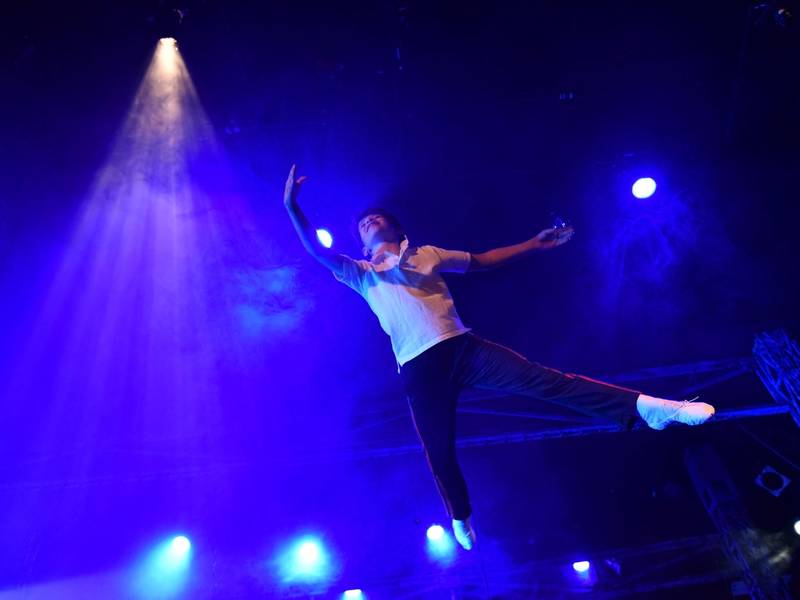 Porchlight Theatre’s Billy Elliot is a powerful production that puts its audience through an emotional wringer but leaves it feeling the joy of, in the words of one song, “expressing yourself.” Played out on a Christopher Rhoton set designed to look as lower class industrial as possible, with exposed “brick” and “metal” everywhere and huge ancient-looking clouded windows upstage, this musical, set during the infamous English coal miners’ strike of the Thatcher era that broke the unions and destroyed coal towns, contains quite a contrast at its core: Billy’s father’s life—and the town’s—is unraveling just as he discovers ballet, a thing that might be his own personal salvation if he is permitted to pursue it. Clearly the timing is rotten, but still the issue remains: is his individuality more important than the town’s solidarity in this time of crisis? And can this conservative town even accept a boy who dances ballet?

Porchlight has recently moved into the Ruth Page Theatre and director Brenda Didier and co-choreographer Craig V. Miller take advantage of its huge stage to create some imaginative and engaging choreography, from the little girls’ ballet lesson scenes to the confrontations between the cops and the striking workers, but it is when those two groups overlap on the stage, in songs like “Solidarity,” that the staging is most effective. With three distinct groups inhabiting the space and Billy torn between two of them, we see the power that the town has over the confused boy. In an emotional breakdown, he even goes so far as to imagine the cops and miners arm in arm, singing “Solidarity” together and dancing ballet. It’s a great moment, well handled by everyone.

And the play just doesn’t work without excellent choreography throughout. Didier and Miller prove a formidable pairing whether we are watching Billy’s (Jacob Kaiser at this performance; he shares the role with Lincoln Seymour) solo dancing, the powerful dream moments in which he is directly threatened by the cops, the gentle waltz between Billy’s grandfather and grandmother as young people, or the splashy tap number between Billy and his best friend Michael. The sheer variety is amazing. And even when choreography isn’t as directly called for, Didier still has to move forty-something bodies around the stage in an entertaining manner. The shining (no pun intended) example of this is the second act opener, “Merry Christmas, Maggie Thatcher.” The sheer audacity of the number, in which the chorus sings,

Merry Christmas, Maggie Thatcher, May God's love be with you

We all sing together it one breath

Cos it's one day closer to your death

is only matched by the clever visuals of a marching troupe of Maggie-girls, a Wicked Witch of Thatcher, and even a giant Maggie threatening to consume them all. That this is happening within the context of a Christmas show in the put-upon mining village makes it more fun: we watch these people, for one brief moment, laugh at their troubles.

But ultimately any play is only going to be as good as its performers. Fortunately, Porchlight has a heck of a talented cast assembled for this one. As Billy, young Kaiser is all enthusiasm. His energy is boundless, his dancing is outstanding, his sheer joy at being flown onstage (yes, the stage is that big) is palpable, and though on this day his voice was a bit on the breathy side, I had a feeling he might have been a bit under the weather. In any event, it didn’t harm his performance in any way, and whether he was singing the contemplative “The Letter” about the death of his mother or the powerful “Electricity” (about what dancing means to him), he was on his game as a performer. And when the weight of the whole town seems to be on his small shoulders, Kaiser sells that pain well, as he does when his father (Sean Fortunato, whose plaintive “Deep in the Ground” will bring tears to your eyes) bans him from dancing.

Peyton Owen, as Billy’s best friend Michael, is his equal in every way, but without the burdens he can dress as he desires and simply enjoy his life. He is what Billy can be, what he will be when he reaches the point when he becomes the phantom older version of himself played by Ivan Bruns-Trukhin: a brilliant dancer, powered only by the love of the dance and the moment. Michael, a carefree young gay boy (a rarity anywhere but especially in this time and place), lifts Billy’s spirits time and again, even if his feelings for his friend are unrequited. In the lovely, quiet end moment between them, you can almost imagine him echoing Andrew Lincoln Mark’s line from Love, Actually: “Enough. Enough now.”

Among the other stand-outs: Shanésia Davis is a completely dynamic Mrs. Wilkerson, her powerful voice and presence aided by showy costumes from Bill Morey that help her stand out from everyone else in town, and her “Shine” is (as it should be) a highlight; Adam Fane oozes teenage self-righteousness as Billy’s older brother Tony; Iris Lieberman alternates between pathos and hilarity as Grandma, who hides stale food all over the house; and Tommy Novak brings on humor both dry and physical as a marvelous Mr. Braithwaite.

This is a deeply complex show: on the one hand, it is a musical about a boy discovering his love for dancing and overcoming prejudice to fulfill his dream. On the other hand, it is a drama in which an unfeeling government enacts policies that destroy the livelihood of an entire town of people we come to have feelings for. That both of these events happen, both threads work, and somehow we all end up feeling great at the end shows how well put together it all is. Porchlight’s production wrings everything possible from it and leaves the audience at its new home eager to come back to see how they will adapt their next show to this space.

Billy Elliot is now playing at the Porchlight Theatre, located in the Ruth Page Theatre in Chicago, through Nov 26. Tickets are available from Porchlight Theatre. Find more information about this and other plays at theatreinchicago.com.