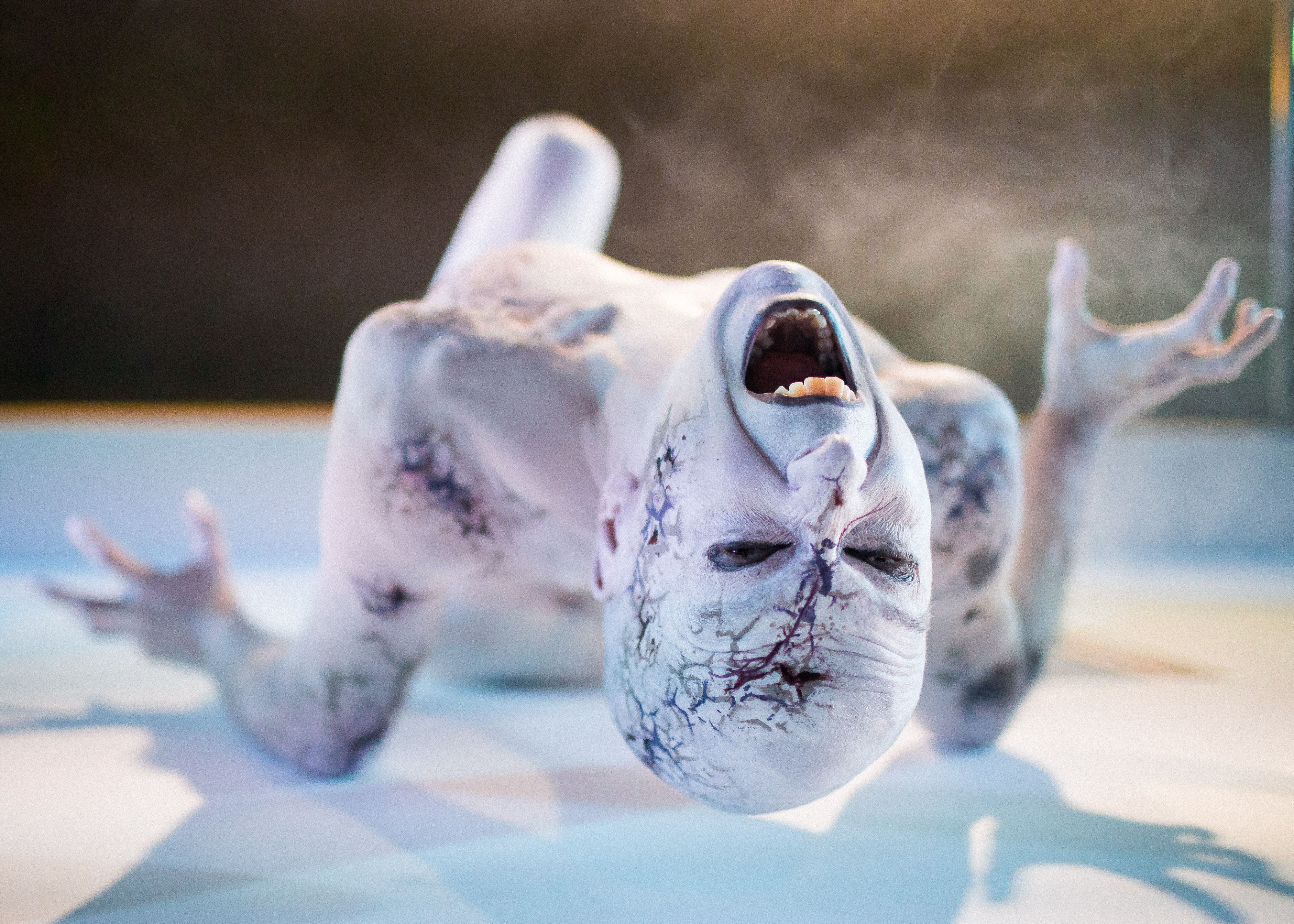 In this year, the 200th anniversary of the novel Frankenstein, Chicago is blessed to have multiple theatre companies taking on the iconic work from many different perspectives. This week marks the opening of Remy Bumppo’s take on the Mary Shelley masterwork. Using a script written by Nick Dear, this Frankenstein focuses its attention almost entirely on the journey of the Creature. This is both a strength and a weakness of the show.

I should note at this juncture that the Dear adaptation calls for the actors playing the Creature and Victor Frankenstein to switch off roles during the run. Thus what I saw, with Nick Sandys as the Creature and Greg Matthew Anderson as Victor Frankenstein, may not be what you see on any given night. But I can only review what I saw, and what I saw was this: a virtuoso performance by Sandys in a show that, for the most part, left me a bit cold (and not because it spends its last segment in the Arctic). This is not the fault of anyone involved with this remarkable production, though. Ian Frank’s direction could not be more impressive. Not only does he keep things moving beautifully, making full use of Joe Schermoly’s minimalist set with all of its potential entrances, but he had to hone two actors in what is an utterly impressive physical performance. No, the fault lies in the adaptation itself.

While focusing on the Creature is a completely reasonable thing to do (Shelley’s novel does it for much of its length), Dear fails to create any depth at all in its nemesis, Victor. Frankenstein is portrayed as a purely one-dimensional character: an arrogant academic. Even his relationship with his fiancée (Eliza Stoughton) is less than developed. In the novel, though Frankenstein is overly focused on his standing in the scientific community and thus makes several callous and careless decisions, he does clearly love her. Here we are left wondering why Elizabeth hasn’t just dumped this clown and moved on. And it’s not due to Anderson’s performance, which is very strong as he tries to create powerful emotion out of almost literally nothing. Dear just didn’t give him any weapons here: there is no motivation for his rejection of the Creature in the first place (though, to be fair, there isn’t much in Shelley’s novel either: allegedly it’s due to the Creature’s hideous appearance, but Victor put it together; he should already know what it looks like) and not enough motivation for vengeance in the end. (Several subplots that help that along are left out of the adaptation). Without greater emotional investment in this central character, his world is unfortunately left a cypher.

Not so the Creature, and here again I remind you that I am speaking of Nick Sandys’ performance only, for I have not seen Anderson’s. Frank and Dear give us a powerful and dramatic, almost wordless “birth” sequence at the start of the play, showing how the Creature comes to life, is rejected, and ends up adrift in the world. Sandys, covered in white makeup and some remarkable and hideous scars, shows its struggles with the simple tasks of learning to walk and vocalize in a series of brief scenes that also highlight the emotional center of its life: its reaction to the almost automatic revulsion that others feel upon seeing it. (Those scars are uncredited, as there is no makeup artist listed in the program. But they are indeed impressive.) In two telling sequences, the Creature is attacked and beaten by people who should have been more sympathetic: an outcast gay couple in the woods and the children of an old blind man (Frank Nall, who also plays Victor’s father) who has befriended the Creature and taught it to speak and read. Though he calls out to them that it is his friend, they still seek to destroy it. All of this intense loathing and rejection forms the basis for the Creature’s more violent, inhuman side. (Or is it actually human? The “inconsistency” of human interaction is a key theme of the novel and play.)

This is in no way a Frankenstein for children. There is full frontal nudity of both sexes during the show, and a lot of violence (nicely choreographed by Sandys). Also, the story is complicated: following Shelley’s lead, it takes place all over western Europe from England to Geneva to the Orkneys, and it doesn’t ever ask the logical question Shelley never asked as well: just how does the Creature, on foot, follow Frankenstein to these locations? Sandys’ performance might also be nightmare-inducing in younger kids. Caveat emptor.

Production-wise, this Frankenstein is outstanding. Schermoly’s set has floor to ceiling poles that, as the play goes on, become more and more angled and a set-wide crack in the cyc, both of which create a visual metaphor for the chaos that is going on. (Some set pieces from various locations remain onstage while the scenes shift, another bit of visual chaos.) Mike Durst’s lighting is dynamite: not only that brilliant cyc but a powerful use of under-lighting as well as more subtle shifts for time of day and location. And Christopher Kriz is onhand to create mood music and some outstanding sound effects. (The thunder will make you jump out of your seats.)

So, a brilliant lead performance, strong direction, intense and exciting tech, and good acting throughout: why then do I feel so disconnected from this play? Lifeline’s more personal version of the story (it features a gender-switched Frankenstein and a puppet Creature) creates a much more intense emotional experience due to its powerful focus on Frankenstein’s sense of loss and personal guilt and pain. But that is an overlaid motif and, while it derives in part from the novel, does not seem as true to it as this one does. Still, there is a reason that 20th (and 21st) Century versions of this story veer away from Shelley’s original: even the novel’s subtitle, “A Modern Prometheus,” focuses on its more theoretical nature, which is not the best one for summoning horror in modern audiences. All of the powerful production aspects in the world can’t make a one-dimensional character more human. I refer of course to the title character and not the Creature, who is ultimately and ironically the most recognizably human character in the novel and play. Come for the amazing lead performance and the awesome production; you’ll be thrilled. But I don’t think you’ll leave having been touched by any emotion as intense as that which Sandys portrays, and that’s unfortunate.

Frankenstein is a Remy Bumppo Theatre production now playing at Theatre Wit, 1229 W. Belmont, Chicago until Nov 17. Check the website for specific dates, times, and tickets. Find more information about current plays on our Current Shows page and at theatreinchicago.com.

3 thoughts on “Remy Bumppo’s Frankenstein: a powerful performance in an oddly distancing play”