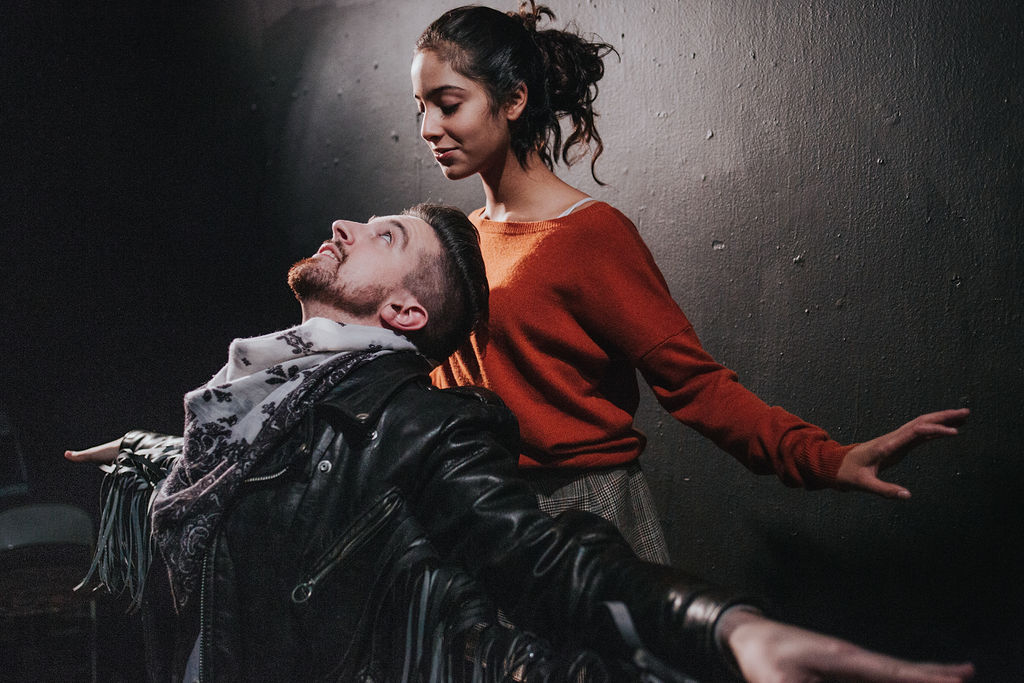 Like Frankenstein, there are several shows playing right now that take Edgar Allan Poe stories and/or poems and present them along with original material. The latest opened Saturday night at an unassuming little black box theatre on Jarvis Ave which Theatre Above the Law calls home. Here, Christine Lepri’s POE tries a different tactic than some others: it seeks to scare you and also to make you laugh. The Tony Lawry-directed production, lavishly costumed and performed on a minimal set, embellishes Poe’s familiar work by adding often humorous dialogue between and even during the scenes, clearly trying to offset the darkness of Poe’s stories and poems. It succeeds far more than it doesn’t, and this tiny company with no operational budget ends up putting on quite an entertaining show.

The conceit of POE is that the Raven (Michael P. Dalberg) and Poe’s dead-wife-stand-in character, Lenore (Lena Valenti) are our hosts as we meet in a bar to take a kind of tour of Poe’s twisted mind featuring versions of “The Fall of the House of Usher,” “The Masque of the Red Death,” “The Tell-Tale Heart,” and of course “The Raven.” Dalberg and Valenti take roles within the acted-out stories themselves and especially during the interesting gender-crossed reading of “The Raven,” featuring some line readings by Valenti that render the oppressive proceedings downright funny.

North Rory Homeward (full disclosure: he’s my son) plays the haunted Roderick Usher, stuck in his decrepit house with his dying sister (Julia Rowley, whose lovely singing voice is on display at one point in the evening) and forced to entertain an energetic young visitor (David Hartley). Homeward has the thankless task of playing the utterly depressed man at the center of a piece that is one of the most unremittingly depressing stories in the Poe canon. While Hartley tries to cheer him up in between letters to his sister (Valenti), bartender Ann-Claude Rakotoniaina has some fun with the home’s famous cracked facade. Rakotoniaina, who is also credited as costume designer, has the featured role of Princess Prospera in Lepri’s version of “Masque of the Red Death: a self-centered, petulant ruler, all she can think of is throwing herself a birthday party despite the scourge of the plague decimating her country. When the Red Death itself appears (in a simple but chilling costume) at the party, what follows is a terrifying moment as it takes over and destroys everyone present.

Homeward has another round as the Tenant who kills his old landlord (Dalberg) in “The Tell-Tale Heart.” This highly energetic performance is the exact opposite of Usher: the “madman” simply can’t be stilled or stopped. The story is rather unfortunately edited (just how did the old man's corpse get below the floorboards anyway?) but fills in details of the Tenant’s relationship with the old man that Poe left out and ultimately works very well. Theatre Above the Law takes youth mentorship seriously, and features a young performer or behind-the-scenes artist in every show. In this one it is Valenti, whose Lenore shines despite her youth. In the end, when Lawry has all of his performers closing in for a final “Nevermore,” we know despite the comic moments and the interpolations (or maybe because of them) that we’ve witnessed Poe at his eerie and unforgettable best. If the stories seem a bit drawn-out at times, take heart in the fact that the production is a brisk 75 minutes. This is not high-concept or deeply serious Poe, but it is charming and affecting and occasionally thrilling. Not a bad way to spend part of your evening.

POE is a Theatre Above the Law production now playing at 1439 W. Jarvis, Chicago until Nov 11. Check the website for specific dates, times, and tickets. Find more information about current plays in our front page recs and at theatreinchicago.com.