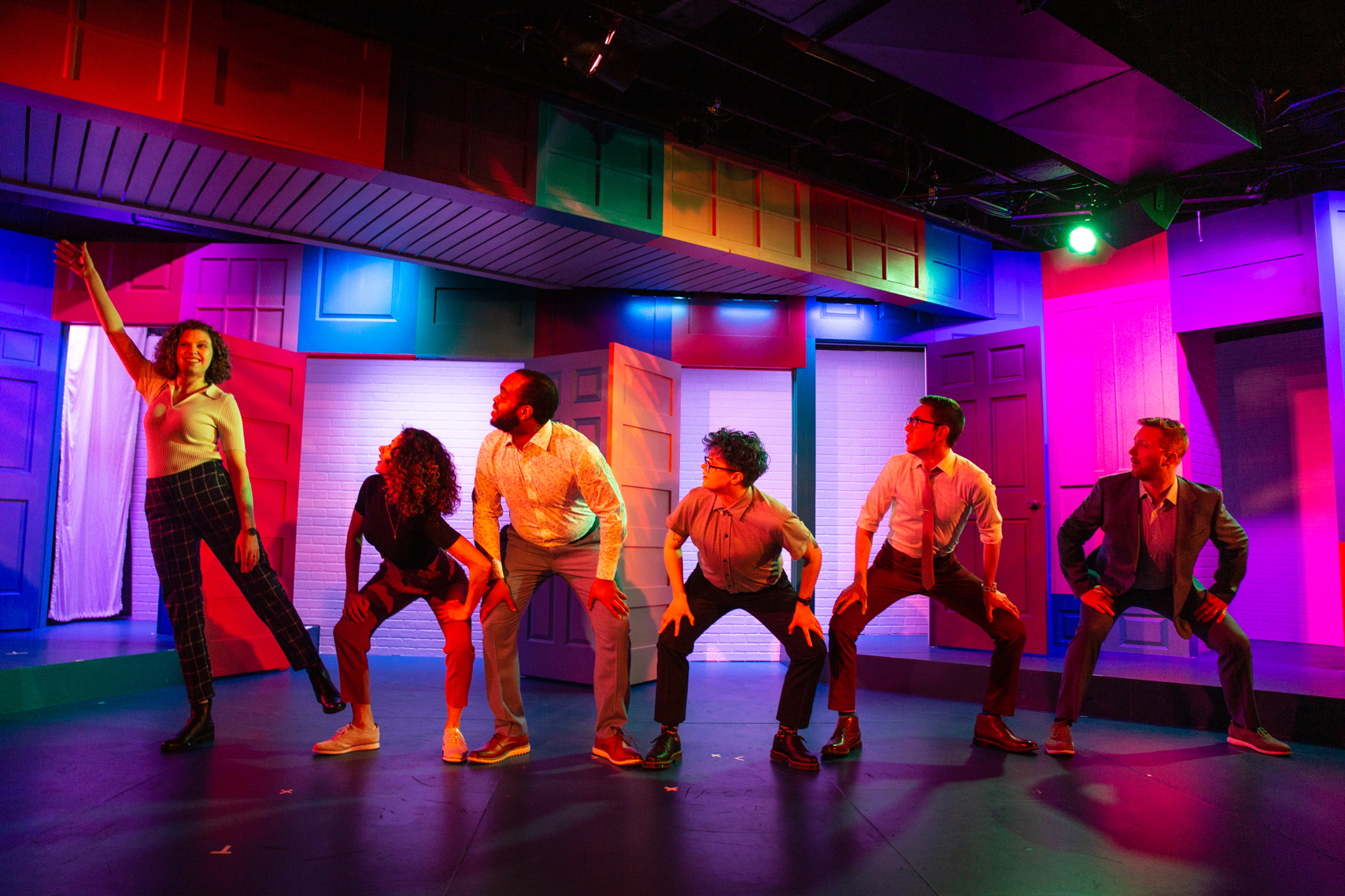 With a title like “Grinning from Fear to Fear,” you might expect this 43rd Revue at Second City e.t.c. to be heavily focused on the national political scene, climate change, immigration, or any of the myriad other fears touching our country today. And, yes, some of this does come up during the show, which occasionally hits hard, but overall this show is more about the grinning than the fear. It is also one of the most personal and most smoothly interconnected shows Second City has done in awhile; even small throwaway bits have a tendency to pop up again later in the production, creating a continuity that just makes everything better. This may have a lot to do with the way director Annaliese Toft, in her second revue, approaches the material. Second City does not often have female directors, and Toft makes every effort to make this her show.

Climate change does warrant a sketch in which Andrew Knox admonishes us that “just believing in climate change will not unmelt the ice,” noting pointedly that there’s a whole lot that needs to be done beyond merely accepting it as true. But most of the “fears” this revue is about are the more internalized kinds. It opens with a nervous boyfriend (the very funny Mark Campbell) at dinner with his girlfriend Atra Asdou’s parents, so certain that he will somehow screw things up that he ends up making a fool of himself over and over again. Another sketch has Knox at his own surprise birthday party, confronting his deep fears that all of his friends might not really like him that much at all. Campbell and Knox team up at the center of the night’s focus sketch, “Toss and Turn,” in which Campbell, trying to get to sleep, is forced by his overactive brain (Knox) to confront everything that he has ever done wrong. The other ensemble members come from behind doors (on a lovely multicolor set by Bob Knuth) to play the sources of these various issues. Chuck Norment, for example, turns up as an ancient nun chanting “Shame, shame” every time Campbell feels ashamed, just in time for the restart of “Game of Thrones.”

Norment has their own showcase scenes in the show as well, notably an Act Two turn as a “neo-chauvinist male” who interrupts a touching moment between Asdou and Campbell (again playing the boyfriend and girlfriend from the earlier scene) in order to attack Campbell’s character for being “weak.” It’s a hilarious scene that nearly cracks all three of them up several times. Norment, a trans performer, also shines as a teenager trying to tell an unsuspecting father (Knox) a difficult fact of their life.

Asdou and EJ Cameron share a very funny sketch about two parents (from different families) watching a youth baseball game and alternately cheering their children on and criticizing them not for their play but for their prepubescent offsprings’ too-militant declarations of their ethnic heritages. Cameron’s son (who he says he named Chet “to confuse white people”) wants to be tough and assert his blackness but, as his father says, “you can’t be hard with a gluten allergy.” And Asdou’s daughter insists that her Americanized Mom honor her Muslim heritage, through she finds baklava “too spicy.”

Speaking of children, one sketch has a hormonal Laurel Krabacher desiring to have a child with her husband (Knox) to give her life “a purpose.” Knox, though, is practical about it: “You can’t travel with kids. Well you can, but it looks like it sucks.” Krabacher also has one of the evening’s highlights as she tap dances her way through an ode to the antidepressant drug Lexipro (which Cameron’s Big Pharma supplies, needed or not, just because he can).

It’s a wonderful, hilarious evening glued together by some inventive direction by Toft both during the sketches and between them, and clever music by Jacob Shuda. And it is one of the tightest revues you could ever expect from Second City. Even a scene in which four audience members join the sketch seems perfectly timed and works like a charm. Of course, this might depend a bit upon the audience members selected on a given night, but this cast is ready to improv and eager to show their skills, and Toft has the audience with them from the very beginning.

Grinning from Fear to Fear is now playing at Second City etc, 230 W North Ave, Chicago, in an open run. Check the website for specific dates, times, and tickets. Find more information about current plays in our front page recs and attheatreinchicago.com.