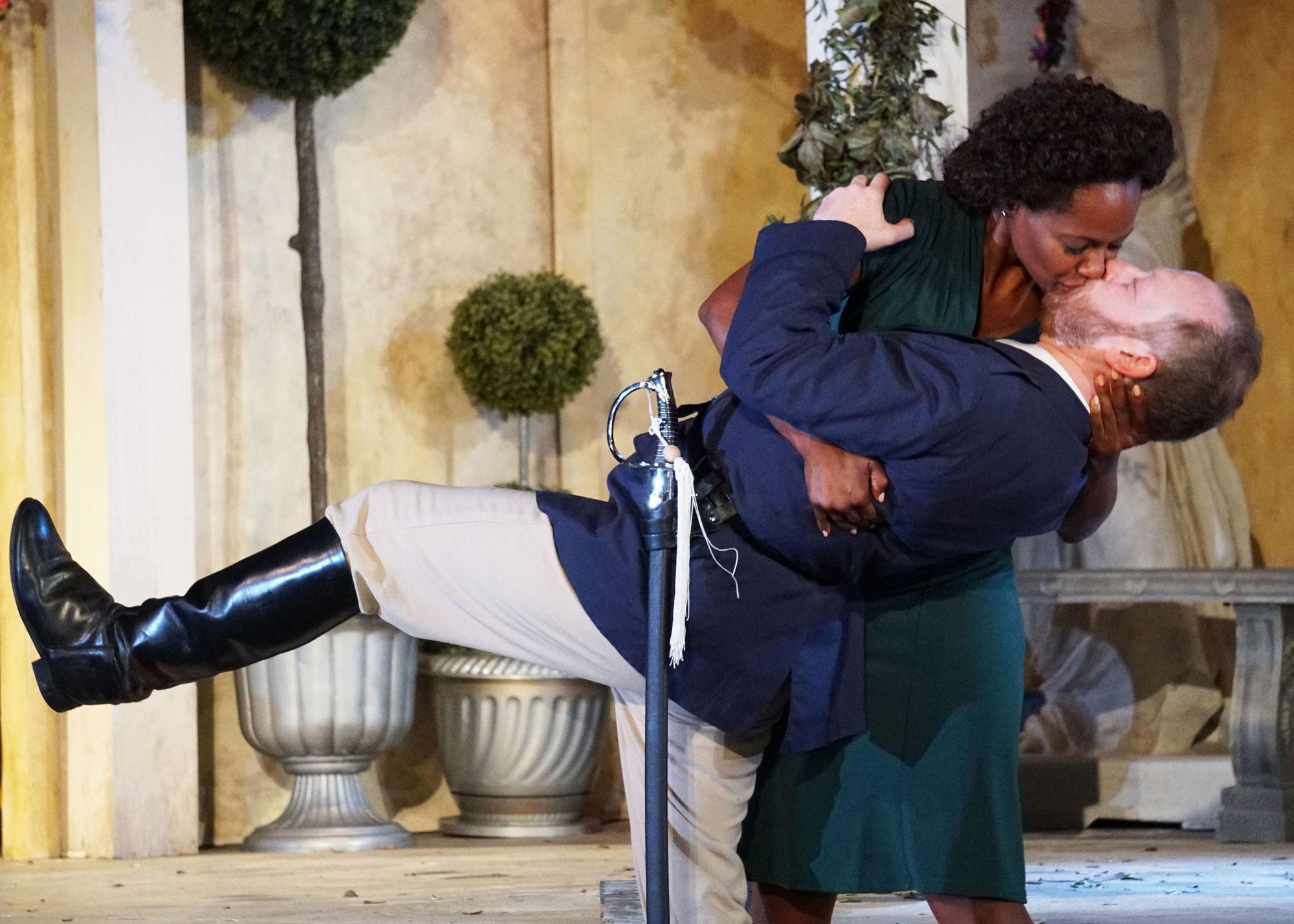 It’s Shakespeare versus an army of cicadas at Oak Park Festival’s Much Ado About Nothing and, at least for the first half hour or so, the insects clearly have the upper hand. As the expositional scenes of the play set up the comedy and the conflicts, I strained to hear the actors over the cacophony from the trees. Ah, the problems of outdoor theatre in Chicago in August. Once darkness falls and the bugs go to sleep, though, things clear up mightily and the audience can settle into enjoying an evening with Beatrice and Benedick and the rest of the denizens of Messina in a play both rife with hilarious verbal banter and burdened by seriously outmoded gender politics.

Director Melanie Keller shares my concerns about the play’s treatment of its young heroine Hero (Tina El Gamal), the victim of an evil trick by Don John (Bret Tuomi, who also shines as Dogberry, one of the Bard’s most iconic clowns). John convinces the men in Hero’s life, including her fiancé Claudio (Ian Michael Minh), that she is unfaithful, which renders her unworthy of marriage. One can’t blame a 16th Century playwright for adhering to a 16th Century perspective about women, though Claudio’s decision to “shame her” in public at their would-be wedding has always struck me as especially harsh. It certainly feels that way here, as Minh goes off on her like a rocket while poor Hero, who doesn’t even know what is going on, crumbles in pain and even her father Leonato (Patrick Blashill) doesn’t know what to think. Keller can’t do much to blunt this sexist barrage, which is a heart of darkness that always leaves me cringing in an otherwise wonderfully witty play, especially in an era in which more and more often women are not listened to and fall victim to the capriciousness of men.

Still, she is careful to empower the women here as much as it is possible to do so. Ursula, Leonato’s sister (Noelle Klyce) fiercely advocates for her niece. Margaret, Hero’s lady in waiting (Lizzy Bourne), is given the full breadth of her witty rejoinders. And of course Beatrice herself (Eunice Woods) is easily a match for Benedick’s (Bryan Wakefield) often caustic but always piquant and amusing put-downs.

Although the story of Claudio and Hero takes up considerably more space in the play, it is Benedick and Beatrice that everyone remembers most. Done well, the banter between these two, as well as the jovial game played by the others that gets them to fall in love, makes for a perfect distraction and counter to the other subplot. Wakefield and Woods work well in these roles: both are more than capable of delivering their characters’ biting lines, and both are also likable enough that, despite the verbal jousting, it’s easy to want them to get together. In addition, Wakefield’s mannerisms are often comic all by themselves, adding  physical humor to Benedick’s droll tongue, and Keller creates some very funny blocking as each of them tries to keep hidden to listen to people talking about them. Between them and the malaprop-ridden Dogberry, Shakespeare keeps the audience laughing despite the play’s ugly center.

Oak Park’s Much Ado, despite the cicadas and other occasional issues with lighting and sound, is a very enjoyable evening under the August stars. Bring a blanket, a picnic, and maybe a bottle of wine; you’ll have a great time.

Much Ado About Nothing is now playing at the Oak Park Festival Theatre, 167 Forest Ave. Oak Park, Chicago through Aug 31. Check the website for specific dates, times, and tickets. Find more information about current plays in our front page recs and attheatreinchicago.com.