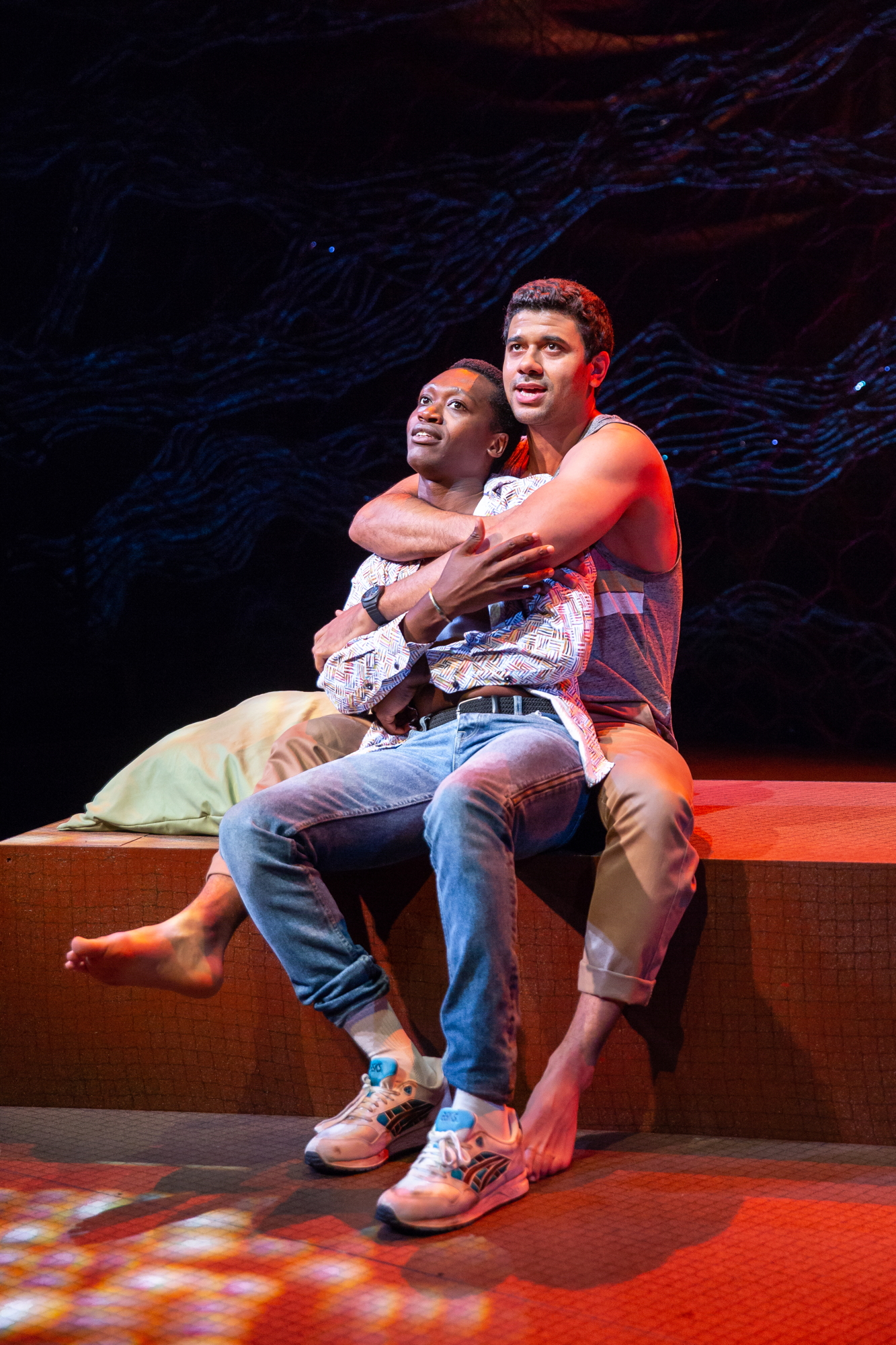 While New York City recently celebrated the 50th anniversary of the Stonewall uprising with much hoopla and an enormous, traffic-stopping Gay Pride parade that went on well into the night, New York’s Lincoln Center Theater chose to feature the other side of the coin by mounting the American premiere of playwright Chris Urch’s The Rolling Stone. Sensitively directed by Saheem Ali, the play, an import from London, is scheduled to run through Sunday, August 25th.

Though all six characters in this harrowing political play are fictionalized, the fact that in 2010 The Rolling Stone, a Ugandan newspaper, urged on by anti-gay Christian missionaries from the United States, started to publish the names, addresses, and photos of suspected gay men, which in turn inspired Urch to write this play, is very real. Chillingly so! For shockers, the inflammatory newspaper headline “Hang Them” – reminiscent of the “Jail Hillary” chants – appeared at the top of each page in bold type. As you can well imagine, violent attacks and even a murder followed, and the lives of many suspected homosexual men and their families were turned upside down.

Saheem Ali, who grew up in East Africa and is queer himself, is the perfect choice to direct The Rolling Stone. As he told one interviewer during a rehearsal break, Urch’s play had particular resonance for him. “I understand the play’s particular brand of homophobia. I was homophobic when I was growing up. I did not know any openly gay people.  It was only when I came to the United States for college that I met gay people.’

As the lights go up on Act One, after a rousing religious hymn that lets the audience know that religion is going to be a large part of this play, we see two young men in a boat. It is night and the sky is star-filled. From their light banter, it is obvious that they are on their first date and on their way, tentatively so, to being more than just close friends.

Dembe (a wonderful Ato Blankson-Wood) is an 18-year-old Ugandan. Sam (a cool, calm, and collected Robert Gilbert), with a Ugandan mother and an Irish father, is a mixed-race doctor from Ireland. In his late 20s (or is it early 30s), he is the older of the two. Sam has come to Africa, as he tells Dembe, “to try to do good.” Throughout this short introductory scene, it is obvious that love is in the air. It is also obvious that the two men alone in a boat at night are playing in extremely dangerous waters. This is made explicitly clear when Dembe nervously questions whether or not they are being watched.

Adding more fuel to the fire, we learn that earlier in the day Dembe and his siblings Wummie (LaToya Edwards) and Joe (a solid and fiery James Odom) attended the funeral of his father, a greatly loved pastor. We also learn that the church is looking for a new pastor and that Joe is hell-bent, no matter what it takes, in filling that role.

Rounding out this fine cast is Mama, an excitingly explosive Myra Lucretia Taylor. A scheming, self-serving church congregant and family friend, Mama also has a daughter Naome (the deliciously silent Adenike Thomas) who for some unknown reason has not spoken one word in the past six months. The secret-hiding Mama (only she knows why her daughter stopped speaking), having some power in the church, manages to get Joe appointed as the new pastor.  Of course, strings are attached.

The exposition-filled Act One, though well-acted and moderately enjoyable, is mostly surface. Act Two does an about turn with a fusillade of deeply heartfelt scenes that pack a wallop, many totally unexpected. Secrets are revealed, Mama reveals her true colors, Naome shockingly utters a scream, Dembe and Sam come under public suspicion, Sam and Wummie have a confrontation, and Dembe reveals his true nature to both his family and to Naome, and she tellingly hangs on to every word as he unveils his heart. It is the most intimate, truthful, and beautifully written moment in the play. Fittingly, it takes place on a boat in the quiet calmness of the water.

Most shockingly (though not totally unexpected given Joe’s macho behavior as the new head of the family), to keep his job as pastor, protect his family, and please his congregation, he delivers a vitriolic anti-homosexual sermon. “I ask the Lord what shall be done and the Lord tells me for us to look to our children. Look to our boys and if we see a limp wrist, we crush it.”

As the play nears its end, and as their world appears to be falling apart, Dembe, Wummie, and Joe have no other choice but to leave their fates in the hands of God. Whether this will be of any help at all remains to be seen.