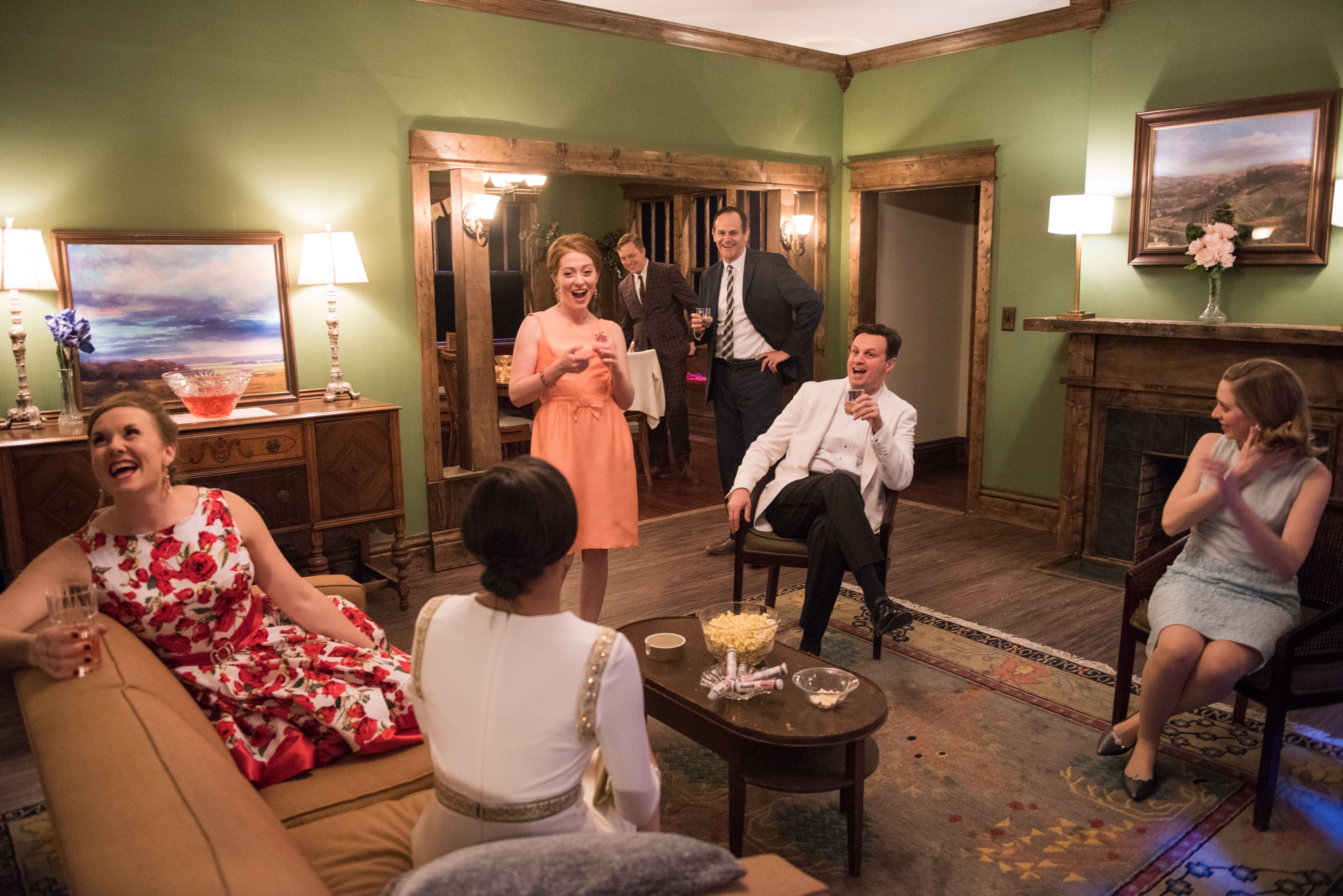 When you enter Windy City Playhouse to see its new show, Southern Gothic, you are not given a program. Instead, you are handed an “invitation” to a house party hosted by Beau and Ellie Coutier of Ashland, Georgia in honor of the 40th birthday of Suzanne Wellington. The reason for this unusual paperwork becomes clear quickly: this is not your typical play. If you’ve never experienced immersive theatre, Southern Gothic might be a bit surprising. Instead of an audience sitting still watching actors on a stage, we are invited to wander the rooms of the Coutiers’ home and act as flies on the wall while they and their guests experience what becomes a night of revelations and intrigue. During the course of the party, we become witnesses to infidelity, business corruption, a hidden pregnancy and even political scandal, all while helping ourselves to some of the “party food” and drinks. It is a remarkable, terrifically fun experience unlike anything you have seen in a theatre before. The play takes place in 1961 on a set designed by Scott Davis to look precisely like a house of that era. (Eleanor Kahn’s wonderful period props help give it exactly the right feeling.) The Coutiers, we discover immediately, have had some discord: Beau (Michael McKeogh) has just returned from a stint in rehab for alcoholism and Ellie (Sarah Grant) is walking on eggshells. Throughout the night, we are introduced to their houseguests: Ellie’s brother Jackson (Paul Fagen) and his wife, birthday girl Suzanne (Brianna Borger); politician Charles (Brian McCaskill) and his wife Lauren (Christine Mayland Perkins); and trust fund playboy Tucker (Peter Ash) and his latest girlfriend, Cassie (Ariel Richardson). The fact that Cassie is black in this place and time of course adds another level to the tension at the party, and it is clever of playwright Leslie Liautaud to incorporate this element into what is otherwise, in the company’s own phrasing, “Mad Men” meets “Desperate Housewives.” That Cassie also happens to be more educated than any of the other women and is living a much more interesting life adds to the strain of the evening. The less said about the plot the better; this is the kind of play where the audience needs to discover what is happening on its own. Each member of the audience, some sitting along the perimeter of the house on window seat-like cushions provided for that purpose, some wandering from room to room to better observe the action, has a different vantage point and thus a different experience of the play, and that is part of the fun. The script is careful to have major plot points discussed throughout the house, so no one misses anything critical, but smaller moments—a bit of hypocritical drunken fawning here, a nuanced meeting there—are the province only of those who happen to be near them. Unlike some other immersive productions, this one has a defined beginning, middle, and end. The carefully rehearsed moments that we find ourselves in the middle of play out in a specific sequence throughout the evening; there is no audience interaction and therefore no (or much less) improvisation than one might see in other such productions. In that way, it is like a normal stage play. In most ways, though, it is a unique and thoroughly enjoyable entertainment. The acting is top notch. Especially worth noting is Mayland Perkins, whose Lauren seems to be in the middle of just about everything. Throughout the evening the drunken Lauren has confrontations with most of the other players and finds herself at the center of several controversies she did not begin (and at least one she does: it is Lauren who is most ill at ease with the black woman among them). Mayland Perkins is outstanding as a woman whose life seems to be unraveling before her eyes. As the hostess, Grant also gives a stunning performance. (Her confrontation with Lauren is one of the highlights of the evening.) Borger’s Suzanne, a major party girl who somehow knows more than you’d expect her to, is also at the center of a lot of things, if only due to the fact that Borger imbues her with such an enormous personality that she easily outshines most of the quieter guests. Richardson’s Cassie is probably her opposite: calm and controlled in a hostile environment, she uses her considerable charm (and a bit of name-dropping) to get through the evening.

As to the men, McKeogh’s Beau is a study in interior acting. From the start, he is the center of gossip due to his rehab stint, and as the play progresses he does everything he can to remain as calm as he can despite the revelations that arise, some of which cut close to home. McCaskill’s Charles is his opposite: a racist ass who is up for Senator, he manages to alienate just about everyone, including his wife, during the night, and he is physically abusive on top of that. Ash’s Tucker is a bit overwhelmed by all of the argument; a privileged man, he seems to see himself as above it and his choice of date is emblematic: when it is pointed out that marrying her would be illegal in Georgia, he simply says that he will take Cassie to Chicago. There is nothing his money cannot fix, except perhaps his friends’ lives. Finally, Fagen’s Jackson is the party’s Everyman. He is at the center of nothing but involved in everything, and Fagen allows us to watch as he struggles with a discovery that brings pain to Jackson’s sister and others at the party.

Lighting and sound design on a show such as this might be tricky, but Becca Jeffords and Jeffrey Levin, respectively, are up to the tasks. Telephones actually ring. Music actually comes out of the radio or record player. Lighting is perfect everywhere, and there is enough spill light to see things even when some rooms become darkened. Elsa Hiltner’s costumes, like the props found everywhere, are perfect period pieces, and the dresses worn by Borger and Richardson are especially impressive (for different reasons, as they carefully highlight the very different personalities of the characters wearing them).

Southern Gothic, which has a limited audience of 28 people per show because of its structure, is an intensely personal experience. The “fly on the wall” characteristic is voyeurism in its most raw form. The fact that, as in real life, different things are happening in different places keeps the focus changing throughout the night; we quickly realize that it is impossible to see and hear everything. If you went back a second time, you could have an entirely different adventure. It is all brilliantly theatrical and an incomparable, absorbing night out, as a good dinner party ought to be.

Southern Gothic is now playing at Windy City Playhouse, 3014 W Irving Park Rd, Chicago through April 22. Tickets are $65-85 and are available at windycityplayhouse.com. For more information about this and other shows, see theatreinChicago.com.