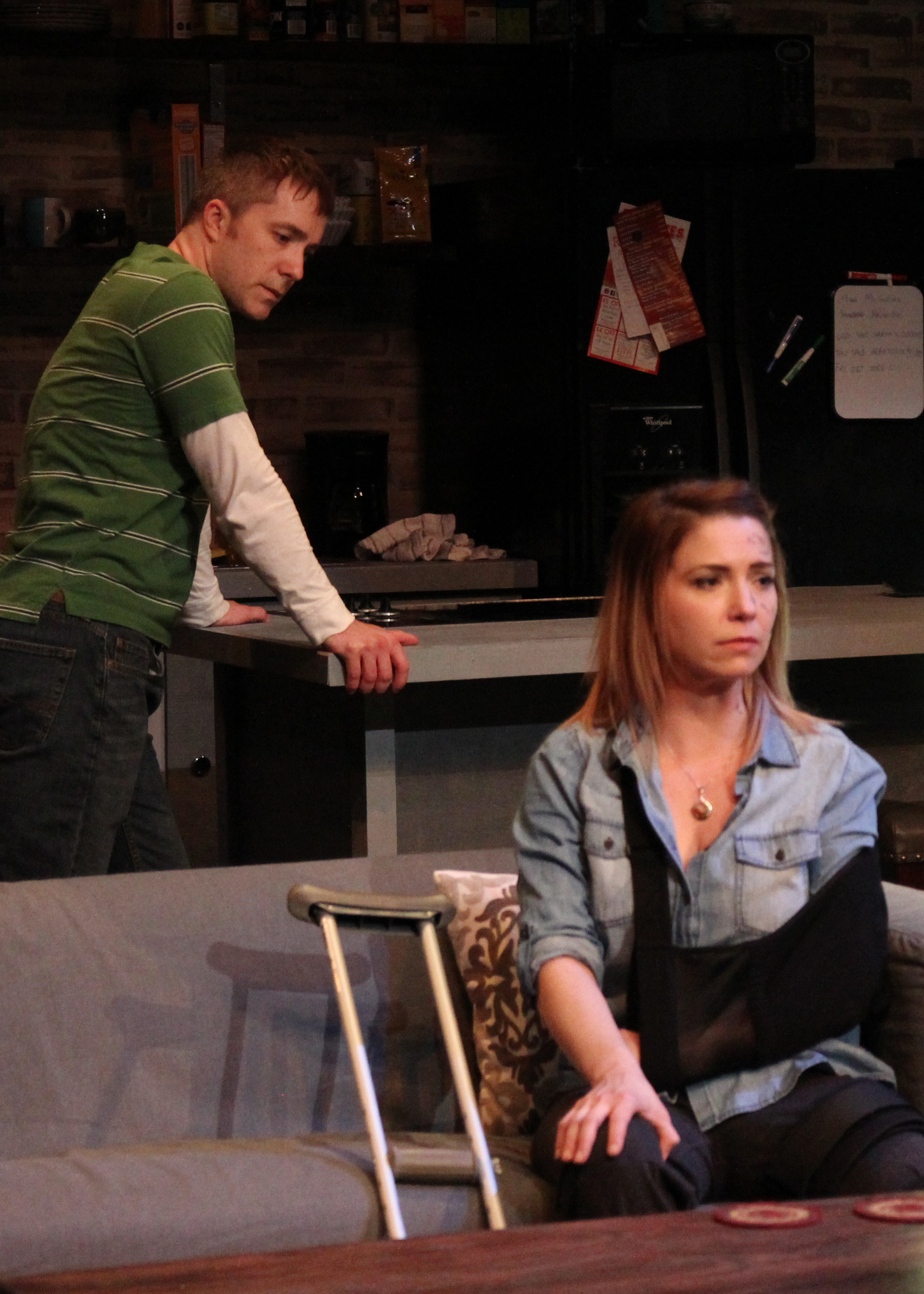 In a world that is increasingly one in which citizens find the need to stand up to fight the wrongs they perceive to be occurring around them from Women's marches to #MeToo, Donald Marguiles' Time Stands Still ends up meaning even more than it did when he wrote it in 2009. This play, about the desperate need some people have to use their abilities to do whatever they can to fight those wrongs even at personal cost, fits into today's political environment as well as it did when it was written. It begs the question just how much we weigh our personal needs against whatever we may be able to do to better the world and, when those two drives intersect, which prevails. Further, it asks what the role of media ought to be in covering terrible events: do they really help by recording them or should they instead be helping more directly? Buffalo Theatre Ensemble's provocative production of this compelling play will leave you pondering these questions long after you leave the theatre. The play centers on the character of Sarah Goodwin (Lisa Dawn), a war photographer who has been seriously injured in a roadside bombing in Afghanistan, and her long-term boyfriend James Dodd (Brad Lawrence), a writer whose own mission to that war-torn country was cut short due to an emotional breakdown. At the start of the play, James has just returned with Sarah from Germany, where she has spent many weeks starting to recover from her injuries, which have devastated her entire left side leaving scars on her face, her arm in a sling, and her leg in a full cast and a lot of pain. Throughout the play, as she and James consider retirement and marriage more for his sake than hers, we watch as time goes by and she quite literally learns to stand on her feet again.

The nine-year relationship between these intelligent, world-conscious people is sharply contrasted with the brand new relationship of their editor, Richard Erlich (Kurt Naubig) and his much younger, much less worldly girlfriend Mandy Bloom (Amanda Raudabaugh). Mandy is a very sheltered person, a twenty-something event planner whose thinking about world affairs is limited to falling to pieces at the thought of baby elephants dying on the Discovery Channel, yet Richard truly appears to have found something he's been missing in her. His previous long-term relationship has left him cold, and Mandy has awakened something within him. To Sarah and James, it seems like cradle-robbing, but Richard is truly in love despite or because of Mandy's innocence and naïvete. As the two main characters, each suffering from their own PTSD, try to recover and James seriously considers whether he ever wants to return to such dangerous work, we watch one relationship foundering and another growing.

Time Stands Still heavily explores the morality of being a member of media during times of catastrophe. How can one justify standing there and photographing horror instead of pitching in to stop it? Mandy's breakdown over the elephants was as much about the fact that someone stood by and filmed it instead of helping the poor lost baby find its way out of danger. Sarah questions incidents in her own life when her compulsion to record disaster interfered with her more human responses. The play does not try to resolve this conundrum; rather it leaves the question hanging and we realize that each must decide such things for themselves. As Sarah, Dawn is remarkable. Though she looks much younger than the forty-something she's supposed to be, her performance is powerful. As the literal pain from her leg slowly vanishes and she goes from crutch to cane to walking again, she struggles with her calling: how much good is she in fact doing? And is it possible, as James desires, to give it up? Dawn's portrayal of physical pain is the focus at the start, but as that pain subsides it is replaced by an internal struggle that she makes just as acute. It is only if she can conquer both that she will be able to move on with her life. Lawrence's issue is different: his character's injuries are not physical but mental, and all he can see is that his love for Sarah keeps him grounded. As he struggles with how grounded he needs to be, Lawrence shows us a man who is as torn as his girlfriend, but his problems don't revolve around going back; he wants to save something far closer to home. His concern for Sarah overwhelms her; all he wants seems to be to keep her from any additional harm even if that fussing bothers her greatly, and we watch as James slowly starts leaving his old life behind while Sarah seems to feel her mission is incomplete. Perhaps physical injuries are easier to overcome than mental ones. Raudabaugh makes a wonderful Mandy, at first playing the character as little more than a child but allowing us gradually to see that there might be more to her. With Naebig's Richard, an older man who feels young again with her, she shows that it is possible for time not to stand still while the central couple remains locked in its stationary grasp.

Director Connie Canaday Howard's scene transitions help us to see this notion. I don't know if they are written into Marguiles' script or not, but they are among the most unusual transitions I've seen: instead of blackouts and quick changes, characters slowly, in dimmed light with no dialogue, finish up the previous scenes to Christopher Kriz's original music before moving onto whatever comes next. That the later scenes are not continuations but happen often months later shows that these characters' lives are not moving on, that they are stuck. While Richard and Mandy (who becomes pregnant and has a baby during the play) find their lives changing radically, time, the transitions continually remind us, has trapped James and Sarah. Canaday Howard's direction outside of these moments (which move forward with no urgency until they are complete) is crisp and well-paced. The juxtaposition is sometimes jarring as is the juxtaposition of their war-torn lives with this quiet, simpler world. A lot of life gets lived in between the big moments, and these transition scenes help show us that.

Michael W. Moon's set, a very realistic loft, is gorgeous, as is Claire Chzan's lighting which perfectly recreates the various moments and emotions of the play. Rachel Lambert's costumes, understated except for Mandy's, are also perfect. If the transitions seem more like slow motion dream sequences, the rest of the play is solid realism, and that makes the issues it brings up even more important. Marguiles' script begs us to ask real-world questions that have no easy answers; the design team here has helped to keep them in focus.

Time Stands Still asks us to consider our place in the world and our duties to our fellow human beings as opposed to our duties to ourselves.  BTE's production is challenging and arresting: it demands that its audience contemplate issues that, more and more, come into the forefront of our daily lives. We are not all war correspondents literally putting our lives on the line, but today's world begs us to do more than sit back and read the news. This is a thought-provoking, beautifully acted show and easily worth the trip to College of DuPage to see it.

Time Stands Still is now playing at McAninch Arts Center (the MAC) at College of DuPage. For tickets ($20-37) see www.atthemac.org. For more information about this and other shows, see theatreinChicago.com.