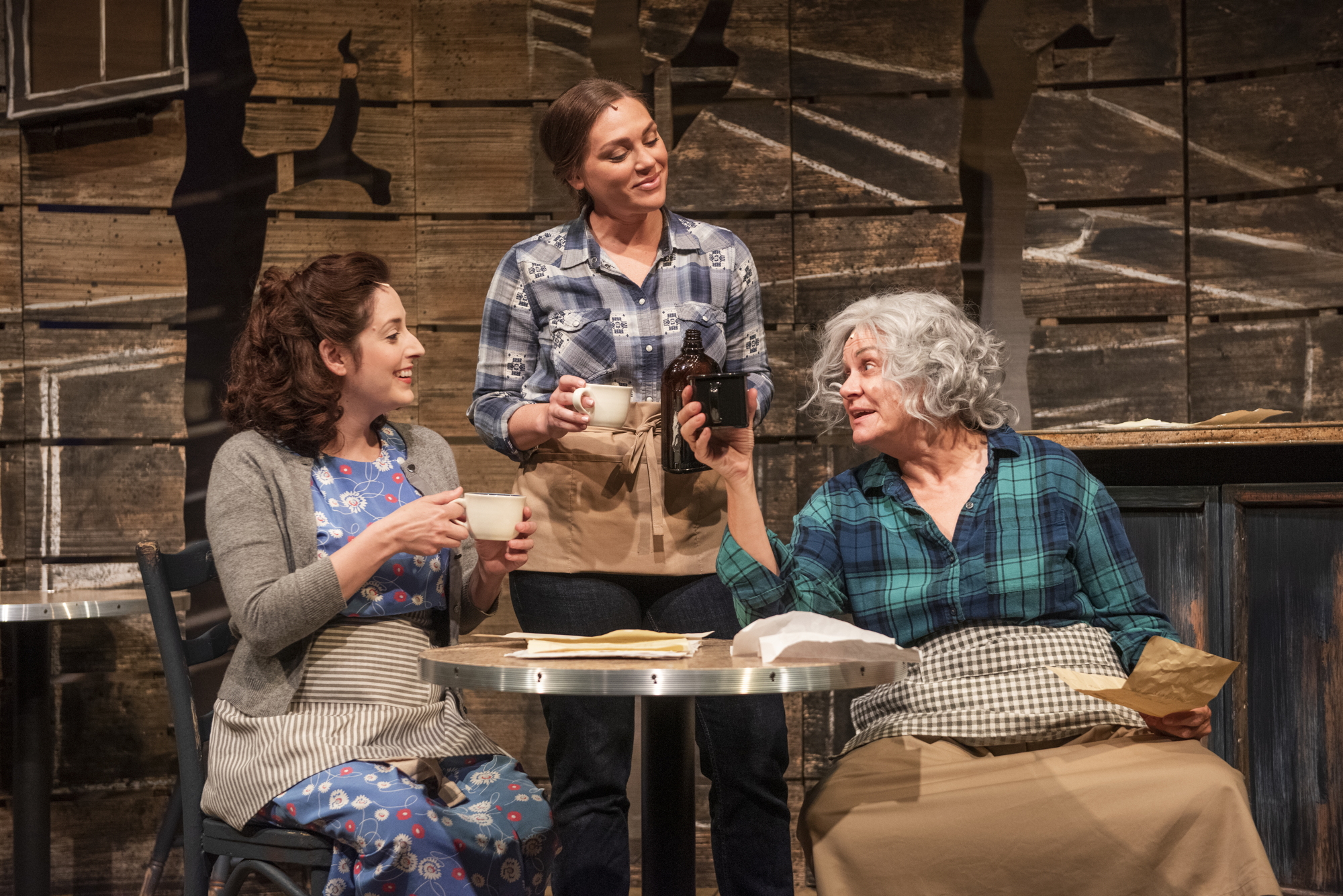 Sometimes, these days, it seems as if we’re spiraling down some dark path with no real hope of salvation or redemption. But every once in a while, some play comes along that reignites that spark of hope in our hearts. American Blues Theatre has found just such a show for its current production, a musical that dares us to believe that, no matter how dark it gets, we can still find a way to shine. The Spitfire Grill, by James Valcq and Fred Alley, was first presented off-Broadway on October 2, 2001, only three weeks after 9/11 had devastated the nation. At the time, critics lauded its message of renewal and rebirth; it feels equally necessary today.

The show’s main character is Percy Talbot (Jacquelyne Jones), a twenty-something West Virginian woman who has spent the last five years in jail and now, having gotten out, seeks to start over. Based on a photo from a travel brochure, she picks the (mythical) town of Gilead, Wisconsin because she longs to see the “colors of paradise” etched into the leaves of its trees. But Gilead, as it turns out, is practically a ghost town, and the town’s only restaurant, where she seeks employment, is dying along with it. Though everyone in town eventually comes there, the owner, Hannah (Catherine Smitko), has been trying unsuccessfully to unload the place for ten years. Percy comes up with the notion that Hannah should “shoot the moon” by holding a lottery of sorts: send in a $100 entry fee and an essay saying why you want the Grill and it might be yours. Soon letters are overwhelming the tiny town’s post office (and its gossip-mongering postal officer, Effy (Gabrielle Lott-Rogers), and the contest is on.

There is nothing in this show that will particularly surprise you, from Sheriff Joe (Donterrio Johnson) who falls for Percy to the ultimate resolution of the contest, but that is not the point. Here we are focused on life at its darkest: Percy is broken by her years in prison and feels unworthy of the good life she so desperately desires. Hannah has failed to overcome the depression caused by her son’s missing status after the war. Caleb (Karl Hamilton) has spent a decade competing with the ghost of that son, the town’s golden boy, and takes his frustrations out on his wife Shelby, a perpetually positive person played by Dara Cameron. And it is the middle of winter when the play begins: with so much ice and snow and nothing growing, the town feels absolutely dead.

Director Tammy Mader and her frequent collaborator, Musical Director Malcolm Ruhl, get wonderful performances from every one of their actors. Jones, who recently won a Jeff Award for her portrayal of Mrs. Lovett in Theo Ubique’s Sweeney Todd, is sympathetic and earnest in her portrayal of a woman who has suffered much in her life, yet somehow manages to help this moribund little town and its inhabitants come alive while simultaneously melting her prison-tough veneer back into someone who can appreciate where life has taken her. Smitko fully inhabits the role of Hannah, who long ago was broken by the loss of her son and now mostly goes through the motions of life. Hamilton brings depth to what could be a purely villainous role as Hannah’s frustrated and chauvinistic nephew, and Cameron as his long-neglected wife convincingly blossoms as she hangs around with the independent Percy and learns how to assert herself. Lott-Rogers is a strong Effy, who grows from the judgmental town gossip to someone who can see the value in others and the beauty in Gilead. Johnson, too, gives a fine performance as the sheriff relearns how to love his life as he starts falling in love with Percy. Gifted musically, the whole cast brings out the power of the big numbers as well as the softness of the nearly whispered moments as we wish harder and harder that the “wild bird” Percy can learn to nest in this little hamlet.

It may not be a show full of surprises, but it is one full of sincere emotion. From Jones’ plaintive opening number, “A Ring Around the Moon,” to Smitko’s “Forgotten Lullaby,” we get to know all of these people through the songs they sing, and combined they help us to understand the town. Lott-Rogers provides the comic relief for the most part, but there are moments when even Effy is moved by what is going on here. And Caleb is not simply a villain; he is afforded an opportunity to explore his own lost life in “Digging Stone,” a tribute to the quarry that has shut down and the men who worked there. By the end, the town has “come alive again” in every possible way, and those who felt most adrift find acceptance, peace and love. And we who are watching are reminded that there is always a summer after the winter, that hope is possible even in the darkest of times.

The Spitfire Grill is an American Blues Theatre production now playing at Stage 773, 1225 W. Belmont, Chicago through August 17. Check the website for specific dates, times, and tickets. Find more information about current plays in our front page recs and at theatreinchicago.com.