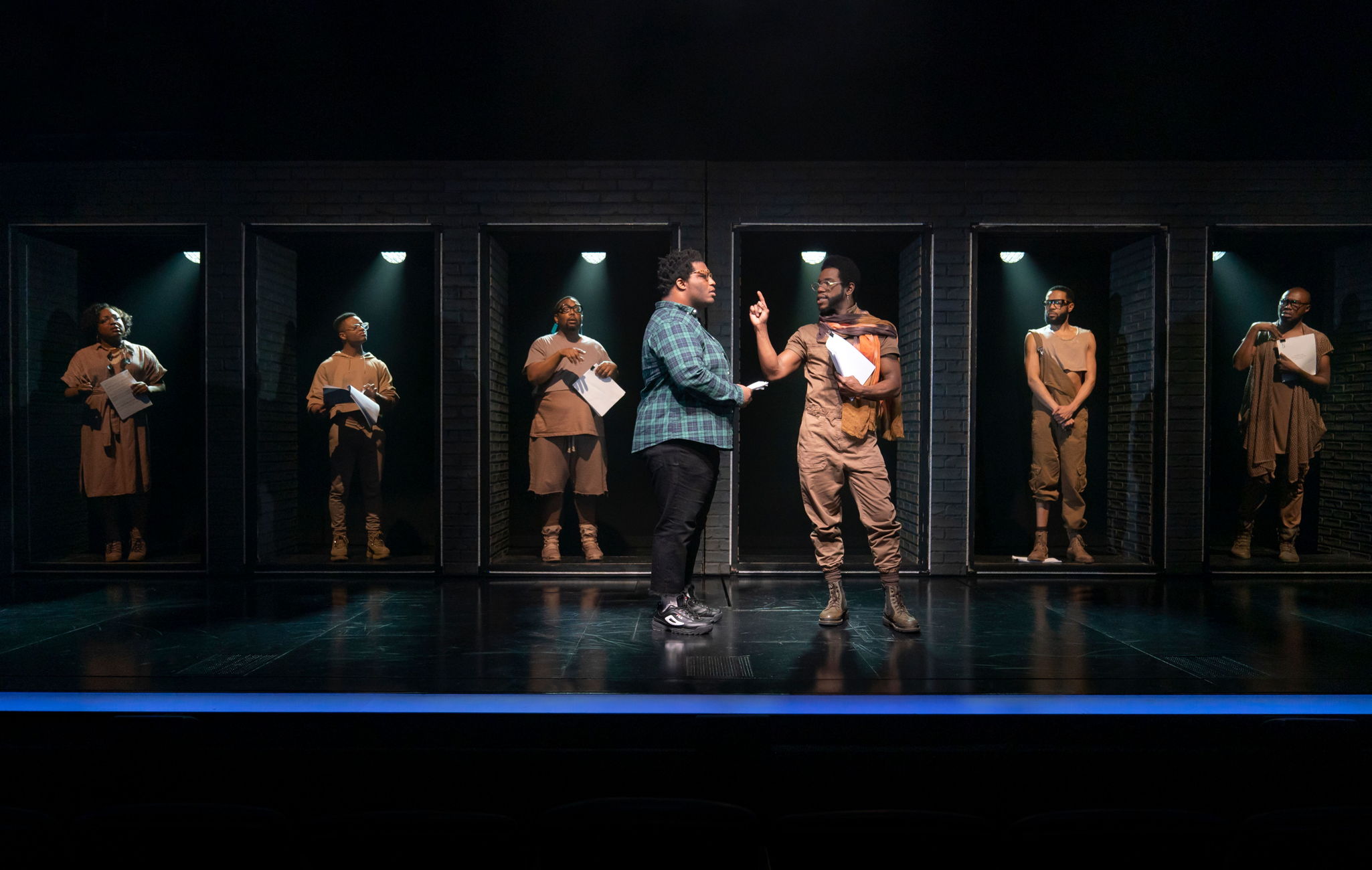 In the past few years, there have been a healthy number of beautifully crafted, wonderfully acted, and solidly produced Black-centric plays both on Broadway and Off that have examined from every conceivable angle – historically, sociologically, and psychologically – what it means to be Black in the United States, both past and present.

To jog my mind as well as yours, New York theatres have hosted Father Came Home From The Wars, Choir Boy, The House That Will Not Stand, Fabulation, The Color Purple, An Octoroon, American Son, Daddy, The Secret Life of Bees, The Slave Play (previewing on Broadway this coming September), the still-running The Rolling Stone, and Pulitzer Prize-winning Fairview. Most all were favorably reviewed.

However, in A Strange Loop, which is currently running thru July 28th at Playwrights Horizons have we come across something we’ve not seen before: a many-faceted in-your-face gay male character like Usher (the extremely talented Larry Owens) who spares no detail, however raw, intimate, personal, scatological and sordid – and it is all of those and more – in the telling and showing of his life.

Be prepared for butt-fucking, simulated sex, dick and pussy talk, scabrous asides, and kamikaze attacks on Beyoncé and Tyler Perry.

Fleshing out the story is an extremely accomplished, athletically enhanced cast of six males (James Jackson Jr,  John-Michael Lyles, John-Andrew Morrison, Jason Veasey, Antwayn Hopper), and one woman (a simply wonderful L Morgan Lee). Like dancing dragonflies, thanks to the fine direction of Stephen Brackett and choreographer Raja Feather Kelley’s inventive dance moves, flit in and out of every scene. Often posing and primping, we see them at Usher’s home, church, and on the subway.

Credited in the program as Thoughts # 1 to #6, each of the actors plays numerous characters including Usher’s parents, a casual sex partner, a would-be producer, church congregants, and the likes of Whitney Houston, James Baldwin, and Harriet Tubman.

Like magpies, they all voice Usher’s innermost thoughts. Sometimes they appear to be on Usher’s side, both supporting and guiding his endeavors. More often they take a more nasty road by reminding him that he is just a fat, Black, worthless, self-loathing 25-year-old working as an usher at Disney’s The Lion King.

To get a pre-show inoculation as to whom you will be dealing with, listen to Usher as he tells the audience at the very beginning of the play in exacting detail in what light he sees himself and where he is at this very moment in time.

“…there will be a young overweight –to- obese homosexual and/or gay and/or queer, cisgender male, able-bodied university and graduate-school educated, musical-theater-writing, Disney-ushering, broke-ass middle class far left-leaning Black-identified and classified American descendant of slaves full of self-conscious femme energy and who thinks he’s probably a vers bottom but not totally certain of that obsessing over the latest draft of his self-referential musical A Strange Loop.”

A Strange Loop, as playwright Michael R. Jackson writes in the program, though “not formally autobiographical,” does faithfully mirror the playwright’s early beginnings. “I began writing it as a monologue in my early 20s when I experienced myself as nothing more than a mass of undesirable, fat, Black queerness. I was functionally miserable, relentlessly self-critical, and very lonely. It was like I was on the outside of my body looking in and on the inside of my body scratching to get out.” Yes, in this play Usher is the playwright’s doppelganger.

From Intermission Song, the play’s first rollicking musical number, more exciting than most Broadway musical opening numbers, it is obvious that Jackson (he wrote the book, music, and lyrics) is a force to be reckoned with. It is equally obvious that Owens, here dressed to the nines in his red and gold shimmering Lion King’s usher’s outfit (by Montana Levi Blanco), is uber-talented.

Though there are a number of short fly-by scenes, the two longest and most powerful ones involve an impassioned speech-making church pastor channeled by Usher himself, who attacks homosexuality and everything gay. “AIDS is God’s punishment,” he shouts over and over. The second weightiest scene is a Tyler Perry sequence which raises all of Usher’s hackles. Tyler Perry “puts crap on the stage, film, and TV making my bile to rise. He writes ‘bout fat (un-huh) Black women with weaves (un-huh) finding love and redemption with muscle-bound black men who own they own business and truly love the lord.” Nothing that he writes, Usher says, “seems real to me.”

The big game-changer, unexpectedly dropped into Usher’s lap, is an offer to write a gospel play in the vein of Tyler Perry. And everybody, including the piss poor Usher himself, weighs in on this. One of his Thoughts suggests that he make a play “about slavery or police violence so that your allies in your audience have something intersectional to hold onto.” His religious church-going mother, to whom Tyler Perry and Barack Obama are “gifts from God,” sides with those that want a clean, God-loving gospel play. Of course, Usher’s eventual gospel effort which alienates everybody but the audience (who find themselves rolling in the aisle) has other thoughts. “It’s true. I’m still emerging…looking to make my start but not so hungry that I’ll ride the chitlen circuit.”

All I can say about this tell-all, over-the-top play is that you are in for a relentlessly exciting intermissionless hour and forty minutes with enough twists and turns, and tears and laughter to throw you out of a car. So, as Bette Davis warned in All About Eve, hold onto your seatbelts as it is going to be a bumpy ride. And if you gotta pee, you best do it before taking your seat.

A Strange Loop opened Off Broadway on June 17, 2019 at Playwrights Horizons at 426 West 42 Street in New York. It closes July 28, 2019. Directed by Stephen Brackett, it has a running time of 1 hour and 40 minutes without an intermission. For more information, or to buy tickets check out www.playwrightshorizons.or  call 212-279-4200.