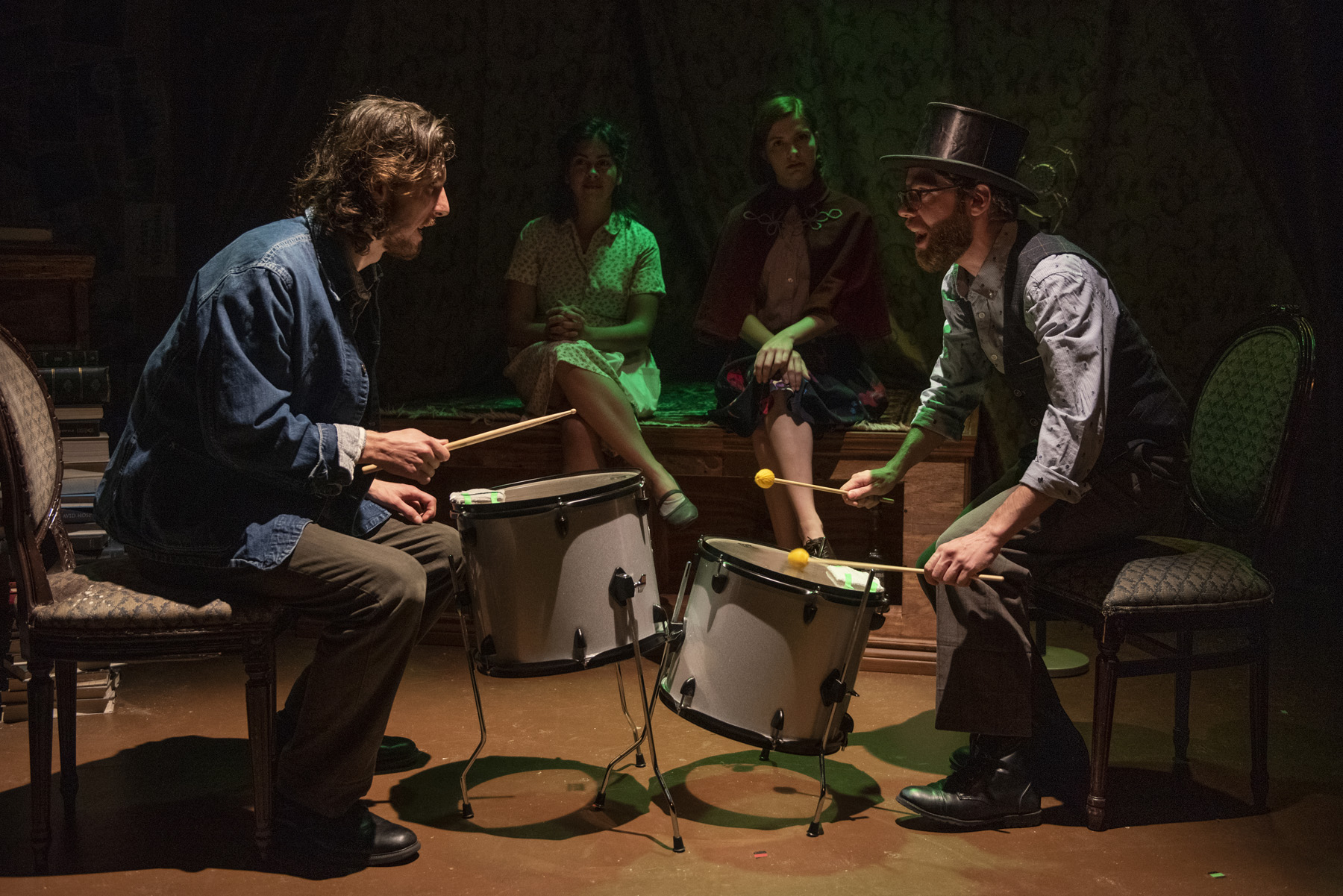 As much as I tend to enjoy good theatre of any ilk, I admit to having a particular fondness for the creatively unusual, and Black Button Eyes, with its focus on the surreal, the magical, and the macabre, can always be counted on to fill the bill. Their current production, Ghost Quartet, is without a doubt the most unusual show I’ve encountered in a long time, and I absolutely loved it. This 90-minute song cycle from Dave Malloy, the creative force behind Natasha, Pierre, and the Great Comet of 1812—itself based on a very small segment torn from the middle of War and Peace—is based on an entire pastiche of familiar sources from Edgar Allen Poe (whose life and works director Ed Rutherford also explored in last year’s Nevermore) to The Arabian Nights to Grimm’s Fairy Tales, with a little Thelonius Monk thrown in for good measure. It is without a doubt the most inventive and unusual show of the year so far.

Rutherford’s four-person cast completely sucked me in from the get-go. Even earlier, actually: this multi-talented and highly personable foursome hangs out on stage before the show and engages those who happen to be sitting close enough (I was in the front row) in conversation. Once the actual production begins, TJ Anderson, Alex Ellsworth, Rachel Guth and Amanda Raquel Martinez, each of whom plays multiple characters and musical instruments during this enjoyable, bizarre and complex mishmash of stories, carry us along through an interweaving, circular, fantastical tale in which all of them may or may not be ghosts.

The main conceit of the piece is that we are experiencing a four-sided musical production. (Each chapter of the tale is denoted as a “track” on the recording.) The central story, which binds the rest together, involves a woman named Rose and her sister named Pearl. Rose (Guth) is in love with an astronomer (Anderson), but discovers that he actually loves her sister (Martinez). Enraged, she seeks out a magical Bear (Ellsworth), who sends her off on a quest through time and space (and other stories) to seek four items it says are needed to help her exact her vengeance. Each step of that Into the Woods-like journey leads to another “track” in the recording and therefore another chapter of the tale.

The various stories are interlaced and repeat themselves, helping the audience to start to see the connections among them, which are complicated and rich. Even if you don’t fully understand, though, there is so much here that it is possible to enjoy even fragments of the show, and these ingratiating performers, all of whom possess beautiful singing voices, sell it all with enormous joy and vitality. And, yes, I recognize the irony of using that particular word to describe ghosts. But the four cast members invest so fully in this material and seem to be having such fun with it along the way that their energy is fairly contagious. And Malloy keeps us jumping around with musical compositions with roots in such genres as jazz, gospel, honkytonk-infused country, and folk ballads, many of which are simply glorious. My favorite moments include a pointed percussion duet showing an argument between a father and a son (Anderson and Ellsworth), a plaintive ballad by a woman who has made a fatal error (Guth), and a brilliant moment in which Martinez tells a story replete with all sorts of exaggerated facial expressions at a “microphone” directly in front of the audience. The cast is equally adept at the seriously dramatic and the very comic, and Malloy’s script gives them plenty of both to work with.

The production is played out on a busy Jeremy Hollis set featuring all sorts of props pertaining to the stories, and Rutherford gets the most out of it, finding numerous ways to vary his stage pictures in a small space, and choreographer Derek Van Barham too uses the stage beautifully. The set is lit hauntingly by Liz Cooper with projections by G “Max” Maxin IV, and musical director Nick Sula joins in the instrumental fun from behind a curtain. Ultimately, though, it’s up to the performers to hook us into this eerily entangled and intricately crafted show, and they do. Ghost Quartet is not your average theatrical experience, and it does demand some work from its audience, but it is well worth the effort. And there are so many pieces to this time-traveling puzzle of a show that I can’t imagine anyone who can’t find something to enjoy.

Ghost Quartet is a Black Button Eyes production now playing at Stage 773, 1225 W. Belmont, Chicago through August 17. Check the website for specific dates, times, and tickets. Find more information about current plays in our front page recs and at theatreinchicago.com.