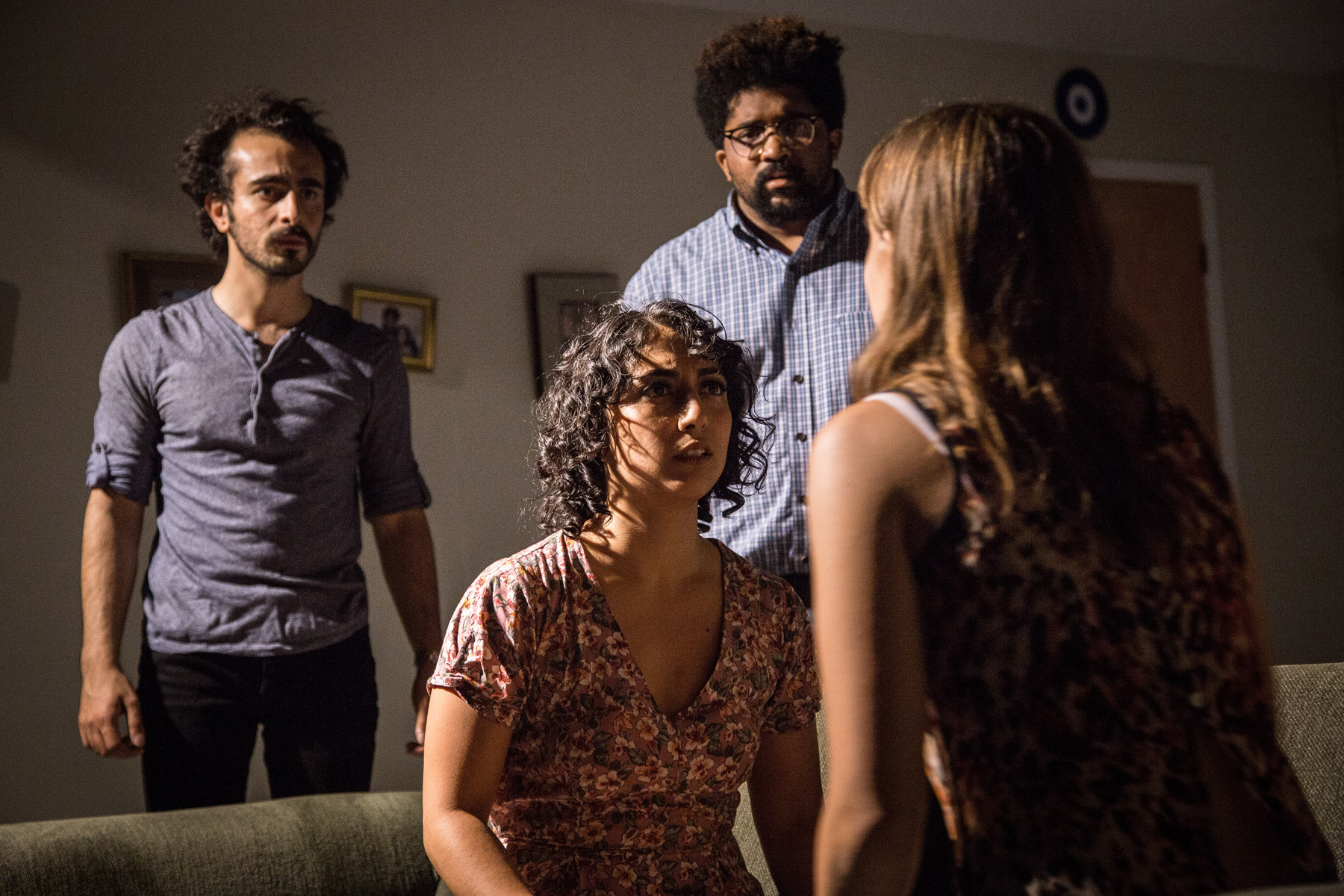 I am on record as saying that I enjoy it when theatres engage in unusual types of plays. In the past week alone I’ve seen three shows (Ghost Quartet, Strange Heart Beating, and Wolf Play) that are, shall we say, off the beaten path, and I have thoroughly enjoyed them all. I have, however, discovered that I have a limit.

Kiss, the new production by the recently rebranded Haven, is difficult to describe. I mean that literally: the play is so completely dependent upon unforeseeable twists and switchbacks that almost anything I could say about it would spoil some of the experience of the performance. Honestly, though, I wish I could be specific about it: without specificity, I fear that I will be unable to express my reactions clearly enough. I’ll do what I can.

For its first half an hour, this play is precisely what it purports to be: a small, intimate show about four friends (in Damascus) who get together every week to watch their favorite soap opera. It seems, though, that their own lives have as many awkwardly wonderful moments than any soap: the two men are both in love with the same woman (and in fact individually intend to propose to her tonight) despite the fact that one of them has been dating her best friend. Over the first thirty minutes, this plays out with all requisite melodrama, even soap opera style lighting (by Claire Chrzan) and underscoring (by Jeffrey Levin). Monty Cole, who also plays one of the friends, directs with an enjoyable comedic touch that makes it feel as if we are watching a parody of a soap performed live. He and the other members of this talented, sincere quartet (Salar Ardebili, Arti Ishak, and Cassidy Slaughter-Mason) throw themselves into the material (especially Ishak, playing the object of both men’s desires, who channels the kind of intensity that can pull even a mediocre show along with her). It’s all really fun, and the audience, laughing at the over-the-top actions of the characters, sits in the dark enjoying the play.

Suddenly, though, everything changes, and here is where I can’t go into any kind of detail at all. Suffice it to say that we find ourselves suddenly watching something different altogether, something that is seemingly improvised (though it isn’t), meandering, far more talky and less dramatic…until things shift again and everyone is forced to re-evaluate everything that they have seen. Ultimately, we find that we are watching a show where the Syrian setting (which seemed somewhat random at the start) is a critical component to understanding the play at all.

Americans (like the audience at the Den Theatre) often find ourselves making assumptions about the rest of the world that reflect our own experiences and fail to recognize the vastly different kinds of lives people live elsewhere. That includes those who put on plays set in foreign lands. Unless we have a true understanding of the stories we are trying to tell, we may do them an injustice, and Kiss makes that problem crystal clear. In Hamilton, we hear about the importance of “who lives, who dies, who tells the story,” and a play such as this one points to the critical importance of getting the story right from the perspective of the original storytellers.

This strong, enthusiastic ensemble (which also includes Gloria Imseih Petrelli and Sami Ismat) seeks to remedy that through Guillermo Calderón’s complicated script. It isn’t fully successful, though, partly because it goes on too long: the last hour of the 90-minute piece often feels repetitive. Points are made and then remade; monologues and scenes feel forced and artificial, even when delivered by these earnest actors. Though the last moment is truly heartfelt, the play could come to an end half a dozen times before it does (honestly, I felt as if I were watching The Return of the King or some similar production that doesn’t know how to bring itself to a close). This show is a sincere, thoughtful endeavor, and Calderón’s idea is worthy, but the intentionally self-interruptive format utterly confuses and disengages the audience just when it needs us to feel it the most.

Kiss is a Haven production now playing at the Den Theatre, 1333 N. Milwaukee, Chicago through August 18. Check the website for specific dates, times, and tickets. Find more information about current plays in our front page recs and at theatreinchicago.com.