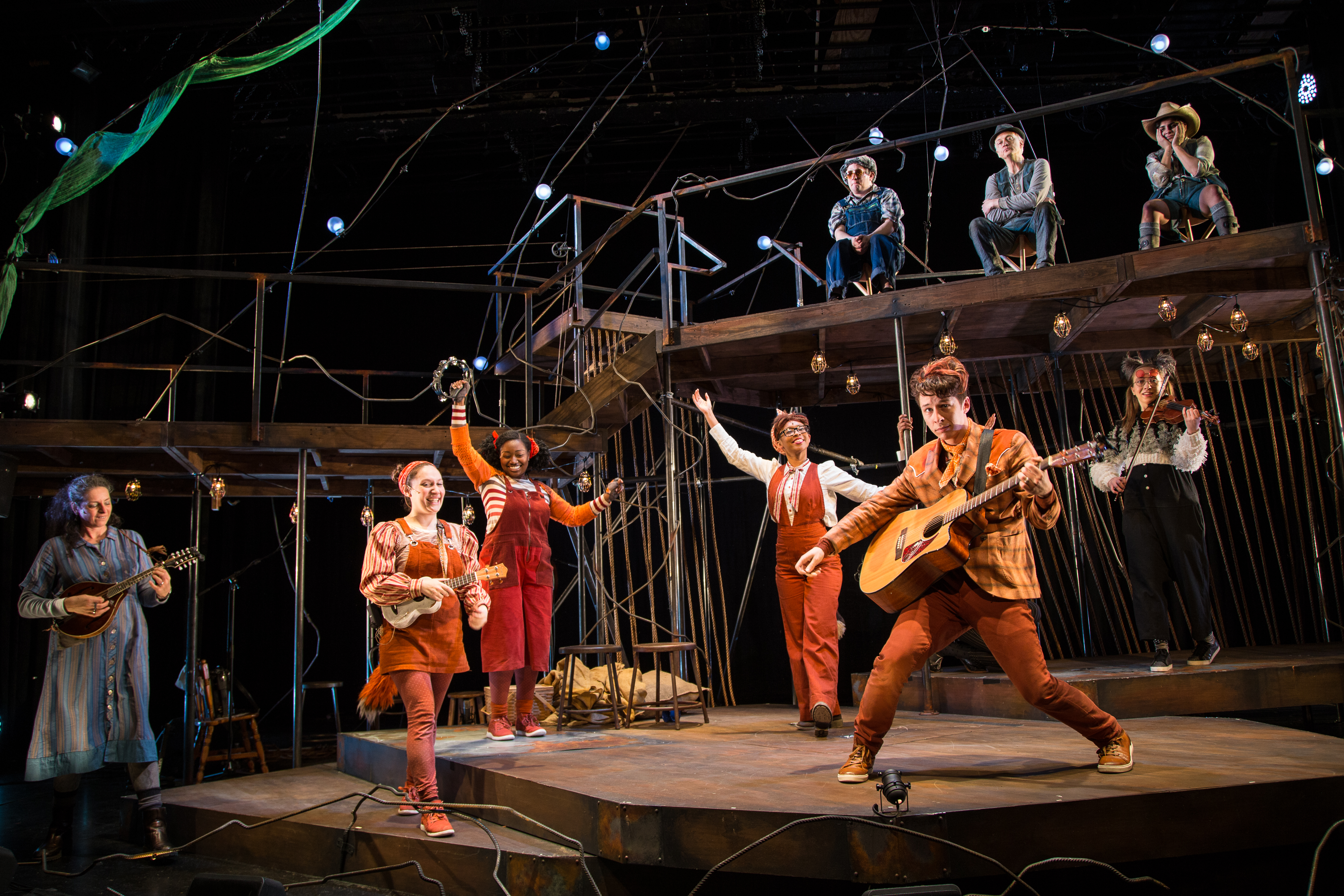 I have a complicated relationship with Roald Dahl. I know he is a celebrated children’s author whose books transcend time and have been adapted into performance pieces of all sorts as a result. One of my all-time favorite movies is Gene Wilder’s version of Willy Wonka and the Chocolate Factory and I still get a chill down my back when I think of the 1990 movie The Witches. However, other times when I have experienced Dahl’s work, I have found it slow, strange and confusing and I am not always sure I like it. So was the complicated relationship I had with the Emerald City Theatre Company’s production of The Fantastic Mr. Fox.

The Fantastic Mr. Fox was not a Dahl story I was familiar with (and yes, I have been admonished several times for not having seen the Wes Anderson movie!), so I was ready to be totally transported into an unfamiliar story. And that was one of the best parts of this particular production. For the studious theatergoer, like my seven-year-old son, there was a program especially designed for kids that he dove into as we waited for the production to begin. It asked him to make some predictions about the story and think about what he was going to see. Not long after we began our in-depth discussion from the program prompts, a lunch bell clanged and slowly, musicians and actors began appearing onstage. I checked my watch to see that there was still several minutes left before the show would start and now the sensory portion of our transportation into Mr. Fox’s world began.

The actors in full costume but not necessarily character (when asked his name, the actor who played Mr. Fox responded to the little girl behind us “Mario”) moved around the theater house, playing instruments and enticing us to sing along. Beach balls were bouncing about our heads and actors blew bubbles for the children to chase. Within moments, the audience was a part of a raucous outdoor party, for whom or what we didn’t know, but we didn’t care. We were laughing and singing and having a good time until a few minutes later, the lunch bell clanged again and the actors moved back to the stage, picked up the picnic that had been laid out, the lights dimmed and the show began.

For the few you out there who like me are unfamiliar with Dahl’s The Fantastic Mr. Fox, it follows the story of Mr. Fox and his family who live in a hole under a big tree and plunder the nearby farms for survival. When the three farmers become fed up with the foxes’ thievery, they decide that against all odds, they will get Mr. Fox and his family. Their dastardly plans put the fox family and all of their digger friends on the brink of starvation and it is up to the fantastic Mr. Fox to save everyone.

I have seen a variety of children’s theater productions over the past few months and this show was by far the most technically stimulating. The multi-story pipe set with green drapery to imply the tree, designed artistically by Michelle Lilly, gave director Jacqueline Stone the ability to create so many different spaces within the unit set. And she used them creatively taking the audience in the fox home, to the farms and under the tree. The audience could easily see and believe the farmers were sitting above the foxhole while at the same time, we could see the foxes trying to figure out their next move. The use of lights, designed by Keith Parham, and sound, designed by Jeffrey Levin was also a sensory delight. Sounds of the outdoors calmed us, clanking shovels unnerved us and digging tractors terrified us. At the same time, the warm glow of the foxes’ den made us feel safe while the stark darkness outside their home kept us on edge.

Of course, a play is nothing without the actors to tell the story, and the cast worked hard to draw in the kids in the audience. I could not keep my eyes off of Mr. Fox, played by Mario Aivazian. Dressed in a fox colored suit designed by Alison Siple with orange tints in his bushy hair, he moved across the stage in with dance-like motions. Aivazian conveyed the love of father and husband with the vulnerability that brings, particularly when ones’ loved ones are in danger. Aivazian’s slinky, fox-like moves connected in a beautiful, loving way to those of Mrs. Fox, played by Tia Pinson as they almost danced their love for one another. The quick, foxy actions of their children played by Rebecca Keeshin and Adhana Reid offset the smoothness of their parents but helped with the anthropomorphism of the characters. In contrast to the beautiful foxes were the clumsy, dimwitted farmers, Bunce, played by Isa Arciniegas, Boggis played by Aaron Lawson and Bean played by Jeffrey Hoge. Their awkward clothes, movements and speech let us know that the mental abilities of the clever Mr. Fox far outweighed those of the bumbling farmers and early on, I knew my son’s prediction of who be victorious in the end would be correct. Finally, I would be remiss if I did not mention Jeanne T. Arrigo and Elleon Dobias who, along with small ensemble roles in the show, provided the folk music backdrop throughout. I lost track eventually, but between the two talented women I counted at least 6 different instruments played.

My two notes of warning on this beautiful show…perhaps where I circle back to my complicated relationship with Roald Dahl himself. First, there are some very dark and scary moments. I was afraid, my seven-year-old was afraid, and the smaller children around us were definitely afraid, particularly when one of the young foxes was in peril. Second, I found the first act quite slow, despite the brilliant acting and tech. And I don’t think I was alone as about 15 minutes in, the theater started to echo with the crinkling sound that as a mom, I know so well- reaching into the purse for a small snack to keep the little ones quiet. However, the second act moved fast and kept our attention. Overall, for the beautiful acting and the amazing introduction to how important the technical aspects of theater are in creating the story, I would recommend The Fantastic Mr. Fox for those both with complicated and uncomplicated Roald Dahl relationships.