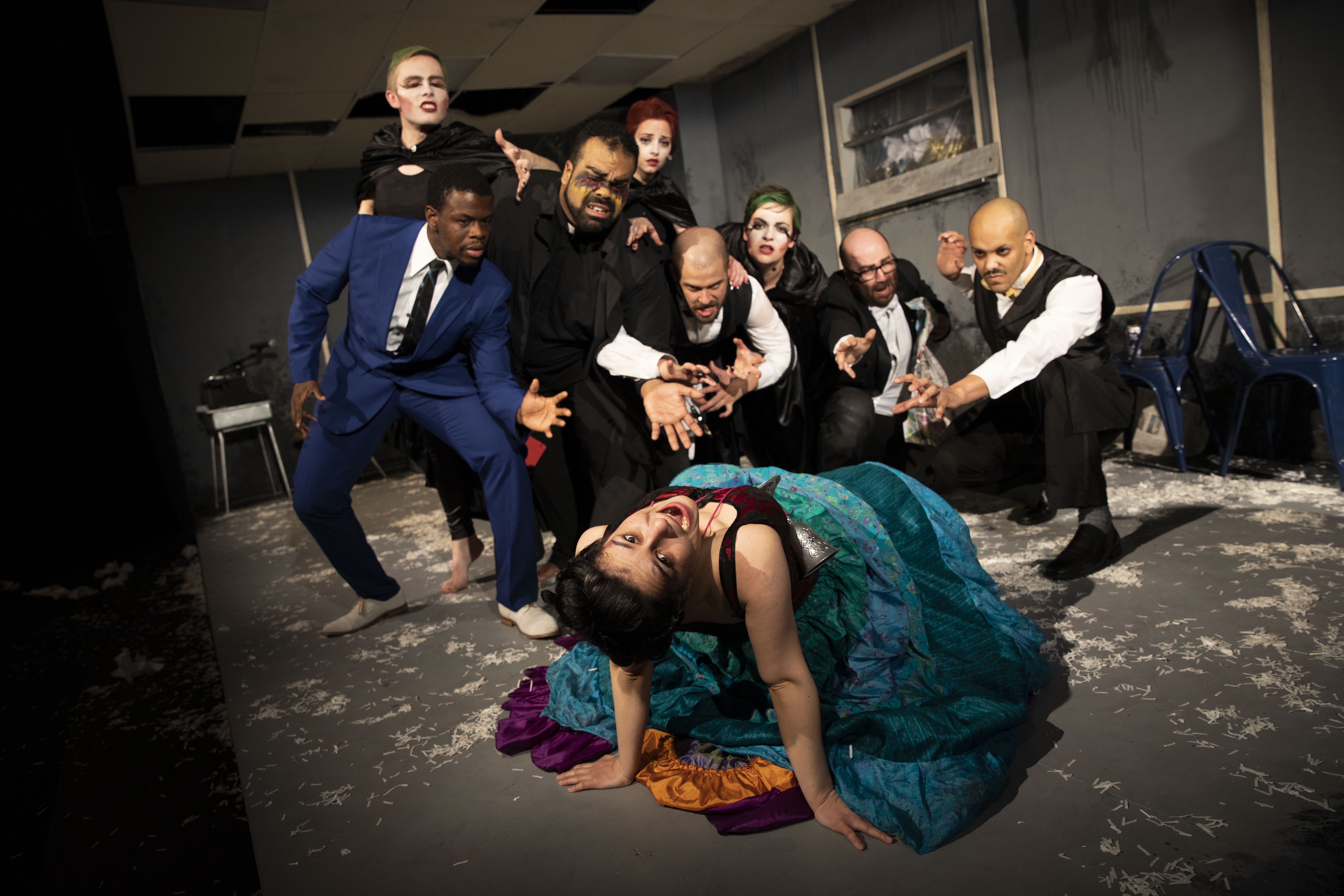 There is a reason I have a yellow light category, and Trap Door Theatre’s The Old Woman Broods explains it perfectly. Here is a play that is wonderfully performed and directed with visual and auditory panache, yet it is one that I am ill at ease recommending to everyone, and the reason is simple: like most of Trap Door’s fare, this Polish avant-garde play by Tadeusz Rózewicz isn’t meant for everyone. It is a play that demands a lot from its audiences; this is not a “sit back and watch” kind of experience. Its in your face performance and fragmented structure make it something that aficionados of this type of production will find fascinating, fun, and funny, but others may leave shaking their heads and wondering what it was they just saw. Still, this tiny theatre (found down a long alley and through a bar on Cortland Street) continues to provide powerful and provocative experiences for its audiences.

Róziwicz’ script is a series of moments undulating within each other. Its central figure, the Old Woman (played with high energy by Manuela Rentea), is brooding in two senses of the word: she is worried about the state of the world she lives in and she is desperate to do the one thing she has not done in her long life: bring children into it. That may seem contradictory, but the message seems to be that youth might be able to repair the damage older generations have caused, whether that is environmental or social. She and the Waiter (Michael Mejia-Beal, the other central figure in this play) go back and forth about man’s propensity to destroy what he has, whether it is flowers and trees or society itself (through war).

Add to this a trio of mysterious women (David Lovejoy, Anna Kloss and Emily Nichelson) wearing dark robes who silently (at first) cast judgement on the old woman and the world, a man named Cyril (Dennis Bistro) who argues with her over the choices man makes, a blind man (Miguel Long) who longs for simpler times, a doctor (Carl Wisniewski) who promises the possibility of reproduction to even someone this old, and a Narrator (Keith Surney) who sets the stage like the Stage Manager in Wilder’s Our Town and you have an interesting, volatile mix of people who are here to show us both the terror and hope of our world. That Róziwicz wrote this play in 1969 indicates a kind of nearly prophetic understanding of mankind.

Trap Door member Nicole Weisner directs the play with attention to both the terror and the possibilities of today’s world. The old woman lives in some plain of existence not entirely within the play; she spends a lot of time talking (and yelling) directly to the audience, which is thereby included in the action. The play also periodically, just when it starts making sense, breaks down into chaos, a reminder that we are always one step away from destruction. But Weisner also creates significant beauty through original music by Danny Rockett and powerful, at times beautiful stage pictures. The inner world of the Old Woman, who keeps asking the Waiter for her food, is disrupted by the news of the outer world, which never fails to wreak havoc on the proceedings as the Waiter stops the action and delivers it in a frantic, frightened manner.

While she is brooding over the lack of tripe on her plate, through, what the Old Woman really wants is to have a baby. Midway through the play, she does so, and Surney plays double duty as her son. But even her efforts to withstand the outer turmoil of the world seem doomed because the forces of destruction are greater. The omnipresent chaos of war and environmental disaster is catching up with her. And the three weird women become the harbingers of catastrophe.

The Old Woman Broods is a brilliantly directed and performed satire about the lack of control we have over ourselves and our world. It is not a play to watch superficially; you’ll need to work with this one, but the work will be rewarded. Trap Door once again proves itself to be the best place in town to see avant-garde theatre. If this kind of theatre is something you enjoy, you’ll definitely like The Old Woman Broods.

The Old Woman Broods is now playing at Trap Door Theatre, 1655 W. Cortland, Chicago until Jan 19. Check the website for specific dates, times, and tickets. Find more information about current plays in our front page recs and at theatreinchicago.com.