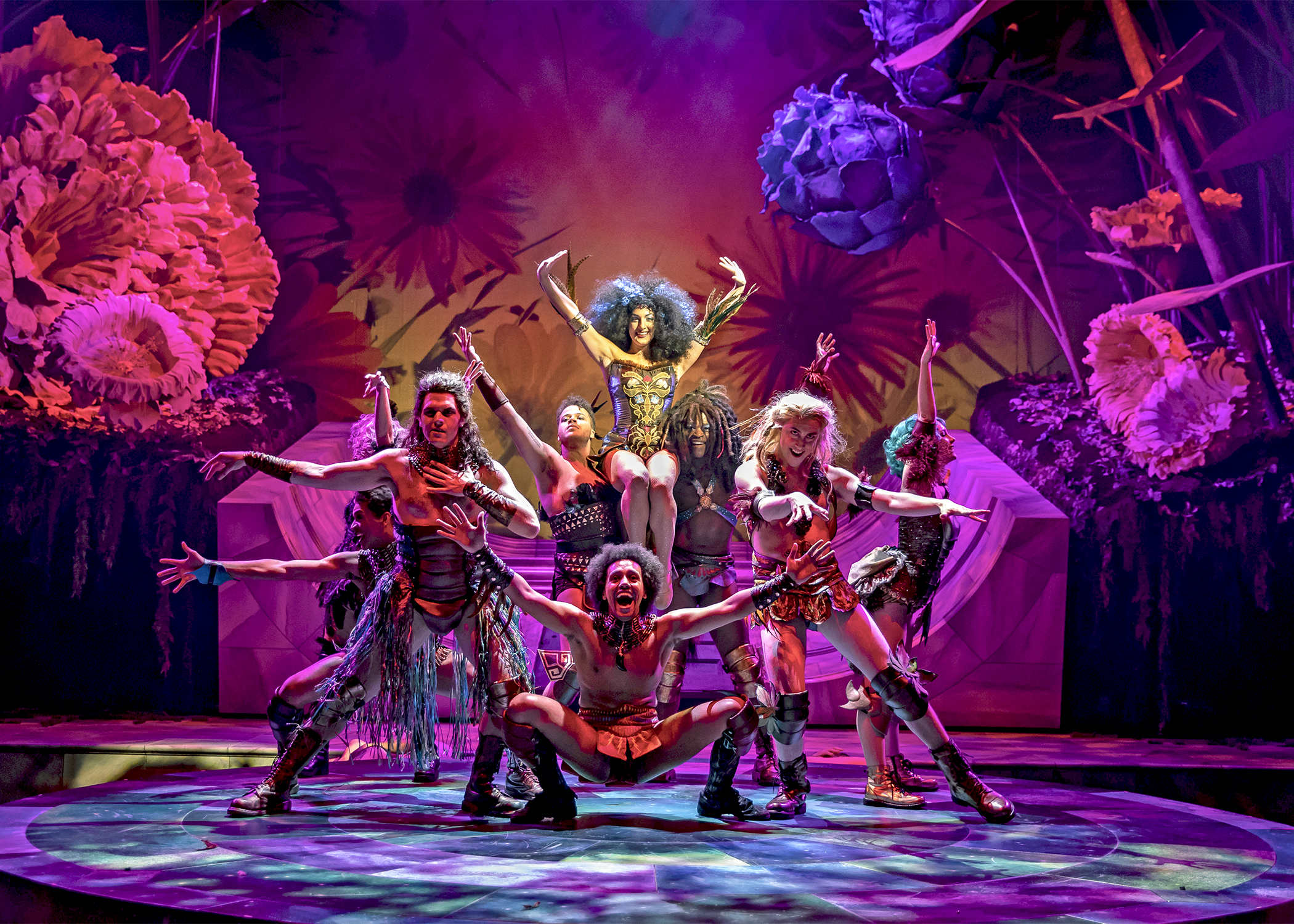 Singing and dancing fairies. Giant Hieronymus Bosch-influenced flowers. A Puck who appears in midair. Half-naked lovers. A gigantic sluice in the middle of the forest. Joe Dowling’s tenth time directing Shakespeare’s A Midsummer Night’s Dream brings the classic comedy into the 21st Century (the mechanicals even take a selfie!) but the magic remains intact as his cast responds to his obvious love for the material with one incredible performance after another in a seamless production that is utterly engaging from the first moment until the last.

One of Shakespeare’s most endearing plays, A Midsummer Night’s Dream tells the story of two worlds colliding: the rigid, imperial world of Athens in which a young woman (Hermia, played by Melisa Soledad Pereyra) can be put to death for disobeying her father’s word on a choice of husbands running smack dab into the wild, magical, unruly world of the fairy kingdom. The fairy realm is having problems: King Oberon (Edward O’Blenis) and Queen Titania (Alexandra Silber) are at odds, and this spills out into the real world as well, mixing up seasons and confusing mortals like us, who clearly are laboring under the delusion that it is midwinter. (Global climate change here is the fault of the fairies, not the humans, a pleasant thought for those who still don’t want to believe in it.)

Similarly, the world of man is undergoing changes. Duke Theseus (O’Blenis again) has won the Amazon Queen Hippolyta’s hand in battle and is getting ready to marry her, but Hippolyta (Silber) is not yet ready to accept her fiancé’s love. Dowling shows us instability in the leadership of both realms, extending the play’s parallel structures. Of course, this is a comedy, and comedies end happily with marriages, so both Hippolyta and Titania will be soothed by the time it is over.

They are not the only lovers present in the play, though. Hermia and her true love Lysander (Tyrone Phillips) take to the woods in an effort to escape the death her father Egeus (William Dick) has imposed on her for disobedience, and they are quickly followed by Helena (Cristina Panfilio) and the man she loves, Demetrius (Eric Schabla), who has dumped her for the prospect of marrying Hermia and is Egeus’s choice for his daughter. The four potential lovers are met in the forest by the mischievous fairy Puck (Sam Kebede) who, through magic, mixes up their affections, leading to much merriment for the fairies who stand invisibly watching the mess he has made.

Also in the woods is a group of amateur players Puck dubs “rude mechanicals,” led by “Grey’s Anatomy” star T.R.Knight as Bottom, a man with little talent but loads of confidence. They are in the woods practicing a play for the nuptials of Theseus and Hippolyta. In perfect symmetry with the rest of the play, they are performing a love story, albeit a tragic one: the story of Pyramus and Thisbe. However, they get caught up in fairy pranks when Puck replaces Bottom’s head with that of an ass (brilliant work by make-up artist Richard Jarvie) and sees to it that the Fairy Queen falls in love with him. Mischief managed, the stage is set for loads of fun as the various lovers play out their magic-induced roles.

The tech side of things, as one would expect from Chicago Shakespeare, is perfect. Todd Rosenthal’s scenic design is outstanding. Several scene changes are completely surprising and wonderful, as the mystical forest looms just outside of rigid Athens. Fabio Toblini’s costumes are also great, especially those worn by the fairies, which contain wilderness echoes of the militaristic outfits of Athenian soldiers. Original music by Keith Thomas and outstanding sound design by Christopher M. LaPorte surround us in the fairy presence, and the lighting by Greg Hofmann and Jesse Klug is stunning.

But it is Dowling’s vision (at times aided by Joe Chvala’s brilliantly frenetic choreography) that makes this Dream into one to remember. From flown-on fairy settings to the mechanicals’ crude efforts at creating a wall and moonshine (and a marvelous costume for Dick’s Lion), this is a play that renders fantasy visible. And when Thisbe (played by Alec Silver) dies a serious and tragic death at the end of her otherwise goofy play, we know we are watching something special. I’ve seen many Thisbe deaths, but I’ve never seen one quite like this one, which has real power and emotion coming from the unlikely source of a mechanical who never wanted to play the female role in the first place. Following Knight’s absurd Pyramus death scene, Silver’s realistic one creates sharp contrast, underscoring the “tragical mirth” promise that Peter Quince (Joe Dempsey) makes to Theseus to get him to select the play.

Dowling’s portrayal of the lovers is also wonderful. The silly arguments of the bewitched Athenians are enhanced by some really inventive staging, and Panfilio, Pereyra, Phillips and Schabla all give excellent performances as these city folks under the impish devilment of the fairies. Schlaba’s singing of Helena’s name is hilarious every time, and the breakdown of the women’s real friendship into ugliness caused by the roguery (and occasional incompetence) of Puck is pure comic pleasure.

Puck himself is a wonderful creation. One of Shakespeare’s most outrageous and memorable characters, he is brought to wild and frolicsome life by Kebede, who enjoys every second he is onstage. This Puck also seems to have a bit of a relationship with First Fairy (Adrienne Storrs), whose singing and dancing and enhanced role here make her a more focused character than one usually sees. These two, whose relationship is based on playfulness, make for an interesting punctuation mark on the night of romantic frivolity.

It is never easy to tackle a show as well-known as A Midsummer Night’s Dream and make it yours, but Dowling and Chicago Shakespeare Theatre simply own this play and have since he directed it for the very first CST season on Navy Pier in 2000. 2018’s Dream is simply brilliant in every way, and audiences are going to love it.

A Midsummer Night’s Dream is now playing at Chicago Shakespeare Theatre, Navy Pier, Chicago until Jan 27. Check the website for specific dates, times, and tickets. Find more information about current plays in our front page recs and at theatreinchicago.com.