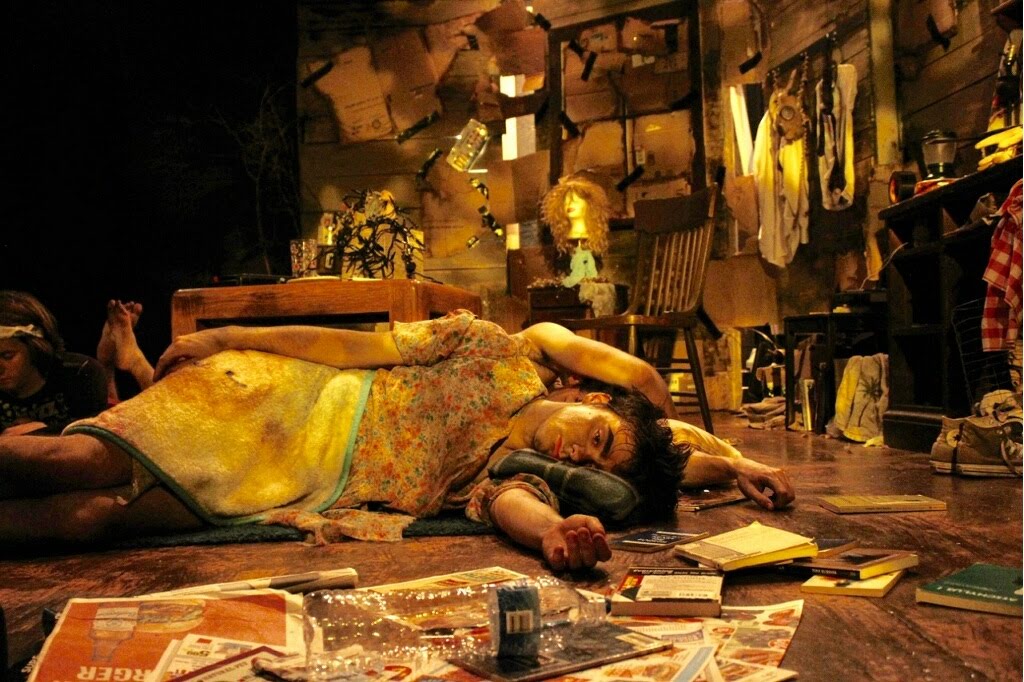 Some say the world will end in fire; Some say in ice  –Robert Frost

According to the post-apocalyptic vision set forth in Henry Murray’s Treefall, now playing in a production by Exit 63, the fault will decidedly be fire. Terrible things have happened to the planet including widespread fires and horrific diseases, as mankind has killed off the protective ozone layer and left the Earth uninhabitable by day. In a small, dilapidated shack on the top of a mountain, three teenage boys huddle together to wait out the end of the world. Their parents have either succumbed to the pestilence or gone for help and never returned; either way, they are alone.

To pass the time, and to try to hold on to the memories of life before, the boys play that they are a nuclear family: Mommy, Daddy and Junior. When we come onto the scene, eighteen-year-old Flynn (Andrew Garcia) has assumed the role of Daddy and sixteen-year-old August (Shea Peterson) is Mommy, leaving fourteen-year-old Craig (Matt Schutz) as the child of the makeshift family. It’s clear from the opening that the game is wearing thin: August is sick of it and Craig is much more interested in playing scenes from Romeo and Juliet with a threadbare doll. But it is the game, and their worship at a literal altar dedicated to “The Mommy,” that holds them together and keeps them (relatively) sane, so the possibility of losing it frightens both Craig and Flynn. Enter Bug (Kirra Silver), a seventeen-year-old girl pretending to be a boy to survive on her own in what remains of the wilderness. As soon as her true gender is revealed, the boys’ carefully constructed world (already threatened by falling trees so close that one smashing the house seems inevitable) starts to come apart. The assimilation of Bug into their threesome adds depth to the questions of what exactly constitutes a family and (at least for young Craig) what a girl is anyway, and it adds conflict between the older boys about their feelings for her. August finds himself attracted to her, and Flynn instinctively knows that this could spell their doom. This is not quite Lord of the Flies, post-apocalyptic version. Things are bleak—even hopeless—but the boys keep trying to remain civilized (despite occasional fisticuffs). They scrounge for food and supplies in a local town (bringing home more books for Craig to devour and regurgitate); they sit and chat (under an umbrella) on the mountaintop; they bathe in a local spring. It’s possible that their small home will disintegrate, but they will not devolve with it as long as they have each other.

But it is the world itself that is disintegrating, and Treefall pulls no punches when it comes to the devastating effects of Global Climate Change. It is no polemic; whose fault it is doesn’t really matter when you’re in constant danger of frying. But Murray gets his points across clearly, as does director Connor Baty, who has arranged a cadre of designers that evoke Murray’s world beautifully. There is some wonderful lighting (by David Goodman-Edberg) and sound (by Teddy Gales), especially in the treefalls, when they quiver in the house wondering if this will be the one that ends it all. Jeff Simpson’s set is wonderfully decrepit and also versatile: there are spaces for actors to be outside of the cabin, creating variety and authenticity. Bailey Castle’s costumes are perfect, and Bill Gordon has done a remarkable job choreographing those fight scenes. All four actors are solid, with Schutz slowly becoming the main focus of the play. What happens to a young boy with no memory of our world? Schutz is appropriately overdramatic, throwing tantrums and talking with his doll, but it is through him that we see the true decay of civilization. Garcia and Peterson—both of whom actually play much too old for their scripted years—do a great job as two teens trying to figure life out through books and old newspapers. (Flynn’s explanation to Craig of the differences between male and female anatomy remind us of how naive he too remains.) And Silver, whose character not only brings femininity into the play but also alcohol (lots of alcohol), is dynamic as the outsider trying to see if she can fit into their odd circumstances.

It’s surprising that more playwrights don’t try to tackle Climate Change. It’s one of the most pressing issues of our era, but few plays try to deal with it. Maybe it is too real, too possible, to be entertaining, but it seems ready for exploration, and there are undoubtedly many ways of tackling it using the imagination of the theatre. Treefall makes a great place to start, and Exit 63 makes a good argument that more playwrights should try to deal with the impending catastrophe we are creating in our world.

On the day I saw it, the crowd was extremely sparse, and that is unfortunate: this show may be grim, but it deserves an audience. Murray’s imagination and Baty’s staging come together to make a powerful examination of family, gender, and global cataclysm, packed into a tidy 90-minute production. What more could you want?

Treefall is an Exit 63 production now playing at the Trap Door Theatre, 1655 W. Courtland St, Chicago, until September 2. Performance times vary; check the website at Exit 63 Theatre for tickets, schedule and times. Find more information about current plays on our Current Shows page and at theatreinchicago.com.