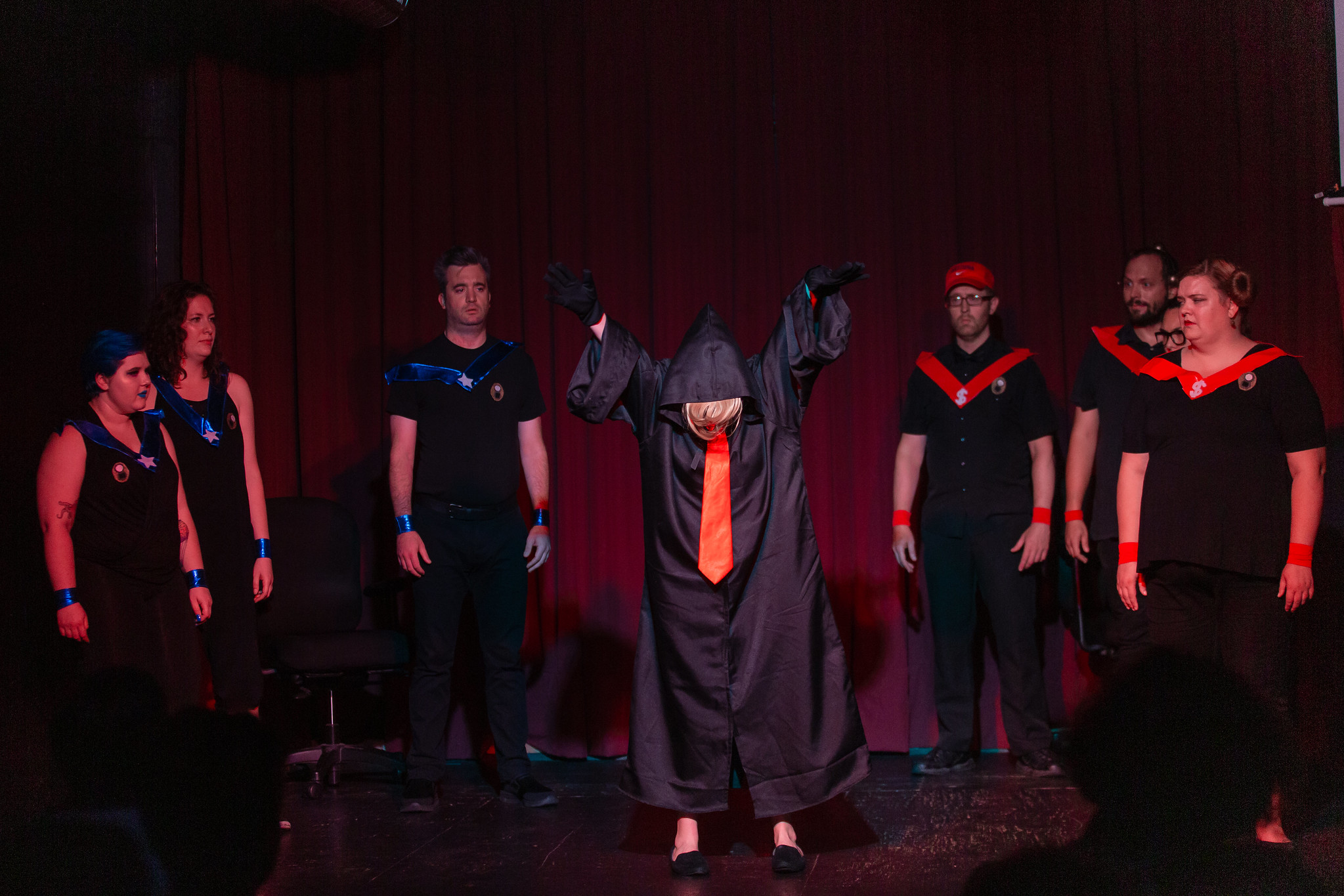 I strongly dislike writing negative reviews. I know that the cast and crew of any show work hard for a long time to create what they are presenting to the public, and a negative review can feel like a slap in the face. Also, I am not one of those critics who tends to find pleasure in creatively and cleverly razzing a bad or weak show. A pan is a pan, and a few quotable lines won’t change anything. Which brings me to Trump in Space, a two-year-old import from LA’s Second City that is currently being performed at Laugh Out Loud Theatre. Two years ago, this gentle satire might have worked fine, but that was before everything that the current administration has done to rip this country apart at the seams, destroy our political standing in the world, and threaten the world itself with its unilateral opposition to helping curb climate change. It is far too late for gentle satire: ask John Oliver, Samantha Bee, Stephen Colbert, or Trevor Noah, none of whom pulls any punches in their efforts to bring this President to task. Unfortunately, Trump in Space is less a true satire than a comedy sketch extended to the point where it just feels flat.

I don’t know what I expected of this show (though the notion of sending Trump into space sounds like a good idea, if we could arrange for it to be a one-way trip), but whatever it was I didn’t find it. Trump in Space turns out to be a satire without any sting. It postulates a future, four hundred years from now, when the earth is no longer habitable and the remnants of the GOP and the Democrats, still arguing over early 21st Century tropes, are in a desperate race to be the first to colonize a recently-discovered life-sustaining planet where, presumably, the losers will not be welcome. (Where the Russians, Chinese, Indians, Europeans, etc. are in all of this, I have no clue. Maybe they have terraformed Mars and refused to let us in.)

That the crew members have the last names of prominent members of our political scene (Sanders, Warren, Trump, Pelosi, etc.) at times appears to be the focal point for the jokes here, though the script manages to parody pop space memes as well. The cast, a nine-member ensemble anchored by Alaina Hoffman as Natasha Trump and Scott Cupper as Barack “Barry” Sanders, is extremely sincere and clearly has a good deal of fun under the direction of John Hildreth, but the material is weak as well as some of the singing voices, and the underlying love story doesn’t salvage it. Emily Brantz (who also choreographed the dance numbers), Caroline Nash and Niki Aquino do have moments when they shine, as does Ross Compton as an android named Kushner, but it isn’t enough. And the presence of a mysterious Emperor Palpatine-cloaked Executive with Trumpian hair and a long red tie often just feels weird and repetitive.

This show has enjoyed a long and successful run in LA, so maybe you might enjoy it a lot more than I did (yet another reminder never to take a single review as gospel), but from where I sit there are a thousand better ways to comically address the cataclysmic darkness that is the Trump era. A benign and mellow parody, though, is the comic equivalent of “there are good people on both sides.” Trump in Space tries too hard to be nice, and therefore simply lacks the penetrative, biting element necessary to shine a light on this administration. There are moments when it is fun, but overall even its one hour running time seems too long.

Trump in Space is now playing at Laugh Out Loud, 3851 N. Lincoln, Chicago through Sep 28. Check the website for specific dates, times, and tickets. Find more information about current plays in our front page recs and at theatreinchicago.com.